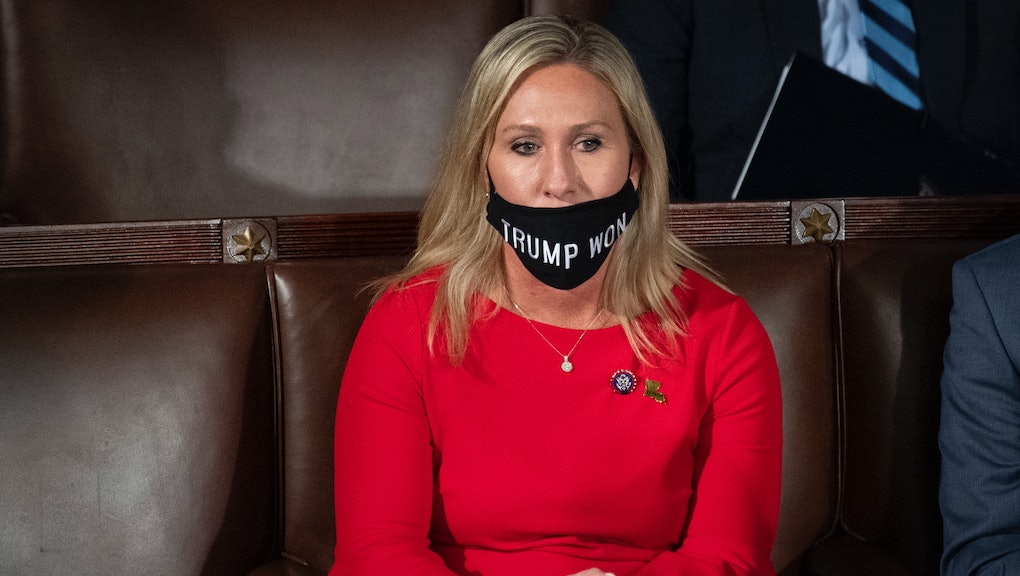 I can't believe I have to write these words but: No, one of the oldest banking institutions on Earth does not control an orbital death ray, and no, they did not use it to ignite California's deadly Camp Fire in 2018.

I have to write these incredibly stupid words because evidently freshman Georgia Rep. Marjorie Taylor Greene (R) has somehow managed to surpass an already-bonkers week of newly revealed crackpot theories thanks to a just uncovered Facebook rant from 2018 in which she suggested the wildfire — which killed 85 people and was the most expensive natural disaster of the year — was intentionally set by a cabal of political, industrial, and financial operatives, in order to clear a path to develop more of California's high speed railway.

The since-deleted Facebook post, first reported by Media Matters, is notable for being almost incoherent in its onion layers of conspiracy-mongering, as well as for the fact that – nestled within the speculating and aspersion-casting — Greene evidently believes the fire was caused by "solar space generators" which ... you know what, I'll just let her explain it herself:

If they are beaming the sun's energy back to Earth, I’m sure they wouldn’t ever miss a transmitter receiving station right??!! I mean mistakes are never made when anything new is invented. What would that look like anyway? A laser beam or light beam coming down to Earth I guess. Could that cause a fire? Hmmm, I don’t know. I hope not! That wouldn’t look so good for PG&E, Rothschild Inc, Solaren, or Jerry Brown who sure does seem fond of PG&E.

As it happens, Pacific Gas and Electric (the PG&E of Greene's above screed) was in fact found to be responsible for the Camp Fire, but due to a faulty electrical wire, and not a deep space heat ray. But this glancing collision with legitimate facts is largely nullified by Greene's invocation of the Rothschilds — the European banking family often used as a shibboleth for Jews en masse who have long been the victims, if not the progenitors of, the sort of anti-Semitic conspiracy theorizing now leveled at philanthropist George Soros.

Alarming as it is that someone elected by an overwhelming margin to help write America's laws appears to be so deeply removed from reality, Greene's labyrinthine "Jewish bankers collaborating with utilities giant and powerful politicians to cause 'natural' disasters for profit" is the sort of conspiracy theory that's both impressive in its creativity and hilariously pathetic the moment you rub two functioning neurons together and give it a moment's thought. Because even if you believe there's a giant space laser capable of blasting forest fires into existence across the western seaboard, Greene's theory — like most conspiracy theories of its ilk — fails to take into account the fact that pulling off this sort of thing would require a staggering degree of competence that simply does not exist in the human species. There is simply no way an assemblage of bankers, politicians, and businessmen could successfully secretly blast a heat ray from orbit without screwing it up somehow. That's just not how people, and projects of this scale, work.

Yes, Marjorie Taylor Greene is violent, dangerous, and malicious, and she belongs as far away from any lever of power as possible. But if you dig just marginally deeper into her professed beliefs, you'll also come to the inescapable conclusion that she not only buys into some crazy stuff, but she's pretty dumb, too.

More like this
I hope Marjorie Taylor Greene never logs off
By Rafi Schwartz
Ronald Reagan's would-be assassin is about to get a full, unconditional release
By Rafi Schwartz
Oops, the Arizona recount the MAGA crew demanded actually took votes away from Trump
By Rafi Schwartz
Stay up to date