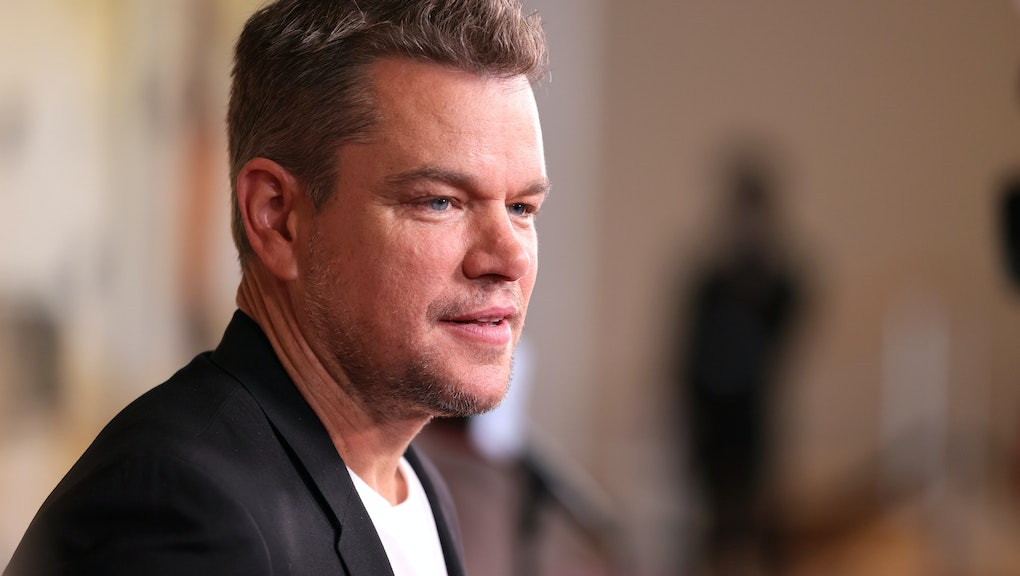 Shall we all take a moment to applaud Matt Damon? In a recent interview the actor offered an anecdote seemingly meant to signal not only the rapidly changing pace of political correctness, but also Damon’s admirable willingness to listen in and change with the times. Just months ago, he explained in the interview, after using the “f-slur for a homosexual” in a joke, his daughter “went to her room and wrote a very long, beautiful treatise on how that word is dangerous. I said, ‘I retire the f-slur!’ I understood.”

In a backlash that some will surely but ill-fittingly chalk up to cancel culture gone rampant, rather than a standing ovation to his supposed personal development, nearly everyone online shook their heads in dismay. Most were upset that it was up into this very year, presumably, that Damon was freely using the word without much thought to its harmful connotations. How could he be so oblivious, until only months ago, to its harm?

The answer is that he wasn't. Damon explained that this word “was commonly used when I was a kid, with a different application.” This time-worn excuse — that things were different back then — is disingenuous at best, dishonest at worst. Whatever the application from whatever decade, anyone — and surely the man who played Liberace’s lover nearly a decade ago — has a basic understanding of how violent that word is for the queer community. And nobody needs a reminder of how pervasive homophobia still is: simply Google DaBaby and his vile rant on stage at Rolling Loud just a week ago offers up enough receipts. The incident feels a bit par for the course for the actor, who has often said and reacted in boneheaded ways in order to be the smartest one in the room. Exhibit A:

But, considering that in the same interview Damon lamented about how quotes are taken out of context, let us assume he wasn’t suddenly taught about its true meaning or its danger. He simply meant the true gravity of the word finally dawned upon him. The real sad truth, then, is not that it took a treatise from his daughter to help him learn and for it to be “understood” — it’s that it took this much for him to care. It took this much for Damon to let go of this fetishized idea that those like him have the right to say things they want because they supposedly didn’t mean it the way you perceived it (and to be clear, the “different application” in Damon’s childhood days is absolutely informed by the original connotation as a pejorative, by the association of queerness with that which is deviant and less-than).

In fact, the creators of South Park, notorious for bashing anything resembling caring too much or being too sensitive (something they could be good at in the past but are no longer), once focused an entire episode in 2009 around the exact notion of how to use the f-slur — that it doesn’t mean something homophobic, but something you use, for instance, when you hear obnoxiously loud motorcycle bicyclists. The boys bring their case to city council, then get the official dictionary definition of the word changed so that they can keep using it. (Literally, this is the plot, and the episode is called “The F-Word.”)

This is kind of ludicrous mental gymnastics that is the actual nature of Damon’s willful ignorance — he always knew what it meant, he just chose to hold a hard line, while claiming excuses and obfuscations, but really just because it’s his right, damn it! The issue, of course, has never been about taking anyone’s rights away. These situations are simply about asking for a little awareness and a little empathy — literally one word’s worth of empathy — around the dark and violent realities for entire groups of people.

Rather predictably, it’s Damon’s daughter who broke through. It is now of a pattern for him, as it is with many men, to publicly consider his enlightenment only via the women in his family. The interview itself points to the hot water Damon landed in a few years back during the MeToo movement, when he said, “As the father of four daughters, this is the kind of sexual predation that keeps me up at night.” Sexual assault should be disconcerting regardless of fatherhood, many noted. The same applies here. It shouldn’t take a treatise from a daughter for one to recognize his own myopia. But alas, such is the nature of certain people. Or specifically, people like Damon.

Indeed, many seemed to wonder: why would Damon so casually and freely offer up a clearly self-sullying anecdote? More specifically, why do famous white people always willingly admit to things like this? The answer is in the question. Twitter is not the universe — the truth is that many will in fact take the anecdote to mean what Damon intended for it to mean: that he is honest, self-aware, and a good father who is open to growing and learning as the times change. Cancel-culture-whining aside, the thing will blow over — Damon’s new film Stillwater will likely be unfazed by this (if anything more people know about the film), and he’ll get his applause for learning a lesson he already knew.