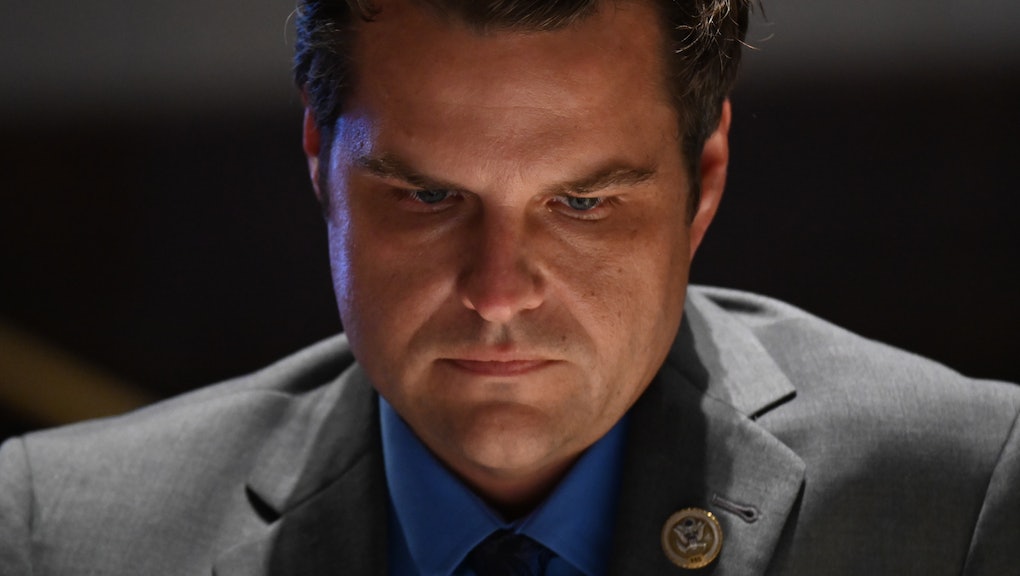 Matt Gaetz is having a very bad day

On Tuesday night, Florida Republican Rep. Matt Gaetz clearly hoped an appearance on Tucker Carlson's ostensibly friendly Fox News broadcast would help clear his name after a New York Times report linked him to an ongoing Justice Department investigation into underage sex trafficking. As it turned out, not only was Gaetz wildly overestimating his powers of persuasion, but over the course of a rambling, frantic interview with Carlson on Tuesday night, he managed to both dig himself into deeper potential legal jeopardy and alienate perhaps the single the most powerful conservative broadcaster on Earth.

As is often the case with explosive stories like this, a lot has happened in the past 24 hours. So let's make sure we're all on the same page here:

On Tuesday morning, Axios reported that Gaetz had begun telling confidants that he was mulling a switch from politics to broadcasting, the plan being to end his three-term congressional stretch of not passing a single bill with a potential move to the ultra-conservative Newsmax network. Considering Gaetz's career in Congress has been defined largely by preening self-promotion, rather than actual legislating, Axios's report made a certain degree of sense.

Then, just a few hours later, the seemingly benign — if wholly self-serving — narrative behind Gaetz's rumored career change was detonated, with a New York Times report that former Attorney General Bill Barr had opened an investigation into Gaetz as part of a larger case involving indicted sex trafficker Joel Greenberg during the final months of the Trump administration. Per the Times, Gaetz is being investigated "over whether he had a sexual relationship with a 17-year-old and paid for her to travel with him, according to three people briefed on the matter."

Gaetz quickly responded on Twitter, denying the allegations and offering his own (largely unverifiable) counterclaim that, actually, he is the victim of a criminal shakedown from a former DOJ official, who had attempted to blackmail him and his family for $25 million. He even outed his own father as an FBI informant.

Suffice it to say, Gaetz's counter-narrative only served to raise more questions than it answered. So that evening, the congressman appeared for what should have been an excessively friendly chat with Fox News's top conservative sycophant Tucker Carlson.

It was a disaster.

Rather than clearing the air, it took Gaetz less than 10 minutes to repeatedly raise previously unheard of details regarding his alleged criminal predilection for minors. He denied the existence of photographs of him with child prostitutes — something no one had raised until he mentioned it. He dredged up largely forgotten — and discredited — criminal sexual allegations against Carlson himself ("You just referred to a mentally ill viewer who accused me of a sex crime 20 years ago. And of course, it was not true. I never met the person," Carlson deadpanned in response). And, in a particularly bizarre moment, he attempted to rope Carlson into the current investigation against him, claiming that the two had actually met one of the FBI's sources years ago.

"You and I went to dinner about two years ago, your wife was there, and I brought a friend of mine, you’ll remember her," a manic-sounding Gaetz sputtered. "And she was actually threatened by the FBI, told that if she wouldn't cop to the fact that somehow I was involved in some pay-for-play scheme, that she could face trouble." Carlson said he couldn't remember the dinner, although near-contemporaneous footage of Gaetz describing the evening surfaced shortly after the interview aired.

To get a sense of just how bad the whole thing was, consider the post-script Carlson offered after the interview concluded: "If you just saw our Matt Gaetz interview," a shellshocked-sounding Carlson intoned, "that was one of the weirdest interviews I’ve ever conducted."

"I don't think that clarified much," he added. "But it certainly showed this is a deeply interesting story and we'll be following it."

Seriously, it was that much of a mess. Doesn't Gaetz have a lawyer telling him to, y'know, not run his mouth on national TV like this?

Early Wednesday morning, in the aftermath of Gaetz's disastrous appearance, the DOJ official accused by Gaetz of masterminding the alleged extortion scheme pushed back, saying, "This is a blatant attempt to distract from the fact that Gaetz is apparently about to indicted for sex trafficking girls."

Clearly there are a lot of missing pieces in this investigation, and it's unclear what, if anything, will actually come out of the DOJ's alleged look into Gaetz's potentially criminal personal life. For now, all we have to go on is the word of a career DOJ official and a trio of sources who spoke with one of the world's premier investigative news outlets, against Gaetz's rambling, question-raising excuses.