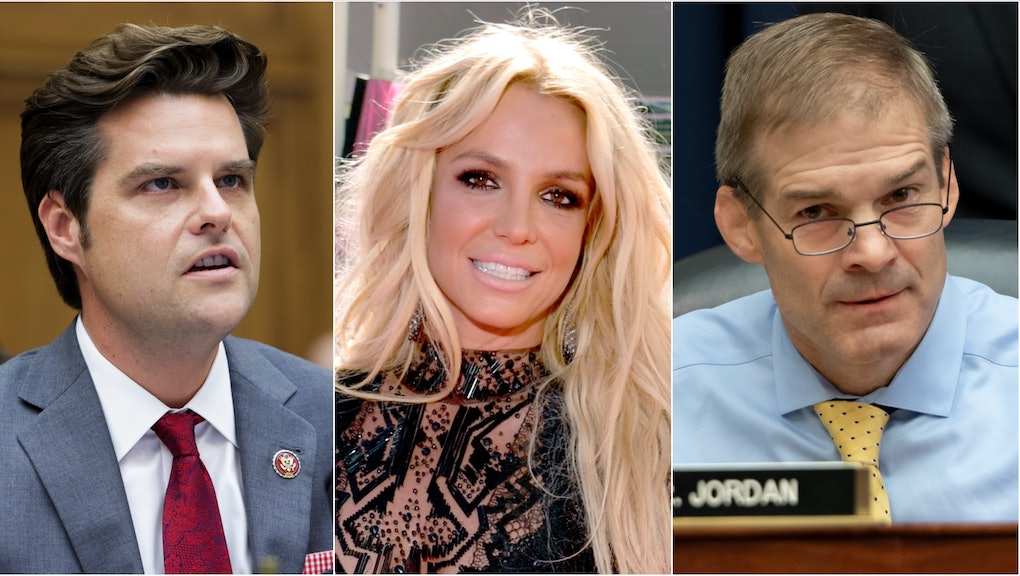 Listen, I’d like Britney Spears to be freed from her conservatorship as much as the next person. But I’m highly suspicious of the Republicans in Congress who’ve suddenly embraced #FreeBritney as their latest publicity stunt, I mean pet project.

That’s right, Reps. Matt Gaetz (R-Florida) and Jim Jordan (R-Ohio) watched Framing Britney Spears and were so enraged by the pop star’s plight that they’re lobbying the House Judiciary Committee for a hearing on guardianships and conservatorships. And, big surprise: Gaetz told TMZ he’d like to invite Spears to Washington, D.C. to testify in front of Congress.

“Look, Britney was the most powerful, popular pop star in the world, and this conservatorship process abused her, has it where she can’t vote, can’t get married, can’t work fairly. And if it could happen to Britney Spears it could happen to anyone,” a sunglassed Gaetz told the tabloid.

The politician said he was “really was triggered” by the documentary, adding: “If folks want to free Britney, they need to contact Chairman Jerry Nadler, and they need to tell him we need to hold this hearing, find out how people are abused in this process, and we need to hear from the Queen of Pop herself.” Honey... I hate to break it to you, but if Spears is going to talk to anyone, it’ll be Oprah Winfrey, not you jokers.

Gaetz is acting like he’s a crusader for justice and human rights, when his voting record suggests starkly otherwise. On March 3, the House passed the George Floyd Justice in Policing Act (addressing law enforcement accountability) as well as the For the People Act (expanding voting rights), and Gaetz voted no on both. Just yesterday, he called the proposed $1.9 billion pandemic stimulus package a “Trojan horse” for socialism.

Hmm. Nearly 32,000 Floridians have died from COVID-19 in the last year and 614,000 people were unemployed as of December 2020, but it’s great to know Gaetz has his priorities straight.