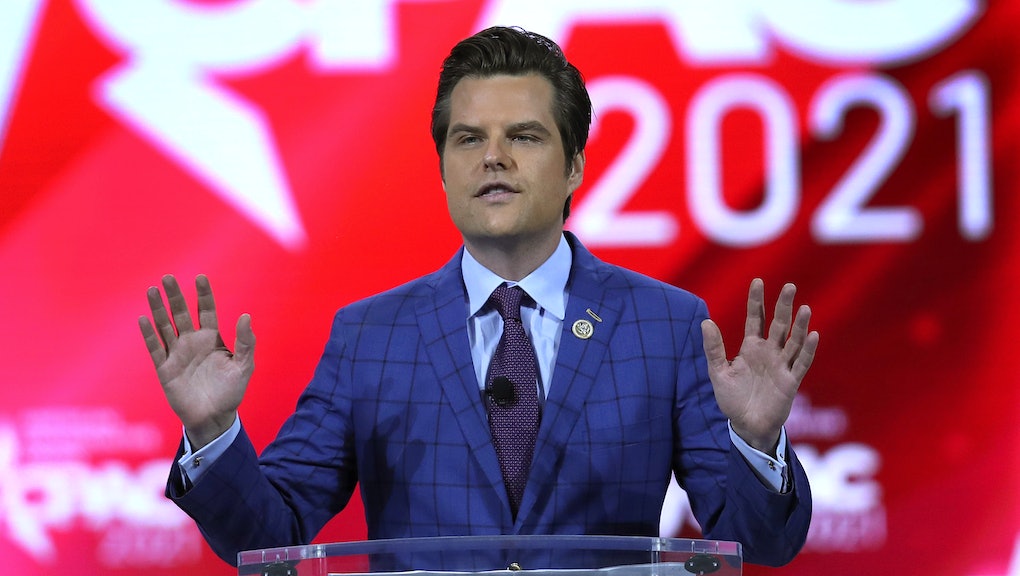 Former Florida state Rep. Tom Goodson, a Republican, told the Orlando Sentinel that Gaetz was "absolutely against" the proposed law, which made it a first-degree misdemeanor to publish a sexually explicit image of another person without their consent. "He thought the picture was his to do with what he wanted," Goodson told the paper. "He thought that any picture was his to use as he wanted to, as an expression of his rights."

The bill did eventually pass in 2015, with near-unanimous support — a 114-2 vote. The two no votes were Gaetz and John Tobia, who happened to be a former roommate of Gaetz's. But even just getting the bill up for vote was incredibly difficult because Gaetz kept doing everything in his power to block it. The proposed law started floating around in 2013 and eventually got to the Florida Senate a year later, where it cleared two committee votes without a single objection. But the version of the bill in the Florida House got shelved by the first committee that was supposed to debate it. That committee was chaired by — wait for it — Matt Gaetz.

Goodson told the Orlando Sentinel that he and another state legislator, Sandy D’Alemberte, attempted to sit down with Gaetz to discuss why he was so opposed to the bill. According to the former lawmaker, Gaetz believed that if someone sends a photo, it becomes the property of the recipient, who can then do whatever they want with it — including sharing it or posting it online without permission.

Maybe, if you were being incredibly generous, you could chalk up Gaetz's bizarre crusade to some weird and incredibly misguided interpretation of property rights. However, in the context of Gaetz's latest scandal, it seems clear that it was a move of self-preservation. Gaetz now stands accused of having an improper sexual relationship with an underage girl (which he denies), and he reportedly has a habit of showing off nude photos of women he's slept with to his colleagues in Congress. He also just so happened to be the only member in the House of Representatives to vote against an anti-human trafficking bill in 2017. Hey, what do you think that was about?