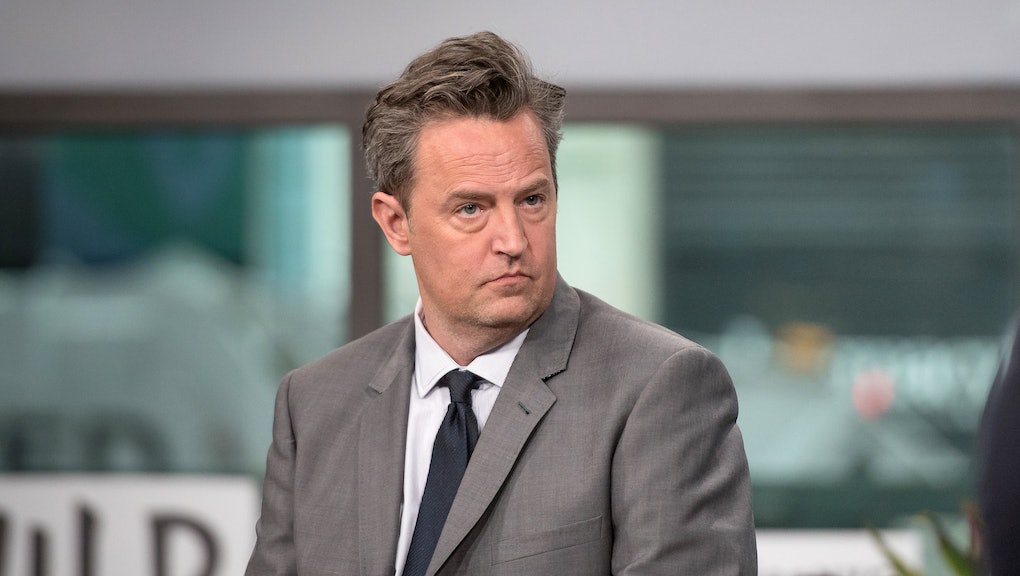 The first time I realized vaccine merch was a "thing" was in early March, when I spotted a lady wearing a t-shirt that read something like, "Vaxxed and proud!" Suuure there's utility in turning yourself into a walking billboard, letting everyone know you're mostly-safe to be around. And I guesssss vax-tees and those little "fully vaccinated" stickers being rolled out on dating apps apply positive peer pressure on others to get the jab. But still, I think it's cringey to turn your vaccination status into a fashion statement.

However, that's not why certain people criticized Friends star Matthew Perry for selling t-shirts emblazoned with, "Could I be any more vaccinated?" — a play on one of his famous quips from the show. (His character, Chandler Bing, is lovably cringey as a motif, so it tracks.) Instead, when Perry announced his Chandler-inspired line of apparel and accessories, timed to the release of the Friends reunion special on May 27, people called him greedy.

The six stars of Friends — Perry, Jennifer Aniston, Courteney Cox, Lisa Kudrow, Matt LeBlanc and David Schwimmer — each got at least $2.5 million for participating in the reunion. Proceeds from Perry's merchandise don't seem earmarked for any sort of charity, focused on Covid-19 relief or otherwise. By contrast, The Late Show with Stephen Colbert has been selling pandemic-themed merchandise with 100% of the proceeds going to small businesses impacted by the Covid-19 crisis.

So, yeah, some people took issue with the fact that Perry was presumably pocketing whatever he earns from his line of Chandler-parel. And anti-vaxxers came for what they took as scientific propaganda in his Instagram comments. But honestly, if Perry's dumb shirts convince someone vaccine-hesitant (but Friends-obsessed) to get the shot, I don't care if he pockets $26.99 per tee. There are bigger things to get fired up about, like how not enough has changed in America a year after the murder of George Floyd. Let's direct public fury in that direction.

More like this
Ellie Kemper apologizes for attending “racist, sexist, elitist” Veiled Prophet Ball
By Tim Brinkhof
Katt Williams to all comedians: If cancel culture gets to you, you weren't funny anyway
By Tim Brinkhof
The 'Gossip Girl' reboot really wants you to take it very seriously
By Carrie Wittmer
Stay up to date