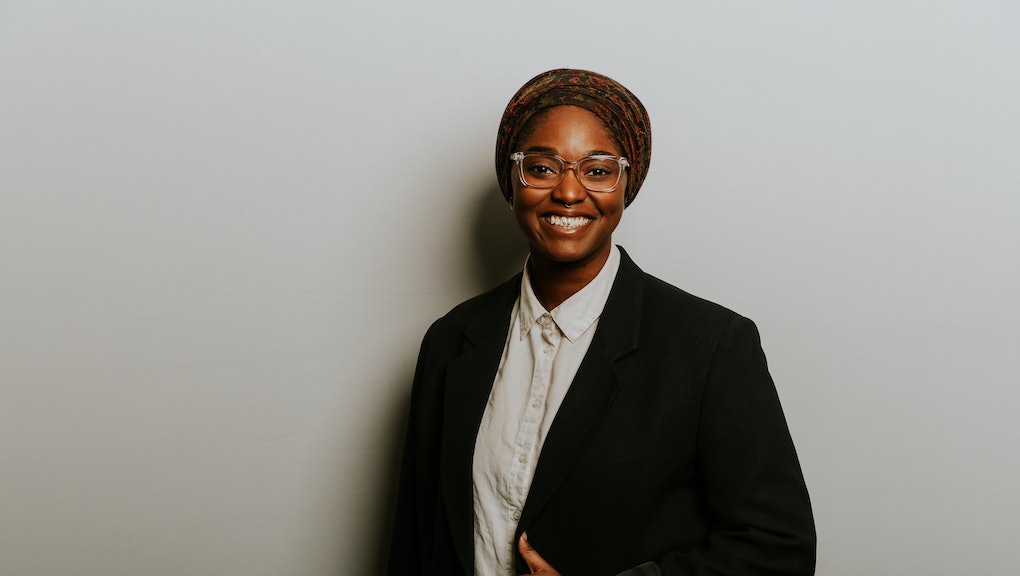 Mauree Turner, the first nonbinary and first Muslim legislator in Oklahoma, is all about community

Growing up in Ardmore, Oklahoma, Mauree Turner set their sights on becoming a veterinarian. But things took a turn, and instead, last week they were elected to the Oklahoma House of Representatives as the first Muslim and first nonbinary person ever to serve in that body.

Before running for office, Turner was a community organizer who encouraged others to run to increase the diversity of Oklahoma’s representatives. “We should have representation that looks like our district,” Turner tells Mic. “It’s a lot easier to carve people out when you don’t have to experience the things that they experience every day.”

It took 20 to 25 conversations, at coffee shops and through Instagram messages, to convince Turner to run themself to be that representation. “One thing that community organizing is definitely about is answering a call to action by your community,” Turner says, “and the folks of House District 88 were asking me to run.” They took the advice they had been giving others and decided to take the plunge last year, at the age of 26.

In a progressive district in Oklahoma City that is about 44% people of color, Turner eked out a win in their primary race in June against white Democratic incumbent Jason Dunnington by 248 votes. They then easily won the general election last week against a Republican challenger, earning 71.4% of the vote.

Though their identity as a Muslim has drawn national attention, Turner was raised as a Baptist singing in a church choir. Turner’s father converted to Islam while he was incarcerated; he was in and out of jail until Turner was a preteen. Around that time, Turner’s mom encouraged her children to choose their own religious paths, and Islam resonated with Turner. Their 11 siblings are Muslim, Baptist, and nondemoninational.

Turner’s mom worked three jobs to support her children: for the state during the day, at a warehouse overnight, and at a beauty supply store on weekends. Their family had to choose between basic essentials each month, and doctor’s visits weren’t something they could count on affording. Turner remembers being brought along on their mom’s work trips to conferences on topics like HIV/AIDS and LGBTQ+ issues as an elementary school child. “My mom is one of the first community organizers that I ever came into contact with,” Turner shares, adding that their activism is a way they honor their mother.

Their work on criminal justice reform, a prominent part of their platform, is motivated by their father’s experience with incarceration. As a child, going to a prison to visit their father was a part of normal life for Turner, giving them a look inside a system they believe needs to be completely reimagined. “The way we weaponize our justice system is really tragic and does a lot of damage to kids, to individuals, to family units, to communities,” Turner says. “When I was able to sit down and talk with [my dad] and reprocess what the justice system does to our people, to Oklahomans, that was when I realized that was the fight, that was the hill I was willing to die on,” they continued. “I don’t want other kids to go through what I went through.”

Turner knows that criminal justice is an intersectional issue connected to drugs, race, mental health, education, wages, immigration, and more. “The one conversation we used to continually have was about how much money [reform] would save taxpayers. We’ve seen that narrative really shift in these past five to 10 years to expand to what that really looks like,” Turner says. “We talk about the school-to-prison pipeline, we talk about jury sentencing and bail reform and re-entry programs.”

Turner also notes that their experience as a child with an incarcerated parent is far from rare in Oklahoma. The United States has the highest incarceration rate of any country in the world, and Oklahoma the highest in the U.S. Turner is deeply disappointed that voters rejected a ballot measure last week that would have helped to bring down sentence lengths for non-violent felonies, and they dream of a justice system dedicated to rehabilitation instead of “revenge.” But even with a Republican-held state government, Turner is hopeful they can make change: “I wouldn’t be here if I didn’t think I could do it, and I certainly wouldn’t be here if my community didn’t think I could do it.”

When Turner takes the oath of office Wednesday, they will become the highest-ranking nonbinary public official in the United States. While there is a small handful of nonbinary local officials on sitting on bodies like city councils and school boards across the country, none has ever held office in a state legislature before. Turner’s victory is part of 2020’s “rainbow wave”: More LGBTQ+ candidates were elected on Nov. 3 than on any other day in American history.

More American Muslims ran for office in 2020 than in any previous year, too. Turner’s win makes Oklahoma one of seven states that elected its first Muslim state legislator last week.

When they start work in January on their 28th birthday, Turner will be in the same building they’ve spent time in as an advocate before, but now with the power to cast a vote. Turner says that they and their mom don’t show much emotion — but Turner is pretty sure they saw their mom tearing up as she started her drive back home the morning after Election Day.

More like this
The EACH Act would overturn a "blatantly racist" abortion rule. Will it pass?
By Clare Busch
The real reasons employees aren't rushing back to work
By Noah Berlatsky
How tax prep companies conspired to make filing your taxes so damn hard
By Pat Garofalo
Stay up to date