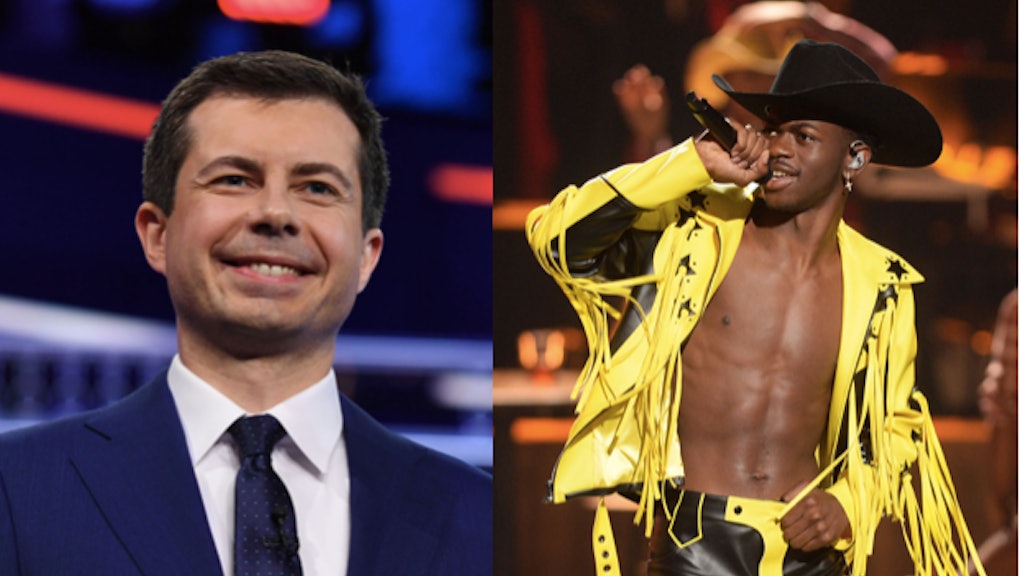 Mayor Pete Buttigieg, the first presidential candidate to run as an openly gay man, has issued some words of support for Lil Nas X, the chart topping, genre-bending musician who recently came out as LGBTQ+. Days after the "Old Town Road" rapper's announcement on June 30, aka World Pride Day, Buttigieg posted a sweet message on Twitter celebrating the news.

"As a fan, I’m thrilled and inspired to see him standing in his truth as a member of the LGBTQ community," Buttigieg wrote on Twitter. "Welcome to the family!"

While Lil Nas X didn't explicitly name his sexual orientation in his coming out posts, he did tweet a snippet of his song "c7osure," from his debut EP 7, and implied that the tune made his identity clear. "Some of y’all already know, some of y’all don’t care, some of y’all not gone fwm no more," the musician wrote, "but before this month ends i want y’all to listen closely to c7osure." He added a rainbow emoji to the end of the tweet.

In a later post, the 20-year-old showed the artwork for his upcoming album, which features rainbow lights in a skyline and wrote, "Deadass thought i made it obvious." According to TMZ, Lil Nas X had reportedly reached out to the artist who designed the 7 cover art and asked him to add more color to the towers for his announcement.

Though the rapper said that he expected to lose followers over his announcement, his reveal was widely celebrated by many fans, including Buttigieg.

The candidate's support is particularly meaningful, as both Buttigieg and his husband Chasten have frequently discussed their marriage and the historic nature of the politician's run to the press. "I'm really happy to carry the torch and bravely and proudly carry the banner for our community and for everyone," Chasten told NowThis in April. "This campaign is love and you are loved and you matter. And we're gonna go out there and make you proud."

Also in April, Chasten tweeted out a statement of support for members of the LGBTQ+ community, specifically about the difficulties of coming out.

Coming out can be a challenging ordeal for many people, and as Lil Nas X indicated with his tweet, even someone as famous as him — he's currently entering the 13th week at the top of the Billboard Hot 100 charts for "Old Town Road," the song that launched him into stardom — is unfortunately not immune from discrimination.

Yet any homophobic hate that he has received so far, the musician has responded to with expert level trolling and jokes. When one person wrote on Instagram, "Can you not be gay," Lil Nas X replied with, "I'll try."

"How long are you going to be gay for?" someone else asked. "Only on the weekends bro," the star perfectly answered.

Lil Nas X's prediction that he would lose supporters by coming out may sadly be true, but any loss of fans hasn't dampened the star's success; "Old Town Road" went diamond on July 3, three days after his announcement.

A young musician with the world's number one song, a loyal fanbase that includes one of the 2020 Democratic candidates, and a sense of humor to respond to those who criticize his identity? To quote his own lyrics, truly nobody can tell Lil Nas X nothing.

More like this
Caitlyn Jenner's campaign is off to a great start!
By Rafi Schwartz
Title IX will once again protect against gender identity discrimination
By Rafi Schwartz
Watch GOP Gov. Jim Justice fully combust when asked why he signed a transphobic bill
By Rafi Schwartz
Stay up to date