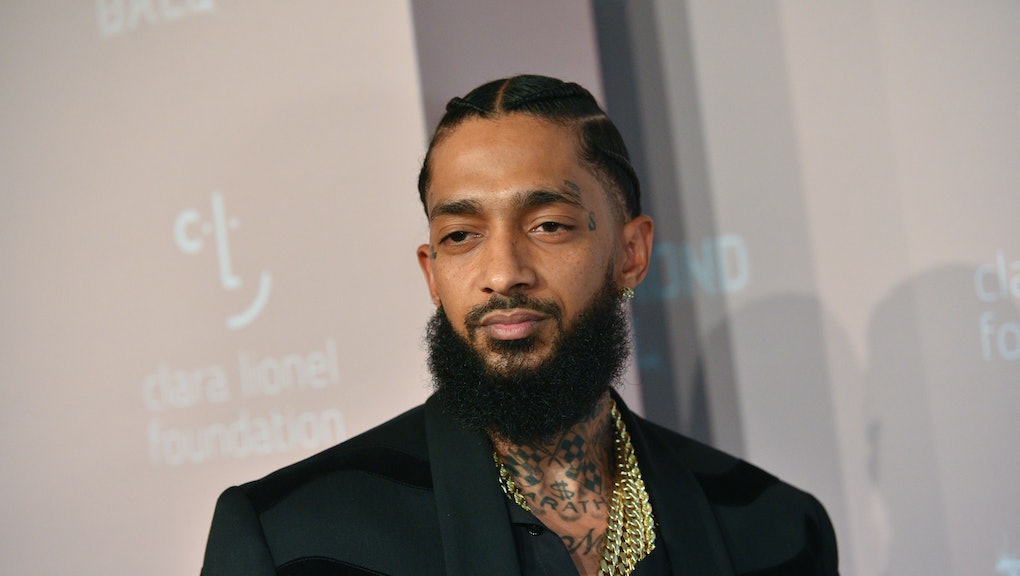 In March, rapper Nipsey Hussle — born Ermias Asghedom — was shot and killed outside of his own clothing store. A loss that shocked his community in Los Angeles, as well as his collaborators, friends, and fans around the world. Nipsey Hussle would have turned 34-years-old today.

Before his death, Nipsey's work as an activist and rapper seemed like it was about to reach new heights. His clothing store was the first of several business ventures he undertook in order to reinvigorate his community Los Angeles. He attended the Grammys just months before he passed, earning a Best Rap Album nomination for his album Victory Lap.

At Marathon Clothing, the store Nipsey Hussle owned on Crenshaw and Slawson, mourners began to gather on Thursday to pay their respects. According to the Los Angeles Times, there was not an official event planned at the store for Nipsey’s birthday, but people came anyways. Recently, a fence was erected around the property ahead of further construction plans, preventing people from getting too close to the store, though there are large murals nearby where people are still able to gather,

“Everybody knows it’s his birthday and they will be here,” Steve Barbee of L.A. Hood Life Tours told the Times. “Everybody, within themselves, will make it an event.”

According to TMZ, Nipsey’s family, including Lauren London and the couple’s children, will be spending his birthday in private. In Los Angeles, there were plenty of calls for a public event in honor of Nipsey’s birthday, but a source close to the family said that they are still in mourning and aren’t ready to publicly celebrate the rapper’s birthday.

On Instagram, London posted photos of Nipsey, and wrote a poetic tribute.

Nipsey was remembered by friends and celebrities who knew and loved him. Meek Mill, Thundercat, and Ava DuVernay all posted to social media in honor of his birthday.

"For Nipsey. Ermias. Son. Brother. Partner. Friend. Artist. Champion. Grateful that he existed. Grateful we walked this vast earth at the same time. In the same city. Grateful that our paths crossed. Grateful for the work and wisdom he gave us. We miss you," DuVernay wrote.

Meek Mill posted a portrait of Nipsey done by the artist Andrew Chavers Jr., with the caption "Prolific" underneath.

Nipsey Hussle was shot to death in broad daylight outside of Marathon Clothing, and two others were shot and injured. A man named Eric Holder, 29, was arrested and ultimately charged with one count of murder and two counts of attempted murder.

“I hope that individuals will respect Nipsey Hussle’s family’s wishes to mourn privately during this time,” said Harris-Dawson. “Grief is difficult and takes many forms. The best way for us to honor Nipsey’s legacy and what he stood for is to cherish and preserve our community.”