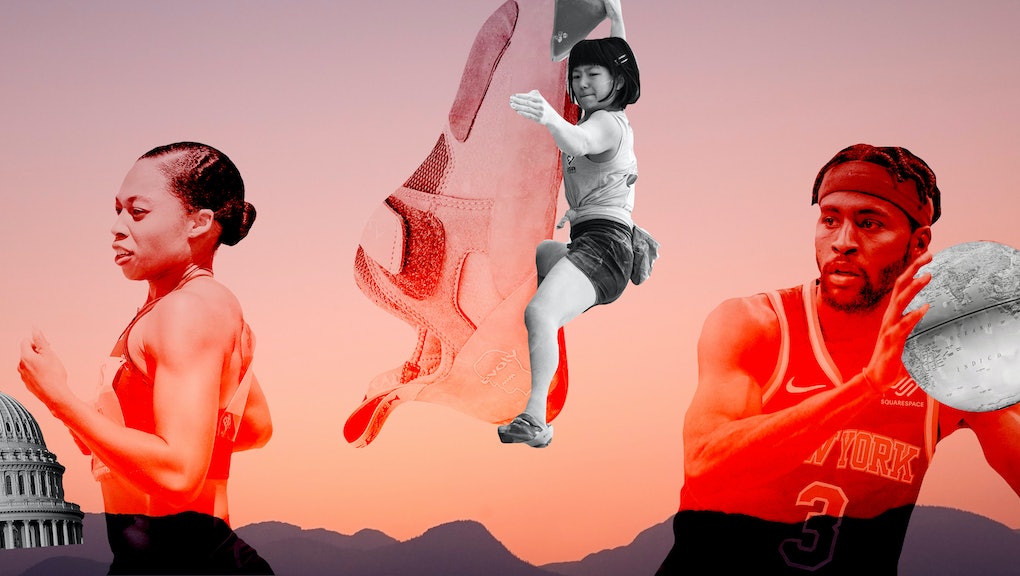 Last year, Allyson Felix, a nine-time Olympic track and field medalist, made headlines when she wrote a New York Times op-ed about how her then-sponsor Nike refused to provide her or other female track athletes with the maternity protections they requested, and financially penalized them for their pregnancies. As self-assured as Felix seemed in her op-ed, she struggled with the decision to share her experience. In general, speaking up “can feel really scary because a lot of people look to athletes to stay in their lanes,” and talk only about sports, she tells Mic.

But the outpouring of support from women across industries was affirming. “They sent me so many messages that they’d been in similar situations,” she recalls. “That helped me understand that I’m doing what I should be and that there’s more work to be done.” Her Times op-ed also appears to have contributed to the scrutiny toward Nike and helped catalyze actual change across the industry. Since its publication, Nike updated its maternity policy for sponsored athletes, and Felix signed a sponsorship contract with Athleta, which includes pregnancy protections and doesn’t require her to win a minimum number of races to receive financial compensation.

Felix is among the many athletes challenging the widely-held belief that they should just “shut up and play” and instead, engaging in activism around the causes important to them. In many cases, the global uprisings in response to the deaths of Breonna Taylor, George Floyd, and other Black Americans at the hands of police have emboldened them to use their platforms to fight systemic racism and white supremacy in very public ways, in hopes of inspiring others to act.

Besides working with Athleta to shift how brands approach partnerships with female athletes, Felix is also committed to drawing attention to the maternal mortality crisis for women of color. Indeed, the risk of pregnancy-related death is two to three times higher for Black and Indigenous women, according to the Centers for Disease Control and Prevention.

Felix opened up about own pregnancy scare before Congress last year. At 32 weeks, she was diagnosed with severe preeclampsia — a condition that can be fatal to both mother and child — and underwent an emergency C-section. “I learned that my story was not so uncommon,” she told the House Ways and Means Committee.

“There were others like me — just like me. Black like me, healthy like me, doing their best — just like me. They faced death like me, too.” She hopes she’s empowered them with knowledge that could’ve helped her during her pregnancy: their risk, symptoms to look for, and how to advocate for themselves.

Felix has also joined protests against police brutality, an issue that hits close to home, having grown up in the heart of Los Angeles and lived through the riots there in 1992. As part of her sponsorship, Athleta actually encourages her to fight for equity, but it’s also personally important to her that people see her — someone who looks like them, someone they trust — standing up for what she believes is right. “When you have that attention, to me, there’s almost a sense of responsibility to do something with it, and to do something good.”

Rock climber Ashima Shiraishi initially struggled with voicing her beliefs, too, partly because doing so conflicted with her parents’ values. “My parents are both Japanese, and obedience and conformity is so important in Japanese culture,” she explains, adding that speaking up, especially if you’re young, is frowned upon. Her parents have been extremely supportive of her climbing — her vocal support of racial justice, not so much. Shiraishi’s shy, introverted nature also made expressing her opinion “a little bit daunting.”

But these challenges paled in comparison to what was at stake in the ongoing fights for racial justice. Ultimately, using her voice “wasn’t a hard decision,” Shiraishi tells Mic. “It’s so important right now to be vocal and do whatever you can.”

Recently, Shiraishi has used her platform to advocate for a more inclusive, welcoming climbing community, which has historically been predominantly white and male, and accessible mainly to those who can afford to buy gear and lead a somewhat nomadic lifestyle. Due to the financial struggles her family faced while she was growing up, she doubts she’d be climbing today if not for her relatively easy access to the boulders in Central Park, the free membership she received from her local climbing gym, or the welcoming climbing community she discovered.

Besides providing a sense of community, climbing is meditative, great for you physically, and pushes your boundaries of what you believe to be possible, Shiraishi says. “There are so many benefits and joys we reap from climbing, and it shouldn’t be reserved just for those who can afford it.” The exclusivity and homogeneity of climbing spaces can also deny these benefits to marginalized people by making them feel like outcasts, discouraging them from continuing.

To help extend the benefits of climbing to everyone, Shiraishi collaborated with climbing shoe brand Evolv and creative collective Brain Dead to design a shoe whose profits from a flash sale earlier this summer went to organizations that make climbing accessible to marginalized communities. Shiraishi is also working with Brain Dead on a program that would allow kids from marginalized communities in Long Beach, California to have free access to a climbing gym, as well as provide them with gear and other support.

On Instagram, Shiraishi has urged her hundreds of thousands of followers to speak out against institutionalized racism. “I feel like for me, climbing is kind of a selfish pursuit,” she says. Even though she, or the sport itself, might inspire others, climbing doesn’t directly help society — but using her platform to shed light on systemic racism can. “I want to continue to support fighting racism,” she says. “If there is something that is hurting other people, we have to stand up to it.”

New York Knicks small forward Moe Harkless is using his platform to connect people to resources that support the Black community. Amid more widespread demands for racial justice, “I’ve had so many people say to me they wanted to help, but they don’t know how,” he tells Mic. Oftentimes, though, he was unsure how to respond. “I was thinking about it and with the help of a few people, we came up with the idea. It started with me posting on my story on Instagram and we wanted it to have a place to live, so we turned it into a website.”

Harkless explains that his website, Black Lives Now, is for people who want to support the Black community but don’t know where to start. Rather than wading through Google results, they can click on his curated links to outside resources. One link takes visitors to a list of hotlines and therapists for Black Americans who are struggling right now. Others open Google sheets that list Black-owned restaurants to support in New York City and LA. Another link goes to recommended anti-racist books, and another to a playlist featuring Black artists, created by Harkless himself.

So far, the feedback has been positive. People have told him they’ve bought anti-racism books and ordered from Black-owned restaurants using the resources on his site. “At the end of the day, the most important thing for me for stuff like this is to give back and help other people,” he says. “If you have a platform, it should be about helping others and bringing people along with you.”

When people expect athletes to remain silent while they bear witness to oppression, they're dismissing the fact that they’re also multifaceted humans with opinions and voices. “I’m not supposed to be categorized as only an athlete,” Shiraishi says. “At the end of the day, I am a citizen of this country, and my voice matters the same as anyone else’s.” Felix agrees. “We are members of the community,” she says, and adds that discouraging athletes from engaging in activism is a missed opportunity. It’s important hear from them, “especially when they do have a platform, because I feel they can effect change in a very real way.”

More like this
How to deal with racial microaggressions from your partner's family
By Melissa Pandika
How to not be a jerk as restaurants reopen, according to servers
By Tracey Anne Duncan
What is an e-bike and should I get one?
By Caroline Shannon-Karasik
Stay up to date