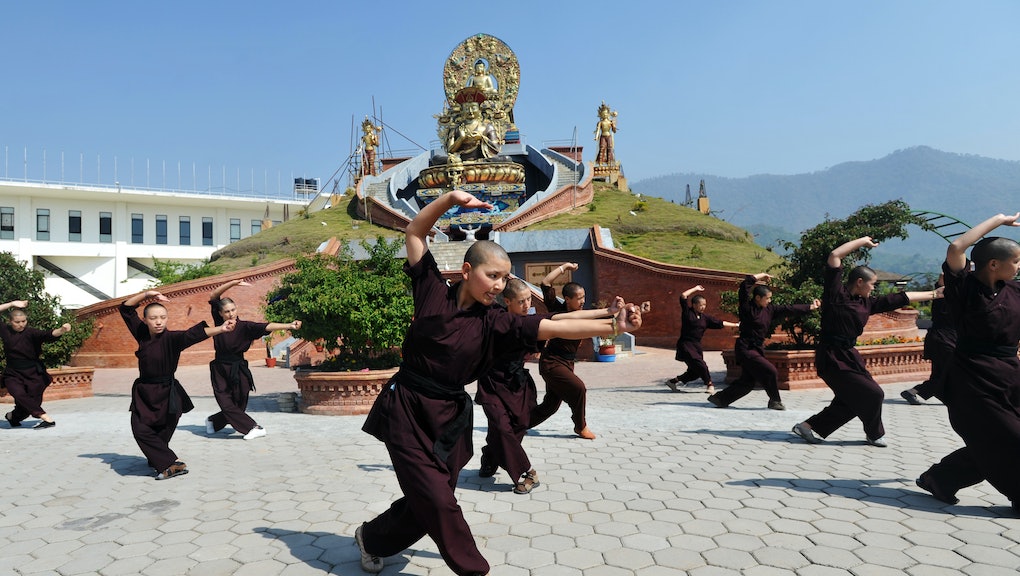 In Nepal, nuns are practicing kung fu in order to achieve better physical and mental health, as well as to strengthen their community. In 2008, the spiritual leader of the Drukpa lineage of Himalayan Buddhism, His Holiness Gyalwang Drukpa, hired a kung fu coach to teach the nuns from Druk Amitabha Mountain Nunnery self defense and to boost their confidence, CNN reported. The nuns wake up, meditate, and then train for three hours. Kamu, a nun in the lineage told CNN, “The Drukpa Order is not for lazy people." No kidding.

Buddhist nuns are celibate women who meditate all day, and it's easy to assume that this combination of femininity and spirituality equates to passivity, but these nuns are fiercely redefining what it means to be peaceful by making it their priority to empower, protect, and heal members of their community.

When a disastrous earthquake hit Nepal in 2015, the kung fu nuns acted as first responders, conducting helicopter rescues, distributing medicine, and helping clean up debris. The nuns attribute their resilience, in part, to their kung fu training. "When the earthquake hit, our kung fu training helped us to be brave and strong," Kamu told CNN. Being peaceful, then, can also mean being able to protect. These nuns are training their minds to be peaceful at the same time as they train their bodies to be strong enough to care for others.

Buddhist nuns were, for many centuries, seen as inferior to monks. They cleaned up after their male counterparts and accepted lesser spiritual status. In the early 2000s, His Holiness Gyalwang Drukpa, changed his approach to training the nuns in his lineage to buck that brand of oppression. Some folks were dubious. "I have been breaking through all these barriers," he told Susan Sarandon in a 2014 interview. "Whatever the Buddhist people say, I don't mind and I don't care."

The martial arts monastic approach seems to be having a powerful impact across the board. "Kung fu has trained me to be confident, strong and happy. The teachings help me put my compassion into action," Kamu said to CNN.

The confidence and strength of the kung fu nuns isn’t just good in an emergency. They have become pioneering environmentalists. Each year, the Drukpa nuns hike over 400 miles picking up litter and teaching people how to protect the environment. They also bike almost 2,500 miles through Nepal and Tibet raising awareness about human trafficking.

Kamu's testimonial reinforces the benefits of martial arts on the mind and the body. And while Buddhist nuns doing kung fu might feel counterintuitive at first, they're using their physical strength, spiritual dedication, and social activism to reduce suffering — which is exactly what the tenets of Buddhism suggest should be a primary goal. Perhaps everyone else just needs to think past prayer beads and meditation to get what peace really entails.