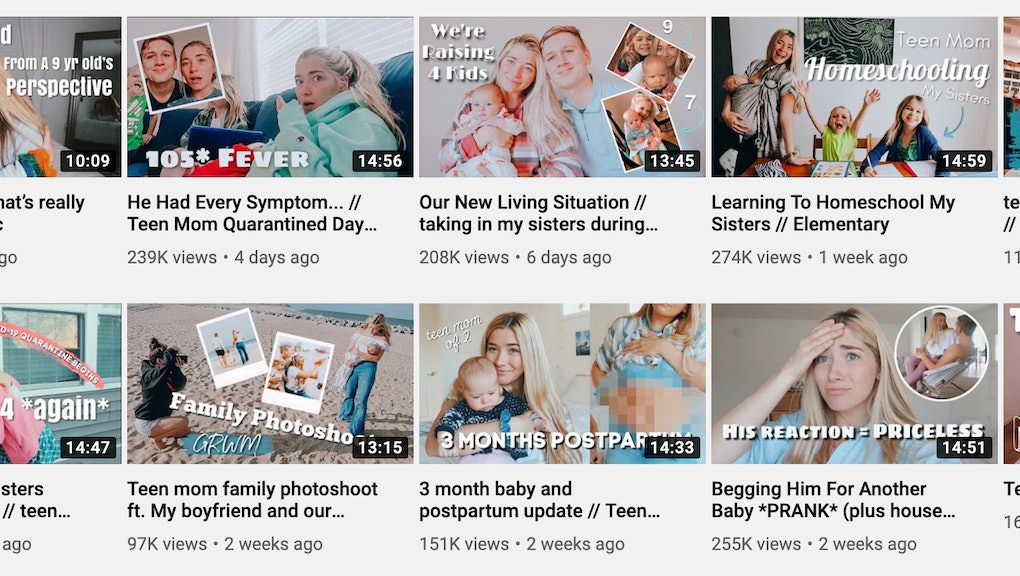 On December 7, at 9:31 a.m., 18-year-old Yasmyn Switzer gave birth to her second child, Analia Rae Lynn Dominick, a cherub-faced baby girl weighing in at seven pounds eight ounces and measuring 21 inches long. By 11 p.m. the next day, Switzer had edited and uploaded the first hours of labor—putting on a face mask, praying through contractions, jostling her boyfriend awake to go to the hospital — to her YouTube channel.

“I don’t know why I’m crying,” she says in the video, looking at her tear-stained reflection in the camera monitor.

The next week, Switzer uploads her natural birth video, newborn homecoming video, official name reveal and a “day in the life with a newborn and toddler” vlog, amassing upwards of 3 million views. The ever-circling debates around the length and quality of paid parental leave were never a consideration for Switzer or her boyfriend, 18-year-old Logan Dominick. Those first few days of motherhood are prime content for women who make their living as “mommy vloggers”, which is what Switzer is — kind of.

Teen moms on YouTube are a small subset of creators who exist as a strange, glossy amalgamation of a few of the Internet’s favorite things — beautiful teenage girls documenting their young lives, mothers sharing maternal milestones and the voyeuristic pleasure of treating unconventional lifestyles as spectacle. Teen mom YouTubers achieve the VSCO filtered holy trinity.

Switzer, in a phone call, has a more gracious view of the young women and girls who make up the majority of her viewing demographic. Her theory is that the popularity of teen moms on YouTube is down to the enormous fear around teen pregnancy in young people, something that’s fueled by a lack of access to positive stories.

“It’s just kind of inspiring to them,” she says. “They see someone who pulled it off.”

Switzer grants that her experience of teen motherhood is unique. She moved from D.C. to the sleepy beach town of Lewes, Delaware midway through high school, moving in with her aunt and uncle after her mother’s battle with substance abuse reached a breaking point. She discovered that she was pregnant at the beginning of her junior year, the product of a dysfunctional summer fling with a boy who later confessed that he had intentionally impregnated her to prolong the relationship.

Switzer was raised around young motherhood—both her mother and aunt had their first children as teenagers—but it was never something she expected for herself.

A few months in, she ended the relationship and began taking online classes to avoid going to school visibly pregnant. The following June, she gave birth to her daughter, Laela Juliana, and the next month she posted the first video to her YouTube channel: “Pregnant at 16 || single teen mom story time”.

Switzer, who had a few thousand followers on Instagram from her years moving around, filmed the video to share the news with old friends who might not have known about her pregnancy.

“It blew up pretty quickly,” Switzer says. “I remember going [back] to school with confidence because my channel was doing well.”

The video, which features Switzer sitting on her bed and retelling the events of her pregnancy in one long, confessional exhale, now clocks in at 2.6 million views. Like many a viral social media moment nowadays, the success was by semi-organic design—not expected, but certainly not unwanted.

By new creator standards, the growth of Switzer’s channel has been unusually fast. After posting for six months, Switzer passed the 250,000 subscriber mark, and one year later that count has tripled to 765,000. Since graduating from high school, YouTube has become a full-time job, and Switzer has stated in videos that she is able to support her children and two younger siblings solely through the monetization of her channel. Her second teenage pregnancy was planned with this income stream in mind.

These videos have allowed Switzer to connect with other teen moms, young women she never would have met outside of social media. But most of her city-sized following have never been pregnant or experienced motherhood. The fact is that there are fewer teen moms than ever—teen birth rates in the U.S. have hit record lows nearly every year since the mid-1990s. This is true across race and ethnicity, although black and hispanic teens continue to experience birth at disproportionately high rates.

The media’s hyperfixation with teenagers raising babies isn’t exactly new. In 2009, MTV began airing episodes of 16 & Pregnant, beginning something of a second wave of reality television alongside shows like Jersey Shore and The Hills. It was late noughties chaos in all its glory, featuring a rotating cast of pregnant teenage girls with side-swept bangs and Wrangler jeans.

The goal of the series, according to MTV, was to show the stark reality of unplanned teenage pregnancy. The teenagers were filmed as they had explosive arguments with their parents, heartbreak with the fathers of their unborn children and generally tried to keep their heads above water—all for a flat rate of $5,000, according to original cast member Amber Portwood.

What began as a six-part docuseries sprawled into a television juggernaut. The show continued to follow the cast members after they gave birth, leading to five spin-off shows under the Teen Mom franchise. The teenagers aged into women in their late twenties as the subjects of Teen Mom OG, now hardened by years of tabloid predation and a seemingly endless stream of scandals.

Critics couldn’t quite decide if the problem with Teen Mom was its glamorization of teen pregnancy—some cast members reportedly earned six figure salaries in later seasons—or its demonization of the young mothers, many of whom lived in precarious circumstances with little outside support. What did it say about a society willing to commoditize unplanned teen parenthood and consume these 40-minute splices of vulnerable life for entertainment?

Ten years later, the same questions are being asked of teen moms on YouTube. The difference is that these young women are not at the mercy of a television network and have full control over how their stories are packaged for the world. This means that moments of real crisis are hardly ever on display. Instead, videos feature montages of teen moms cuddling with their children, frolicking on the beach and getting ready for their baby showers. When the struggles of unexpected parenthood are shared, it’s usually with the benefit of hindsight, as teens recall the fear of telling their parents or the strain that pregnancy put on their relationships in “story times”.

It’s easy to worry that a young girl might watch a YouTuber like Yasmyn Switzer, who now lives in a five-bedroom house with her young family, and romanticize a prospective future of teen pregnancy. The footage of her life is a far cry from the narratives shown on Teen Mom, which research suggests directly led to a 4.3% reduction in teen births.

It’s something Switzer thinks about from time to time. In January of last year, she posted a video addressing the wave of comments she had received from girls with “baby fever”, some too young to have reached childbearing age.

“Sometimes I can’t take a shower until I’ve put Laela to bed, sometimes I can’t do my homework until I deal with my baby,” she says in the video. “Obviously I’m not trying to glorify teen pregnancy or make it seem like it’s easier than it is. I hope that’s not the message that you guys get.”

In conversation, Switzer isn’t sure if she feels 18. With her circumstances, she’s not sure what an 18-year-old is supposed to feel like. “I’m still a teenager, I still like to do things that teenagers do,” she says. “But I am a mom so it’s kind of hard to relate.”

This sentiment of quasi-adolescence is familiar to anyone who has watched an episode of Teen Mom or has a personal connection to teen pregnancy. But the instinct to pull out a video camera and document the experience—potentially for profit—may be distinctly Gen Z. Switzer was inspired by other young moms on YouTube, but she also looked up to virtual starlets like Hannah Meloche and Ava Jules, teenage girls who filmed videos about prom and clothes and high school boys. Even if she had not had a child at 16, influencing was always the dream.

“I think regardless of how my life turned out, this is something that I would have done anyways,” she says. “It’s just awesome that it’s worked out so well for me.”