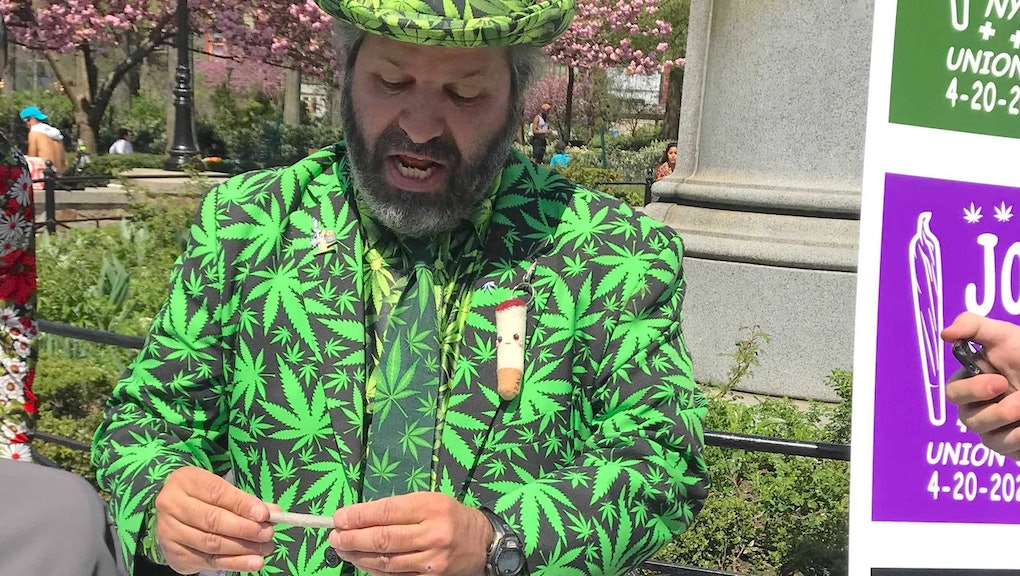 It’s my well-researched hypothesis that some of the smartest people in the world are also stoners. On this sunny, warm 4/20 in NYC’s Union Square, I got a little more proof. Tweets about two dudes handing out joints to people with completed vaccination cards immediately sparked my interest. I darted over to the park, wondering who these venerable, science-revering Stoner Santas were.

I made my way through the crowd to meet Nikolas Schiller and Todd Hinden, the latter of who I dubbed the Marijuana Mayor (“I’d love to be mayor of New York actually,” he told me) because of his brazen sartorial tribute to ganja. Truly, who wouldn’t consider voting for a candidate in a three-piece suit with a fat blunt broach?

Hinden is a very dope cannabis activist, I learn, who volunteers his time to check vaxx cards in exchange for what I’d call some pretty healthy joints , which is great, because there’s nothing more demoralizing than a supermodel-shaped doobie.

Schiller is the co-founder or DCMJ, a Washington, D.C.-based cannabis justice organization that launched Joints for Jabs, the larger program that spawned this amazing concept of rewarding people who get vaccinated with a little herbal refreshment. Today, it’s a sativa-heavy strain called Rogue River, and people seem to be enjoying it. I quickly chatted with Schiller (I didn’t want to delay anyone’s joint) about how the plan came together and then made my way out of the park, my heart warm at the sight of cops derpily standing around, unable to thwart the inebriated fun, for once.

How’d you come up with the genius idea to reward vaccinated people with weed?

Do you think the weed will help with people’s vaccine side effects?

Anecdotally, it does help with people’s side effects. There’s even some science about how the cannabinoids can help with COVID-19. I don’t like to promote research that hasn’t been duplicated with a large group, though.

What’s the response been from people so far?

It’s a full city block that we’ve got of people in line waiting to receive a free joint that was donated by cannabis activists. Everyone’s been very supportive. We couldn’t really have a good 4/20 last year, even though it was 4/20/20, so on the calendar, it was the best looking 4/20 ever. And this year, we’re a little father in society, and we believe that we can be able to share cannabis safely now.

More like this
What is sploshing, the food fetish that's taking over TikTok?
By Melissa Pandika
How to save your skin from climate change
By Melissa Pandika
'Nine Perfect Strangers' is a deranged portrait of psychedelic wellness retreats
By Erin Qualey
Stay up to date