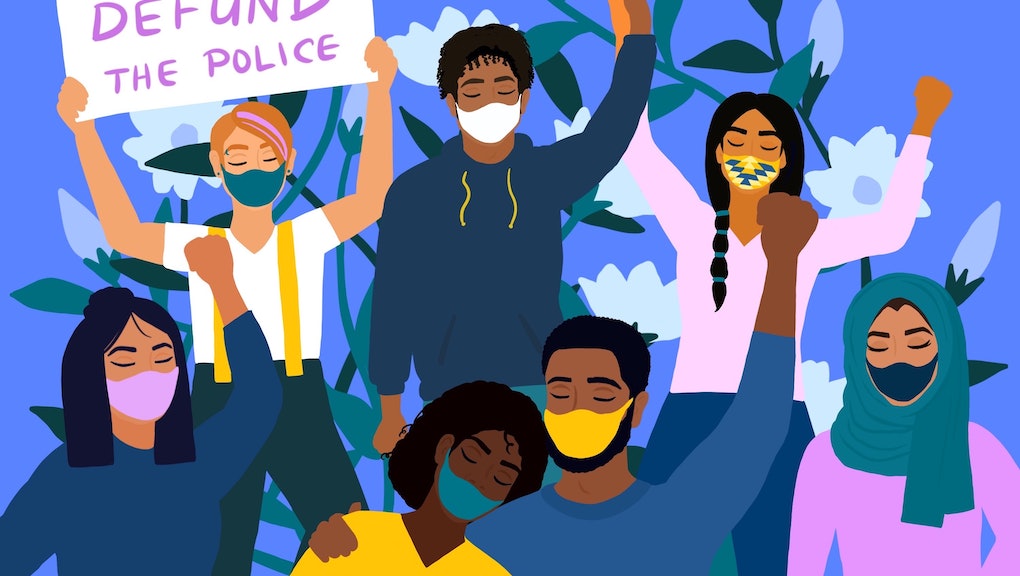 Meet the women behind the viral protest art all over Instagram

A curious phenomenon emerged in the weeks after police officers killed George Floyd in Minneapolis. Almost overnight, the only acceptable social media content became imagery and messages in solidarity with Black lives. Gone were the multitudinous, glutenidous photos of sourdough starters and dubious selfies of groups of unmasked friends. For a while, the feeds were flooded with black squares, but as the Black Lives Matter movement went mainstream in an energizing way, Instagram was also suffused with reverent illustrations of victims of police brutality.

“I am not entirely sure why my pieces happened to go viral, but it might be because everyone is scrolling through their phones right now,” Damra posited to Mic. “In a moment where we have been essentially told to stay home [...] people are looking to Instagram to engage in current events and also to process the reality we are living in.”

The first portrait Damra undertook was Arbery’s, in early May. “I honestly couldn’t bring myself to watch the video of his murder, but I read the chilling details of what happened,” the artist said. She channeled her feelings into her art as a way of working through them, “but also as a gesture of solidarity to Black communities processing their own grief. I also wanted to raise awareness of what happened to Ahmaud without sharing the triggering video of his murder,” Damra added.

Artist Paula Champagne has long honored and celebrated Black stories through her photography, video, illustration and design. “In the last year I’ve narrowed my focus to the intersection of Blackness, nature and rest,” she told Mic. Her portraits of Arbery and Taylor, rendered in muted, earthen tones, have garnered her a lot more attention recently. “I went from getting a few follows on Instagram a week to a follow every few minutes almost overnight,” Champagne said.

Arbery’s murder struck a horribly personal note for the artist. “Seeing people who look like me being murdered in cold blood is not new or sobering imagery for me. My eyes have been open to that for a long time,” Champagne said. “However, Ahmaud was murdered on my brother’s birthday, February 23. As I dodged seeing the traumatic footage of yet another modern-day lynching of another person in my community, I couldn’t shake the horrifying thought (a thought that is not new) that this could have happened to a brother of mine.”

It got Champagne thinking about honoring victims by celebrating their birthdays — in other words, their lives — instead of commemorating their unjust, untimely deaths. After Arbery, Champagne did a portrait of Taylor for what would’ve been Breonna’s 27th birthday. “I’ve seen her name and her story slip away from the minds and mouths of folks,” the artist said. “And I've had the thought (again, not new) that this too will slip away, because there are so many other Black lives snuffed out by white supremacists. By police officers who abuse their powers. By systems built on our backs that are designed to keep us down. I wanted to be sure to honor her life on her birthday, too.”

The sudden interest in her work, and the Black Lives Matter movement in general, feels like a complicated blessing. “For what feels like the first time in my life, non-Black folks are starting to see the value in honoring Black lives and supporting us, including our art and livelihood,” Champagne said. “I wish I could just celebrate it, [...] but the grief of murdered Black lives necessary to motivate white people to action, enough to think that my art matters, weighs heavy on me.”

“At my most hopeful, I believe the role of art in protest is to inspire action,” Champagne added. “At my most skeptical, I'm grappling with the reality that my art is being used for performative protest to soothe white guilt.”

Damra took a more an optimistic view of the upswell in solidarity. “As someone who has been a community organizer in Chicago for years, I know there are clear systems we organize against. We know what we don’t want. We don’t want any more Black lives targeted by police and white supremacy,” she told Mic. “Artists have the ability to create visions of a more just, equitable world. This type of art can help shift our culture, bring people together, inspire people into action and put pressure on our representatives to achieve systemic change.”

Champagne conceded that, for whatever reason, the zeitgeist’s embrace of Black lives and art is seemingly moving the needle. “Just this week, I’ve seen my art motivate folks to take tangible steps, to share stories of injustice and to write words that spark even more change. That is powerful and new for me,” she said.

Damra agreed there’s something remarkable in the power being wielded on Instagram in this pivotal historical moment. “Art can reach so many people in ways that the news or political analyses can't,” she said.