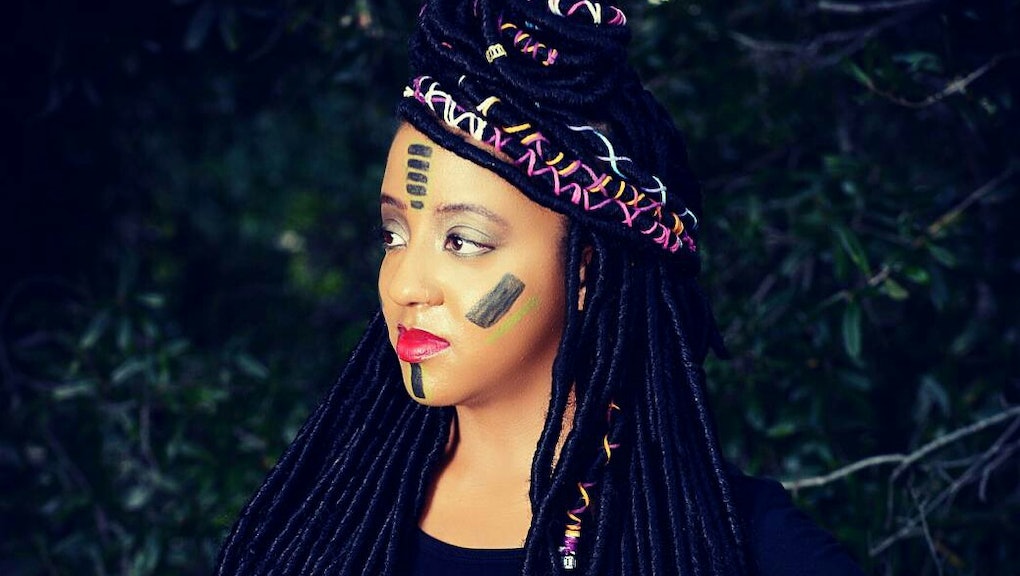 Right before her 26th birthday, Jasmin Pierre attempted suicide for the third time. Eight years before that, she had taken a large amount of pills — enough to kill her. At the hospital, she says she was handed activated charcoal to drink and sent home. With no diagnosis and no advice for a mental health treatment plan, Pierre was one of the many attempt survivors who was at risk for another suicide attempt.

“I never even thought about having a mental illness at that point because it wasn't really discussed with me,” Pierre, now a mental health advocate and certified peer support specialist, tells Mic. “I just tried to act like it didn't happen and I put it behind me.”

The chronic stress of systemic racism — which can result in poverty and segregation — on the mental health of Black people, however, is impossible to ignore when it’s right in your own backyard. Gun violence in Black neighborhoods, fatal shootings of unarmed Black people by police, daily microaggressions, and the compound effects of racism and generational trauma have all played a role in the adverse mental health outcomes in the Black community. And though Black people are 20 percent more likely to experience serious mental health problems, we’re less likely to seek treatment. Mental health issues in the Black community are seen as “a white person’s disease,” as Pierre puts it. Black women, she says, have been taught to be strong to survive — and that strength comes at a cost.

I no longer want to be subjected to the stigmas of mental health in the Black community that made me so afraid to get help in the first place.

After two more suicide attempts, a clinical depression diagnosis, and a struggle to find proper, culturally competent mental health care, Pierre sought out to find her own voice and her own community.

“I decided I didn't want to feel alone anymore, and I no longer want to be subjected to the stigmas of mental health in the Black community that made me so afraid to get help in the first place.” So, she created The Safe Place app.

The Safe Place is a psychoeducational mental health app that addresses mental health issues within the Black community. It features podcasts, videos, tips, a mental health directory, and a group forum. Though the educational materials are specifically geared toward Black women, anyone can download the app to learn more about how mental health issues uniquely impact the Black community. “Black women need safe spaces like this because they need a place to come together where no one has to label them as the strong Black woman,” she says. “But instead somewhere where they're allowed to feel, express themselves, and can absolutely feel unapologetic about it in a healthy way.”

This sense of community through social network is one piece of the puzzle when it comes to removing mental health barriers for Black women. Studies show that Black women rely on and feel protective benefits from being in supportive social circles, namely the Christian church. About 82 percent of Black women identify as non-Catholic Christians, with the majority reporting belonging to the historically Black church. The church, however, has historically had major challenges in addressing mental illness. “All I ever heard from other Black people growing up is, ‘we have to be strong — just pray,” Pierre says. That peer support, however, is beneficial and an extremely important part of mental health recovery. Women with mental health concerns are increasingly turning to their online peers for a safe, nonjudgmental space to speak openly about their personal struggles with someone who shares the same experiences. While peer support does not replace the advice or treatment of mental health care professionals, it addresses a need that professionals, who don’t usually share their own personal experiences, can’t fill.

For Black women with mental health concerns, health care professionals also present yet another barrier Pierre hopes to address. “The mental health care system needs to do a better job when it comes to recognizing the unique differences in mental health issues in minorities, and we need more minority based mental health resources in underprivileged communities,” she says.

Mental health professionals can benefit from the app as well, she says, by using it to better understand their Black patients. In the section of the app dedicated to creating a dialogue about the effects of society on mental illness in Black people, there are stories of women who have been called an angry Black woman, told by doctors they are too strong to take medication, put in a position to be the rock of the family, and never feeling like enough. Practitioners aiming to be culturally competent need to hear these stories. With a long history of medical abuse and continued discrimination against Black people, the health care system doesn’t have our trust. Without that trust, Black people are less likely to seek care.

Black people are also 7.3 times more likely to live in high poverty neighborhoods with limited to no access to mental health care services. Pierre knows firsthand the effects of low-quality mental health services. “I tried to get help after my third suicide attempt, but I'm from New Orleans, one of the worst mental health care systems,” she says of her predominately Black home town.

We need to stop thinking prayer and strength is going to solve all the mental health issues in the Black community.

According to a report by the New Orleans Health Department, “little priority” was given to address mental health needs following Hurricane Katrina. Year after year, Louisiana’s budget cuts have chipped away at access to mental health services, leaving more than 13,000 people in the state without psychiatric support. Pierre still doesn’t feel like she’s received proper mental health care that has helped her manage her depression. That hasn’t stopped her from taking up her fight. In July of 2019, Pierre spoke in front of Congress about The Safe Place and how media and technology can be used as a tool to address the suicide rate among Black youth.

We need a large-scale change. The health care system, the church, the stigma in the Black community — these barriers need to come down. Pierre won’t stop having conversations and working to spread awareness about Black mental health. Her goal is to add better features to the app and do even more outreach to spread the word about it, with the ultimate goal of helping to heal a community.

“We need to stop thinking prayer and strength is going to solve all the mental health issues in the Black community,” she says. “God gave us resources in this world for a reason, and we need to use them. Mental health issues are indeed medical issues, too.”

More like this
UFOs are real but might not be aliens — and that's somehow more terrifying
By AJ Dellinger
Bill Gates is yet another reminder that wealth is not a virtue
By AJ Dellinger
What is facial recognition — and why is it so sinister?
By Vanessa Taylor
Stay up to date