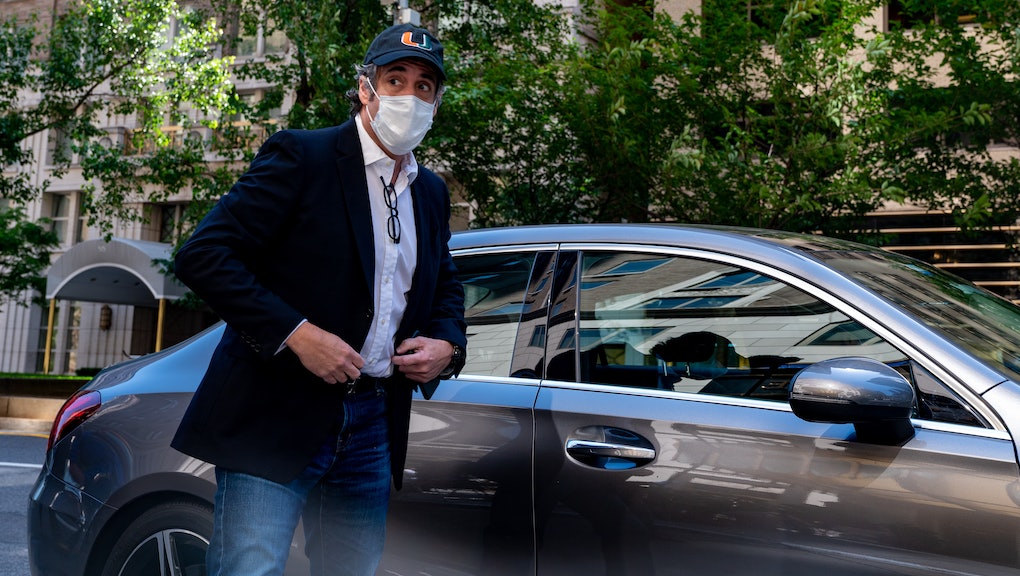 I am not the President of the United State's former personal attorney, fixer, and alleged criminal enabler. And, because I am not any of those things (thank god) I have also never been sent to federal prison, nor been targeted for harassment by the most powerful man on Earth.

But if I were all of the above, and if — say — I had been granted the astronomically lucky fortune to be allowed to leave federal prison and return home amidst a global pandemic... well, I don't know what I would do, to be honest. I do know, however, what I wouldn't do: I wouldn't do anything even remotely likely to screw up my one shot at freedom (of a sort) to the point that I'd need to be hauled back to prison after only a month out from behind bars.

I am not, in other words, Michael Cohen.

Cohen, Donald Trump's onetime legal pit bull-cum-hapless whipping boy, was picked up by U.S. Marshalls and returned to federal custody on Thursday, a spokesman for the Bureau of Prisons announced, adding that Cohen had "refused the conditions of his home confinement."

"As a result, [Cohen] has been returned to a BOP facility," they continued.

Cohen has been released from Otisville Correctional Facility, in Orange County, NY, on May 21, and had initially been slated to serve out the remainder of his three year sentence at home in New York City. His release was initially part of a broader Justice Department effort to help stem the tide of Coronavirus cases in the federal prison system, by allowing certain prisoners to serve some or all of the remainder of their terms at home.

Speaking with CNN, Cohen's attorney Jeffrey Levine claimed his client's re-apprehension was the result of refusing to agree to uniquely onerous conditions of his release, which would have allegedly barred him from making media appearances.

"I've never seen any language like this in my life that would strip a person of their First Amendment rights to communicate with the media," Levine explained. When he and Cohen objected to the stipulations "US Marshals office came with shackles to shackle Michael Cohen."

In addition to balking at being denied access to the media, some have speculated that Cohen's detainment may also have stemmed from a July 2 dinner at Manhattan's Le Bilboquet French restaurant. Roger Adler, another of Cohen's attorneys, pushed back on connecting the dinner outing with Cohen's re-capture, telling The New York Times that he was "unaware of any conduct which would have warranted interfering with [Cohen's] medical furlough."

"It’s my hope that it’s a misunderstanding of some kind that can be promptly resolved," Adler said.

Shortly before his release from prison in May, Cohen was reportedly threatened by President Trump's current personal attorney, Charles Harder, over reports that Cohen planned to write a tell-all book about his experience working for Trump.