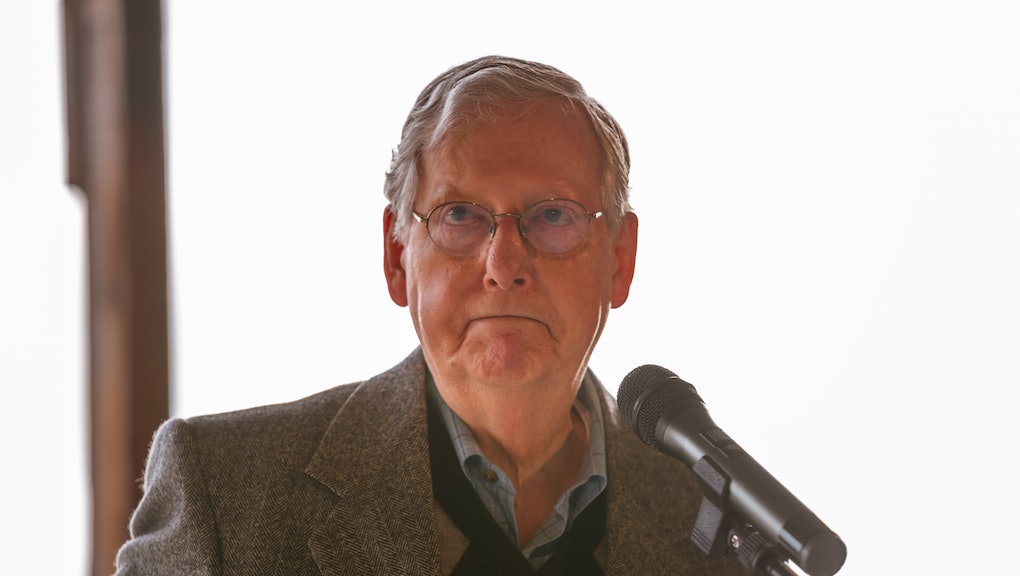 There is a strong, depressing case to be made that the most powerful person in the United States is septuagenarian elected specifically to represent the interests of just a few million Kentuckians, rather than the entire American public. That lucky man would be Senate Majority Leader Mitch McConnell, who has spent the past three-and-a-half decades yanking the country rightward thanks to the arcane rules of the Senate and a craven but deep understanding of just what makes — and keeps — political power.

Over the course of the Trump presidency, McConnell has transformed both his wing of the legislative branch and the federal judiciary into conservative havens where Democratic-proposed laws go to die, and hard-right judges go to flourish. He's done this, of course, thanks in no small part to the GOP's solid Senate majority, and the MAGA movement that's energized the Republican party at all levels of government.

Now that there stands a very real chance that Joe Biden will be the next president of the United States, McConnell has reportedly already begun to plan just how he can work to kneecap an incoming Democratic administration that has gone out of its way to signal its unwillingness to deviate from the political center.

It's crucial to remember that at this state, Biden has not won the election (and neither has Trump, despite what he says). Yet according to Axios, the Democrats' likely failure to retake the Senate — pending an apparent double run-off for Georgia's two seats — has forced the Biden camp to abandon hopes for a left-leaning Cabinet, with one source close to McConnell comparing the impending clash over nominees to "armed camps" wherein no "radical progressives" or even moderately controversial names would even be considered by the Republican majority.

Whether Biden intends, or ever intended, to nominate anyone significantly progressive in the first place is an open-ended question, although some supporters of both Sens. Bernie Sanders and Elizabeth Warren had hoped one of the pair might be named to a Biden Cabinet in gratitude for their work on his general election campaign. Likewise, Stacey Abrams, whose work to protect voting rights has proven instrumental in keeping Biden a viable candidate in Georgia, is another possible pick who might meet resistance by McConnell's troops.

The irony is twofold. First, there's the fact that there is indeed precedent to get around this sort of nomination obstruction, as demonstrated by none other than President Trump himself, who littered his administration with various "acting" secretaries as a way to avoid Senate nomination fights. But Biden would almost certainly refrain from going down this path, in no small part because while Republicans have proven fully adept and eager to subvert the various normal processes of governance, Democrats still cling to those norms, even as they've been proven to be totally ineffectual at actually making a difference in the face of genuine power.

Which brings me to the second irony at play here: Biden has never given any indication that he's interested rocking the boat, or tacking hard left in the first place. If anything, his entire presidential campaign was predicated on staying steadfastly centrist, and overtly rejecting leftist labels and policy agendas. As he's said time and time against over the past year, he wants to work with the very Republican Party that's spent so much time and effort tarring him and his family as corrupt crime bosses. McConnell doesn't need to scare him into nominating milquetoast moderates for his Cabinet (including, reportedly, some Republicans) — Biden's probably already there.

Still, McConnell understands power better than anyone else in the country. Whether the threat to neuter any incoming Cabinet nominees is real, or just bluster, it's likely going to bolster the GOP's sense that, even if they're no longer in control of the White House, they're still ultimately the ones in charge.