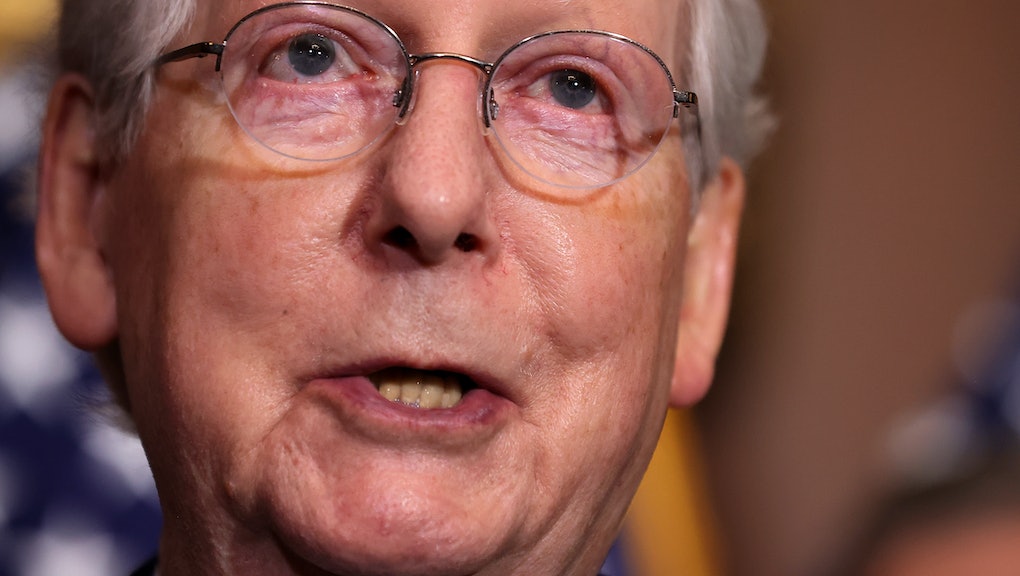 The Democrats want it. The president wants it. The American public overwhelmingly wants it.

And yet, despite seemingly being pressed by all imaginable sides to provide a paltry $2,000 in direct COVID-19 relief after nine months of inaction, Senate Majority Leader Mitch McConnell (R-Ky.) proved Wednesday that he simply does not give a single dangling damn if you die penniless in the middle of a global pandemic.

"The Senate is not going to split apart the three issues that President Trump linked together," McConnell declared, as he blocked attempts by Democrats to pass an clean bill providing every adult with $2,000 in coronavirus relief funds — an increase from the previously negotiated, and laughably insufficient $600 stimulus checks — by refusing to allow the Senate to take up the proposal alone.

Instead, McConnell insisted, he would only consider the legislation if it came as part of a triune measure to address wholly unrelated issues: relief payments, an investigation into (virtually nonexistent) mass voter fraud, and a repeal of the law that shields social media companies from lawsuits over third-party content hosted on their sites.

Senate Minority Leader Chuck Schumer (D-N.Y.) blasted McConnell's effort to deny people their desperately needed relief funds, saying pointedly on the Senate floor that "there is no other game in town than the House bill" for $2,000, which passed earlier this week. Sen. Bernie Sanders (I-Vt.), who spent the weeks leading up to Wednesday's showdown vowing to do everything in his power to ensure the $2,000 payments, was even more direct.

"We have a very unlikely ally in President Trump," Sanders declared, standing in front of a poster board featuring the president's demand for $2,000 checks. "Amazingly enough, the president of the United States is right."

"Let me just make it clear for the majority leader that 10 out of the poorest 25 counties in the U.S. are located in Kentucky," Sanders continued, using McConnell's own constituency to target the majority leader's commitment to poison-pilling the legislation with unrelated add-ons that would ensure it becomes dead on arrival for Democrats.

For McConnell, who helped engineer one of the most grotesquely lopsided tax deals of all time to benefit the wealthy, it appears the idea of possibly sending these comparatively minuscule relief checks to households who don't look like paupers in a Dickens tale is simply a bridge too far.

"It's hardly clear that the federal government's top priority should be sending thousands of dollars" to those who haven't lost their jobs during the pandemic, McConnell stated during Wednesday's floor debate in a seeming push toward the sort of means-testing that frequently excludes the very people its designed to help, and which would only further delay the lifesaving relief funds from being released.

McConnell, no matter how craven or heartless he may appear to be, is no dummy. If he's willing to stand in the way of increased COVID-19 payments, even while the president is demanding them publicly, he likely knows that Trump's saber-rattling is just that — sound and fury that ultimately signifies nothing. When push comes to shove, McConnell seems to believe, Trump simply doesn't care enough about $2,000 checks to actively lobby Republicans to support a clean bill, outside of the occasional irate tweet. And as long as Trump won't put any significant political muscle behind the measure, then McConnell is comfortable letting people and businesses go bankrupt and die.

For the time being, the public is left with $600 crumbs to look forward to nearly a year of a crippling viral pandemic. When the bankruptcies and evictions start cascading into an unstoppable avalanche of financial tragedy, just remember that McConnell could have helped — simply by getting out of the way — and chose not to.