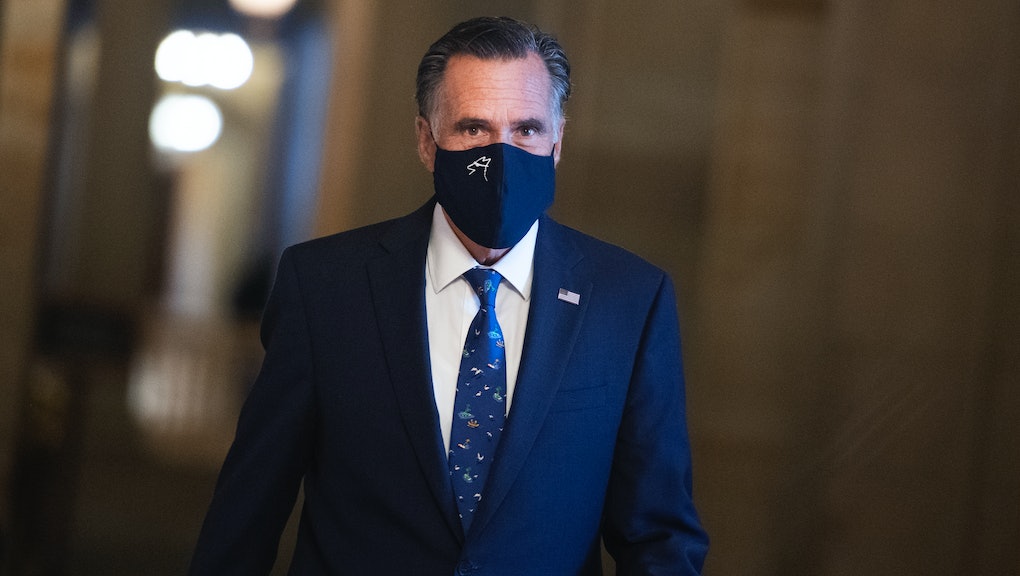 It's been less than a week since Supreme Court Justice Ruth Bader Ginsburg passed away, and Republicans in the Senate are ready to push her replacement's nomination process forward. In 2016, Republicans held up a confirmation vote on President Obama's SCOTUS pick, claiming they were doing so because it was an election year. But even before President Trump has announced a nominee for the newly open seat — which he'll reportedly do on Saturday — many of the same lawmakers are already lining up to vote in favor of the president's pick. And it looks like the GOP will have enough votes — a simple majority of 51 — to confirm the eventual nominee, possibly before voters head to the polls in November.

Deciding on a new justice to appoint to the high court is typically a months-long process, with time for Senate hearings in which members of both parties can thoroughly question the nominee — but in this case, partisanship is winning out over process (and precedent). In the wake of Justice Ginsburg's death and Senate Majority Leader Mitch McConnell's vow to fill her seat as soon as possible, all eyes have been on a handful of Republican senators who were seen as potential swing votes.

But on Tuesday, it became evident the numbers are in McConnell's favor. Senator Mitt Romney (R-UT), who has spoken out against President Trump in the past, said in a statement that he's open to considering a nominee. "The Constitution gives the President the power to nominate and the Senate the authority to provide advice and consent on Supreme Court nominees," Romney said. "If the nominee reaches the Senate floor, I intend to vote based upon their qualifications."

Senator Chuck Grassley (R-IA) also vowed to vote in favor of the nominee and argued that Democrats would do the same thing if the roles were reversed. "So, make no mistake: if the shoe were on the other foot, Senate Democrats wouldn’t hesitate to use their Constitutional authority and anything else at their disposal to fill this seat," Grassley said in a statement.

At this point, only two GOP senators — both of whom are seen as vulnerable in the upcoming election — have pledged not to consider a SCOTUS nominee before Americans choose the next president: Susan Collins (R-ME), who faced an onslaught of angry constituents after voting to confirm Justice Brett Kavanaugh; and Lisa Murkowski (R-AK), a pro-choice Republican who said she believes "the same standard" as 2016 "must apply."

But not all Republicans in tough reelection races feel the same. Cory Gardner (R-CO), rounds out the group of senators who are all for rushing the nomination process. In his statement released Tuesday, Gardner not only expressed support for allowing a vote to occur, but also confirmed he will vote in favor of that person — apparently not needing things like an official nomination or hearing to make that call. "I have and will continue to support judicial nominees who will protect our Constitution, not legislate from the bench, and uphold the law," he said in a statement. "Should a qualified nominee who meets this criteria be put forward, I will vote to confirm."

Even with Collins and Murkowski falling out of Republican rank and file, the GOP will have enough votes to push forward a speedy confirmation process. That said, it won't be without a fight. In a Monday interview, House Speaker Nancy Pelosi told ABC's George Stephanopoulos that Democrats "have our options" and "have our arrows in the quiver," and did not rule out the possibility of impeaching Trump for a second time.

Meanwhile, other Democrats are looking to 2021 and the possibility of "packing" the Supreme Court — adding more justices to the currently nine-person bench — if the Senate turns blue. "For many of us, that wasn't our preference, but the fact is you have Mitch McConnell not abiding by, not working in good faith under the Constitution," former presidential candidate Julián Castro told BuzzFeed's News O'Clock podcast. "If you have that kind of abuse of the system, then I think that yeah, Democrats should be open to different ways that we can stave off draconian changes to our fundamental rights."

More like this
Nancy Pelosi took a stand on the Jan. 6 committee, and it left Republicans whiny as hell
By Rafi Schwartz
The first insurrection felony sentence is here, and nobody's happy about it
By Rafi Schwartz
Stephen Breyer won't retire from SCOTUS because he's having too much darn fun
By Rafi Schwartz
Stay up to date