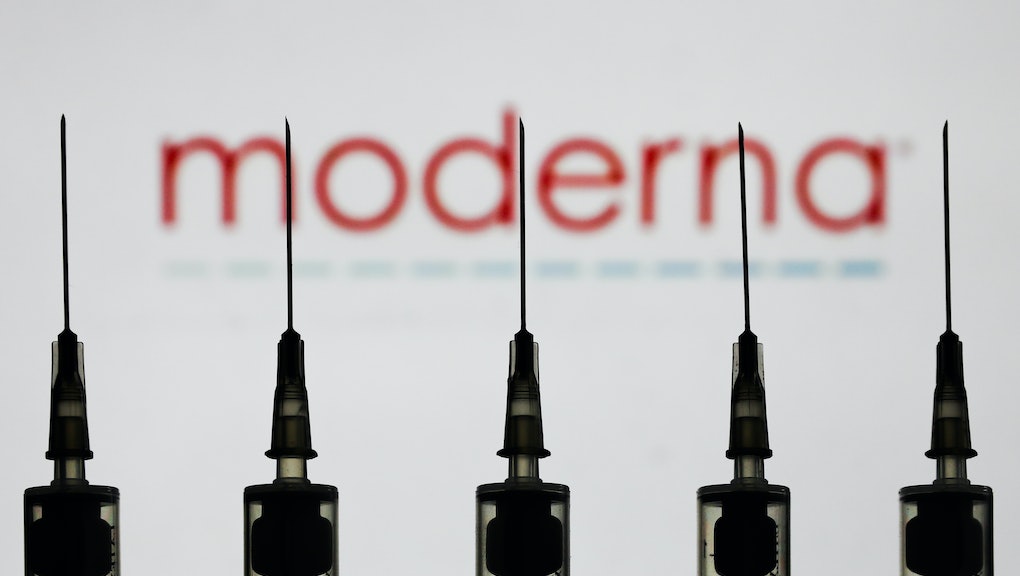 Coronavirus cases and deaths in the U.S. have far surpassed the grimmest early predictions. Just last week, we saw a million new cases. As a new wave of infections moves towards its peak, drug companies are in a race to beat it — and each other. Massachusetts-based biotechnology company Moderna claims that its coronavirus vaccine is 94.5% effective. Here’s what we know.

Moderna’s clinical trial — which is still in progress — includes 30,000 participants. Half of them received a saline shot placebo and the other half got the vaccine. Ninety of the participants who only received the placebo did contract COVID-19 within several months of participating — not as part of the study, just going about their daily lives — and 11 had severe forms of the disease. Only 5 of the individuals who received the actual vaccine contracted COVID-19, and none of them got seriously ill, reported CNN.

Moderna deems their vaccine is safe, since none of the participants experienced serious side effects, but a few reported headaches and body aches. The company plans to apply for approval of their vaccine with the Food and Drug Administration (FDA) later this month, and the U.S.’s top infectious disease expert, Anthony Fauci, told CNN that we can expect the first round of vaccinations to start in December.

You can’t make your vaccination appointment just yet, though. First of all, Fauci said that while vaccines could start by the end of December, priority will be given to health care workers, people with underlying health conditions, and the elderly. But since not everyone has confidence in a vaccine, there’s hope that the 50-70% of us who do want to be vaccinated will be able to do it by next summer.

This is the second time in a week that we’ve gotten hopeful vaccine news. Last week, Pfizer announced that they are close to applying for FDA approval on a vaccine that is 90% effective. Both these vaccines use similar technology that delivers messenger RNA — mRNA — into the body, reported CNN. This mRNA makes antibodies to the spikes that give coronavirus its name, so when someone who has gotten the vaccination is exposed to the novel coronavirus, the antibodies will attack the spikes of the virus and prevent them from gaining access to the cells of that person’s body and therefore prevent infection.

A potentially major advantage of the Moderna vaccine is that it remains stable and effective for up to 30 days at room temperature, and up to six months frozen or refrigerated, according to Moderna’s press release. The Pfizer vaccine, on the other hand, must be stored at 70 degrees below 0, celsius — about 50 degrees colder than your average freezer. That means that not only will any facility that wants to distribute the Pfizer vaccine have to purchase the vaccine, they will also have to invest in storage, which makes the Moderna vaccine a potentially more viable option for places that lack the resources to make those investments. Basically, if Moderna’s claims are accurate, this vaccine could be available to more than just the 1%.

Moderna and Pfizer both released preliminary data on their large studies by press release. This is important to note because neither company has released the data details that would allow outside experts to evaluate the claims they’re making. The fact that the data has not been peer reviewed doesn’t mean that it’s inaccurate, but it does mean that no third parties have been able to verify their claims, the New York Times reported. So, while this is a hopeful moment, it’s important to remember that Moderna and Pfizer are both Big Pharma megaliths, each trying to sell us the idea that their vaccine is the best vaccine. It’s in their best interest to deliver on their claims, but they’ll make a lot of money on our hope in the meantime by way of advance sales.