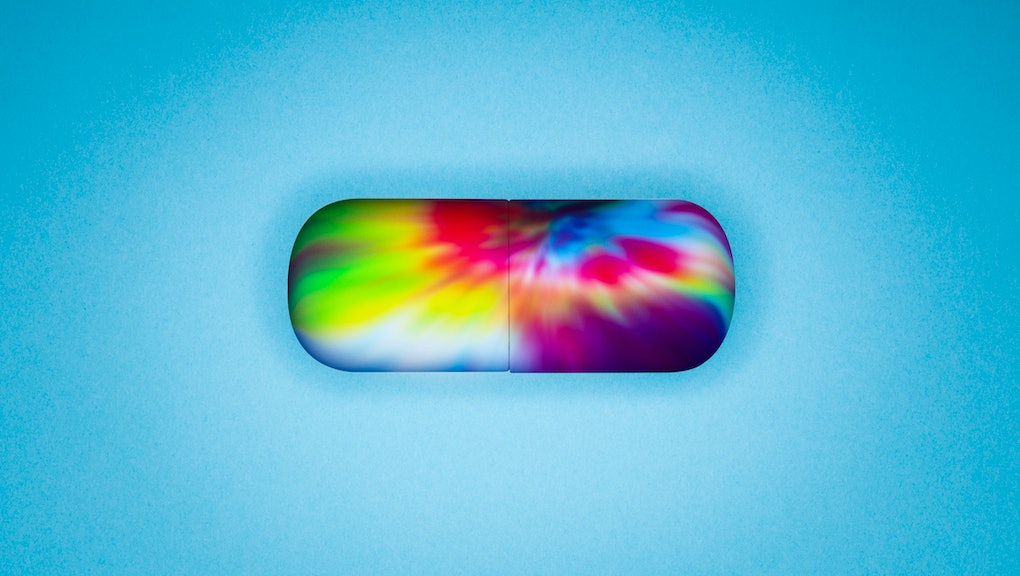 Even before the recent pandemic and protests against the scourge of white supremacy, Americans were stressed out and and experiencing a full on loneliness epidemic. It's been so intense that research suggests that many of us sought to self-medicate. A study published earlier this month in the journal Drug and Alcohol Dependence found that there’s been a rise in LSD use over the past few years.

People might be turning to LSD, a substance used chiefly as a mode of escape, to seek temporarily relief from our harsh reality, Andrew Yockey, a doctoral candidate in health education at the University of Cincinnati and lead author of the study, told Scientific American. “Now that COVID’s hit, I’d guess that use has probably tripled.”

Yockey’s team analyzed responses from 168,562 U.S. adults to the annual National Survey on Drug Use and Health, spanning from 2015 to 2018 in order to capture LSD use around the time of the 2016 presidential election. They saw that the number of respondents who’d used LSD in the past year had increased around 56% during the three-year time period.

LSD use probably won’t reach the levels seen in the 60s and 70s, though. Whereas 10% of high school seniors reported having used LSD in the late 70s, only 6% of today’s high school seniors reported having used it, Joseph Palamar, a drug researcher at NYU Langone Health, who wasn’t involved in the study, told Scientific American. That’s probably because of the emergence of newer psychedelics, although Palamar notes that LSD remains the most popular.

Since the National Survey on Drug Use and Health doesn’t ask those completing it why they consumed LSD, or how much, it’s not entirely clear what’s fueling this increase in use, according to Scientific American. The uber-trendiness of microdosing might play a role, David Nutt, a neuropsychopharmacologist at Imperial College London, who wasn’t involved in the study, told the magazine.

Microdosing involves taking a fraction of a dose that would induce a trip, usually for wellness purposes like finding your chill or enhancing your creativity. Palamar suspects the growing popularity of dance festivals may have something to do with the elevated LSD use, based a recent study he co-authored on EDM party attendees in New York City.

There may also be a confluence of factors driving the trend, including the emergence of studies investigating the possible therapeutic properties of psychedelics, Yockey explained to Scientific American. The problem is, such research is limited because of the extreme difficulty of conducting it in most countries.

In the U.S., LSD is classified as a Schedule I drug, meaning it has no accepted medical use and a high risk of abuse. Yet according to research, it’s not physically addictive, overdosing on it generally isn’t fatal, and some who’ve overdosed on it have actually reported lasting health benefits. In fact, the few studies that exist on LSD show it could increase positive feelings, like trust and openness, as well as lower anxiety and depression.

Yockey worries that the dearth of research on LSD’s potential benefits may add to the stigma that already surrounds it, according to Scientific American. Nonetheless, it’s pretty clear that people are finding value in this substance — and they’ll probably only continue to do so as this pandemic, racial reckoning, dystopic presidency, and climate crisis unfold.

More like this
Here's how scientists plan to create a less addictive opioid
By Aaron W. Harrison
Should vaccinated people wear masks indoors?
By Peter Chin-Hong
The second vaccine shot is actually the star, new research shows
By Tracey Anne Duncan
Stay up to date