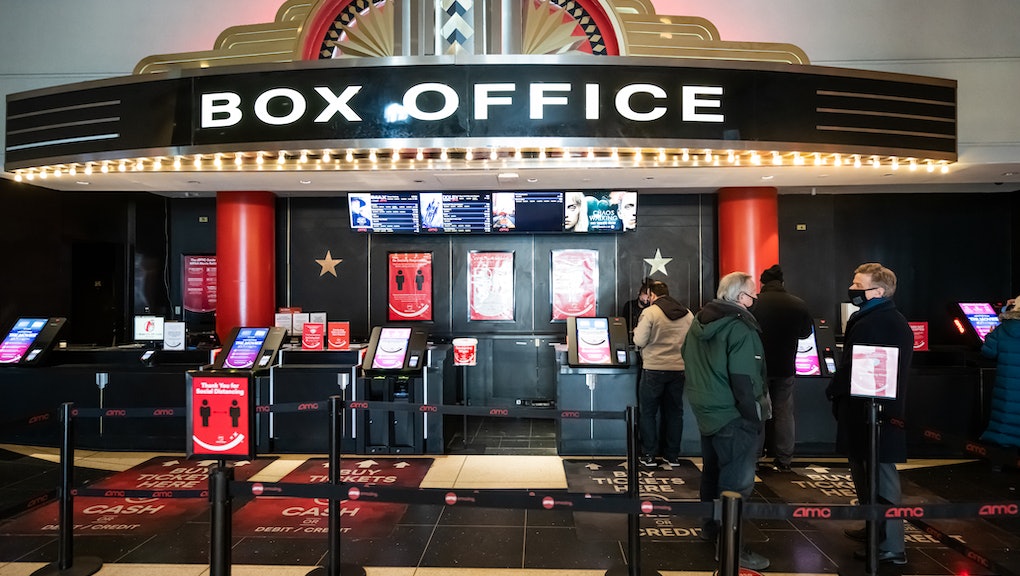 In the beginning, it was easy to both underestimate and overestimate the extent to which everything would change. Now that we’re one year out from the pandemic, it’s quaint to remember even the most hopeful entertainment prognosticators thinking coronavirus might alter daily life for a few months, with movies returning sometime in the fall or winter. As Sony eventually kicked its James Bond-sized can down the calendar a full 18 months to this October, it clearly didn’t come to pass.

This amounted to a year where movie theaters were essentially a nonfactor, which tracks with any sort of activity where people might huddle up together in the same indoor space. To get a sense of just how much they disappeared, check out this nifty chart of domestic weekend box office returns over at CNBC. You’ll notice a sort of rebound over the fall and right around Christmastime — when the entire box office notched just $23.8 million in ticket sales.

The effect of an entire year with barren movie theaters, along with the allegedly industry-altering move by Warner Bros. to premiere its entire slate of 2021 releases directly on HBO Max, were supposed to spell death for movie theaters. Exasperated early takes asserted that the HBO Max announcement would change “the whole movie industry,” assuming that the general public would be receptive to watching movies at home indefinitely, after a year of doing so against their will. But what if that just... doesn’t happen?

If international returns are any indication, this summer's new releases might pull in some massive receipts.

After everything that’s happened in the past year — with venue and restaurant closures piling up under the weight of insufficient rent support — you’d be forgiven for leaning into a doomer outlook. And yet there’s reason for hope; vaccines are coming, in the millions per day. Studios are at least publicly confident in getting enough bodies into seats by early summer for their biggest films. They might be right, and if international returns are any indication, the new releases might pull in some massive receipts.

Over in China, Detective Chinatown 3 recently topped Avengers: Endgame for the largest opening weekend haul in a single territory, bringing in a massive $398 million. Perhaps even more impressive, the family dramedy Hi, Mom became China’s second highest-grossing film of all time in just under a month. It’s also the second highest-grossing non-English film of all time, with a reasonable chance of taking the top spot in both categories. China’s COVID trajectory has certainly looked radically different than in the Americas, but they still endured mass closures and lockdown measures. It’s fairly easy to imagine a majority-vaccinated American public reacting accordingly to, say, Fast and Furious 9.

The HBO Max panic certainly stems from legitimate concerns about streaming supplanting the theatrical experience, which have snowballed throughout the past decade. But if major players in Hollywood, including Warner staples like Patty Jenkins and Steven Soderbergh, aren’t willing to play ball with streaming-only premieres, then why should we expect it could stick? Although the platform’s being as cagey as its older brother in Netflix about streaming numbers, Wonder Woman 1984 almost certainly suffered mighty losses without hitting theaters. I suspect people will be itching to get out of watching movies on their stupid little screens for the first time in a year, if there are theaters waiting for them.

What looked like an exceedingly bleak atmosphere for movie theaters even before the pandemic certainly grew more imperiled over the past year. But after the drastic decline in sales and available films to screen, independent theaters got a much-needed boost from the second and third stimulus packages. Considered a “lifeline into the spring,” the second stimulus bill included $15 billion for smaller movie theaters. And the befuddling AMC stock surge appears to have actually boosted its odds of avoiding bankruptcy, or at least bought the struggling chain some time — although not everyone considers it a reliable lifeline.

It’s weird to feel any approximation of hope for the survival of arts, film, and live performance when so much has been lost already. But if moviegoers can outlast the light sadism of leaders encouraging them to hit the theaters already, it could be a busy, frantic summer for tentpoles racing their way back onto the big screen. The forces of cultural monopoly have pushed on uninhibited, even in the first year without a new Marvel film in over a decade, and are no less of a threat to independent artists or theaters than ever before.

And yet the entire industry won’t go down quite so easily, carrying on with the same breadth of smaller movies finding their niche on streaming platforms, and studio blockbusters drawing crowds that might exceed pre-pandemic levels. If you’re as annoyed by your home viewing arrangement as I am, then there’s no reason to think what happened to Hi, Mom couldn’t also be the case for Venom: Let There Be Carnage or Luca.

More like this
These organizers are fighting to make sure non-English speakers get vaccinated, too
By Vanessa Taylor
“Panny,” “panettone,” “panini”: Why silly pandemic nicknames are getting us through it
By Melissa Pandika
'Exterminate All the Brutes' is a messy, ambitious documentary that ties together genocide, white supremacy, colonialism ... and Josh Hartnett?
By Nicholas Russell
Stay up to date