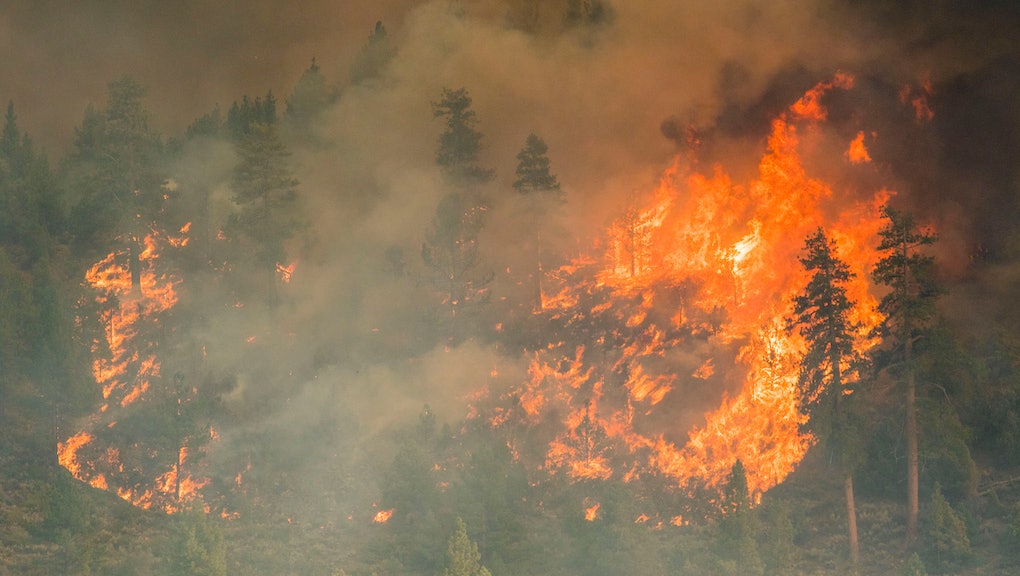 Much of the American West is on fire. Again

This summer, the weather throughout the United States has been defined by extremes, as 30 cities started off with record high temperatures. But while hot weather is one thing, fire is another entirely. And currently, wildfires are blazing on the West Coast, while fires in Canada are causing problems for Midwestern residents.

Wildfires are becoming increasingly common throughout the nation. Last summer, the National Interagency Fire Center reported nearly 59,000 wildfires, compared to just under 51,000 in 2019. With this year set to be one of the driest years in a millennium, particularly for those in the western part of the U.S., it also means wildfires are once again taking things up a notch.

If you've been paying attention to the news, you might've heard about the Bootleg Fire in Oregon, which has already burned 300,000 acres. There's also the Dixie Fire in California, where Pacific Gas & Electric, the U.S.'s largest utility, says their equipment may have something to do it. If the name sounds familiar, that's because PG&E was linked to the 2018 Camp Fire that killed 85 people.

Unfortunately, these are only two examples of wildfires currently ripping across the U.S. Per BBC, there are over 80 major fires spread out across 11 states. Beyond California and Oregon, an interactive map produced by The New York Times shows active fires in Washington, Idaho, Montana, and others. In Minnesota, the Superior National Forest officials expanded a temporary closure of the Boundary Waters Canoe Area Wilderness due to growing concerns posed by wildfires burning just across the Canadian border.

There are a few reasons behind the U.S.'s increasingly intense wildfires. Of course, you can't ignore climate change in this discussion. Regardless of whether fires are started from natural causes like lighting strikes, as is the case with two-thirds of areas burned by wildfires, or for human-caused reasons, like a gender reveal party gone wrong, climate change is why these fires are becoming so much worse once they've been started.

Last year, Mic reported that Noah Diffenbaugh, a climate scientist at Stanford University and the Kimmelman Family senior fellow at the Stanford Woods Institute for the Environment, noted that the western U.S. has seen the area burned by wildfires increase about tenfold over the last four decades. Per Diffenbaugh, part of that is due to the effects of long-term warming, as rising temperatures can dry out trees and other vegetation, essentially giving wildfires more fuel.

"We have very clear evidence that global warming is increasing the flammability of fuels, which increases the risk of large, disruptive wildfires when there is ignition and when the other conditions for wildfire come together," Diffenbaugh told Mic, noting that in California specifically, "We have by far the most area burned of any year in modern history. We have the largest, third largest, and fourth largest wildfires that have burned in the last month. We have had four of the eight largest and five of the 15 largest fires [in state history]."

In addition to climate change, the Times reported that fire-suppression policies are exacerbating the issue, too. Wildfires by themselves aren't necessarily evil, and in fact have some ecological benefits. As National Geographic reported, some plants and animals rely on periodic wildfires to maintain ecological balance. And historically, Indigenous people in the U.S. and globally have used controlled burns to help protect the forest, renew food sources, and help ensure that larger wildfires would not become a problem.

But as settlers began to spread across the U.S., wildfires became bad no matter what. So, states set up policies to stop them regardless of what the land actually needed. But after years of increasing disaster, Indigenous people in states like California are revitalizing the traditional methods. As Rick O'Rourke told The Guardian, "Our first agreement with our creator was to tend the land. It was taken away from us, and now we’re trying to reclaim it."

More like this
Amid daily reports of catastrophe, Americans are finally starting to realize climate change is bad
By AJ Dellinger
Heat waves are killing baby birds by forcing them to flee their nests before they can fly
By AJ Dellinger
This is what it looks like when a city floods in real-time
By AJ Dellinger
Stay up to date