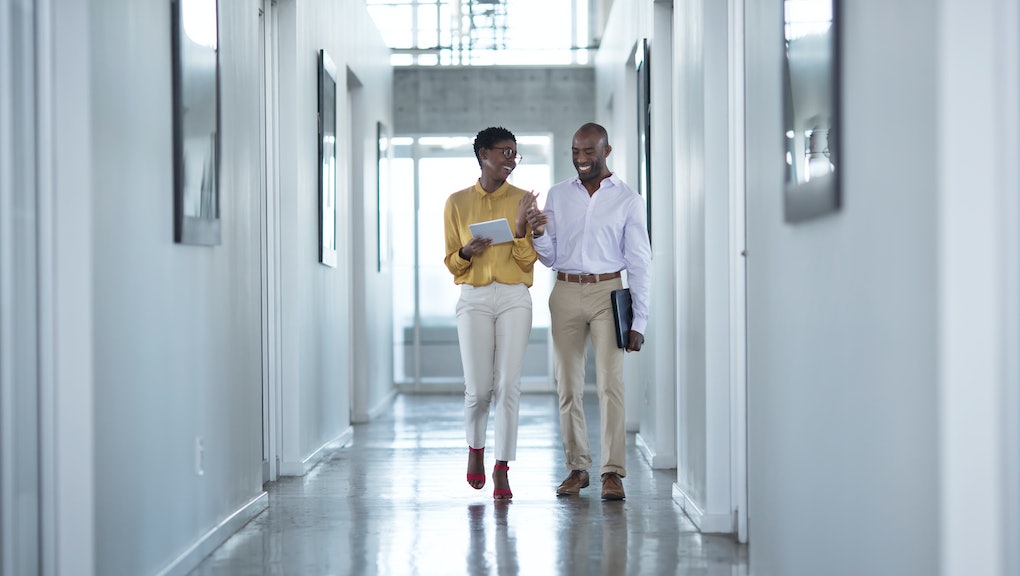 Mutual flirting with a coworker could reduce stress, according to science

The recent, much-needed uptick in addressing sexual misconduct has sparked a lot of important conversations about appropriate workplace behavior. Over the past year or so, countless companies have implemented new rules meant to protect people from unwanted sexual advances. But welcome romantic and even “sexual banter,” on the other hand, is a whole ‘nother story. A new study out finds that flirting with a coworker could actually have health benefits.

Researchers from Canada, the U.S., and the Netherlands surveyed participants from all over the world about their experiences with non-harassing sexual behavior. The researchers asked about things like “sexual storytelling, compliments, coy glances, jokes, and innuendo, and general flirting.” They found that being the recipient of flirtation between peers can relieve stress and make people happier at work.

But aren’t we supposed to have a strict no-innuendo policy in all professional situations now? In the hope of quelling sexual harassment at work, many companies’ new policies are quite strict. Researchers conducting this study, however, questioned “whether recent zero-tolerance policies toward workplace sexual behavior are missing the mark.”

"When flirtation is enjoyed, it can people feel good about themselves, which can then protect them from stressors in their lives," said Leah Sheppard, co-author of the research and professor of management at Washington State University School of Business, in the study.

“When individuals feel good about themselves via the psychosocial resources offered by enjoyed social sexual behavior, they are likely to feel more upbeat rather than distressed," the study found. In other words, welcome (heavy emphasis on “welcome”) flirting can be a mood booster that makes work more fun.

Not only can flirting at work be a positive experience, it can also help buffer negative experiences. The study found that folks who were experiencing workplace injustice — like being treated unfairly by supervisors — felt less stressed out and slept better when people flirted with them. How does that work? According to the findings, being the target of welcome flirting increases both self-esteem and also social esteem.

It’s important to note that while folks found flirting with other folks on their level relaxing, they did not welcome the same behavior from supervisors. Naturally, that dynamic involves power more directly and can easily turn into something terrible.

Also, the line between "flirting" and sexual harassment can be rather fine in certain situations, so it's important to note that we have to consider this research along with a deeper understanding of what differentiates the two. The Guardian's piece on this topic points primarily to recognizing the context of the situation, and assessing whether any advances are making the person uncomfortable. Any HR rep (and decent human) will tell you that when in doubt, back the hell off. Or if you're the receiver of that unwanted attention, report it to someone you trust.

Some folks complain that new rules and norms make them feel like their behavior is under constant scrutiny. To those folks, I send a resounding, Ok boomer — welcome to a world in which you must consider the effect of your behavior on others.

The key to acting on this research, is of course, having a clear understanding of consent and of power dynamics in the workplace. But as opposed to really strict rules at work (“policies such as the five-second stare limit reportedly in place at Netflix or NBC's ban on sharing cab rides and guidelines for coworker hugging"), it could be beneficial to create rules that protect people and also allow them to be complex social beings in the workplace.

More like this
Remote work has made things even harder for marginalized employees, says a new study
By Tracey Anne Duncan
How to file your taxes: A beginner's guide
By Melissa Pandika
Too much sitting will wreck your life — but some types are better than others
By Wuyou Sui and Harry Prapavessis
Stay up to date