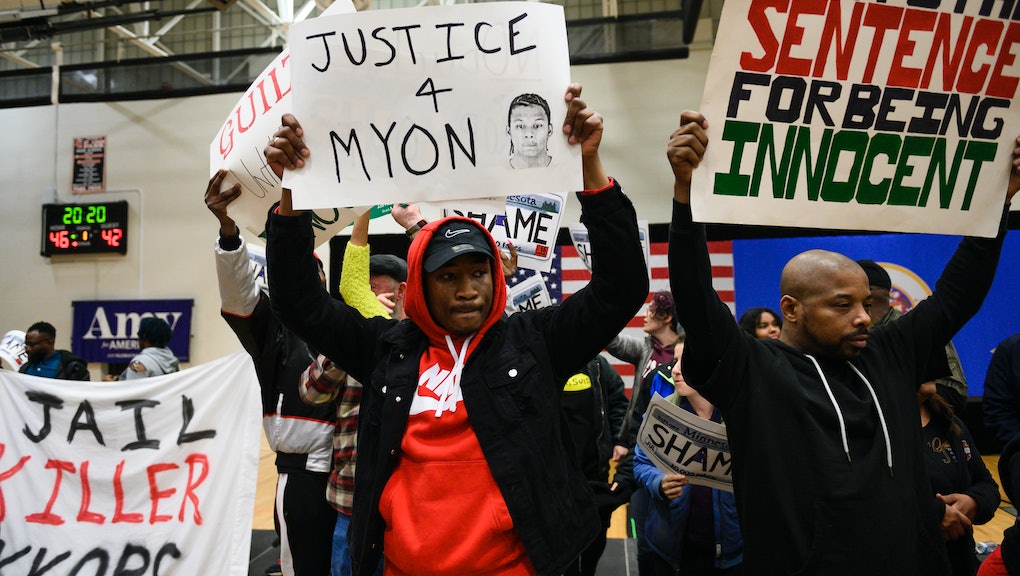 For two decades, a man sentenced to life in prison when he was just a teenager has maintained his innocence. After months of public outcry and a comprehensive investigation by the Associated Press, legal teams dedicated to overturning wrongful convictions will take on Myon Burrell's case.

In 2002, Amy Klobuchar, then a prosecutor for Hennepin County, Minnesota, fought for the conviction of 16-year-old Burrell, a Black teen who had been accused of shooting and killing an 11-year-old girl. The shooting victim, Tyesha Edwards, was also Black, and at the time Klobuchar framed the prosecution as a form of justice for the county's Black community against senseless gun violence. Edwards was sitting at her kitchen table doing homework at the time of her killing.

Years later, as Klobuchar, now a Minnesota senator, began her campaign for the Democratic nomination for president, she touted Burrell's case as an example of her tough-on-crime record. At the same time, AP started an investigation into Burrell's case that would later reveal a rushed investigation and inconsistent eye-witness reports.

What AP found was that there was no concrete evidence supporting the allegation that Burrell had shot and killed Edwards, or that he had even been outside of her house when the shooting occurred. Klobuchar and her team did not have a gun, fingerprints, or DNA evidence to link Burrell to the crime, and yet they still pushed for a life sentence.

Nearly two decades later, Northwestern University’s Center on Wrongful Convictions and the Innocence Project will review the now-34-year-old Burrell's case. The move comes months after Klobuchar herself called for an independent review of her legal work, after facing scrutiny on the campaign trail for her leadership on the case.

Barry Scheck, one of the co-founders of the Innocence Project, told AP that the review of Burrell's case will "include consideration of excessive sentences as well as a review of guilt or innocence and the fairness of the trial." Scheck said that the central question is: "If we had known all of this at the time we charged the defendant, would we have arrested him in the first place?"

The failings of the judicial and criminal justice system that led a 16-year-old to be handed a life sentence go far beyond the Minnesota county's district attorney office. The AP report also found that many of the so-called "witnesses" who implicated Burrell were actually "jailhouse snitches" who had been promised reduced sentences by police investigators in exchange for their testimony. Since that time, many have reversed their claims, saying that they had been bribed or coerced into offering Burrell's name to detectives on the case.

Burrell's life sentence was — and in many instances is still — a commonplace conviction for Black teens and young Black men in the 1990s and early 2000s. Politicians and policy wonks perpetuated the racist idea of "super-predators," supposedly young Black and brown teens believed to be predisposed to illegal activity. Though most politicians have since rejected the theory, in the '90s incarceration rates increased by over 100% in some states, a testament to the stereotype's impact. In Minnesota, incarceration rates increased by 50%.

While the overall incarceration rate might be decreasing now, young Black people are still disproportionately given life sentences, and are often treated as adults by the justice system even when they are younger than 18. Perry Moriearty, an associate professor at the University of Minnesota Law School, told AP that Black youth in Minnesota are eight times more likely than their white counterparts to be prosecuted as adults. Overall, Black youth are five times more likely than white youth to be incarcerated, according to the Sentencing Project.

Hennepin County is also where George Floyd was killed in May after Minneapolis police officer Derek Chauvin kneeled on his neck for nearly nine minutes, until he fell unconscious. The events, though decades apart, paint a picture of a region plagued by institutional racism. Chauvin has since been charged with murder for killing Floyd, but an initial city-sanctioned autopsy report declared that an underlying medical issue was the cause of Floyd's death, rather than acknowledge Chauvin's role. A second independent autopsy found that Floyd's death was a result of asphyxiation. Nekima Levy Armstrong, a civil rights attorney and founder of the Racial Justice Network, said of the disparate findings: "I think what this does is illustrates the corruption that exists within Hennepin County."

More like this
Nearly half of Asian Americans have experienced at least one racist incident, per a new survey
By Rafi Schwartz
South Carolina is about to bring back execution by firing squad
By Rafi Schwartz
Texts from Matt Gaetz's "wingman" allege that the congressman paid for sex with a 17-year-old
By Rafi Schwartz
Stay up to date