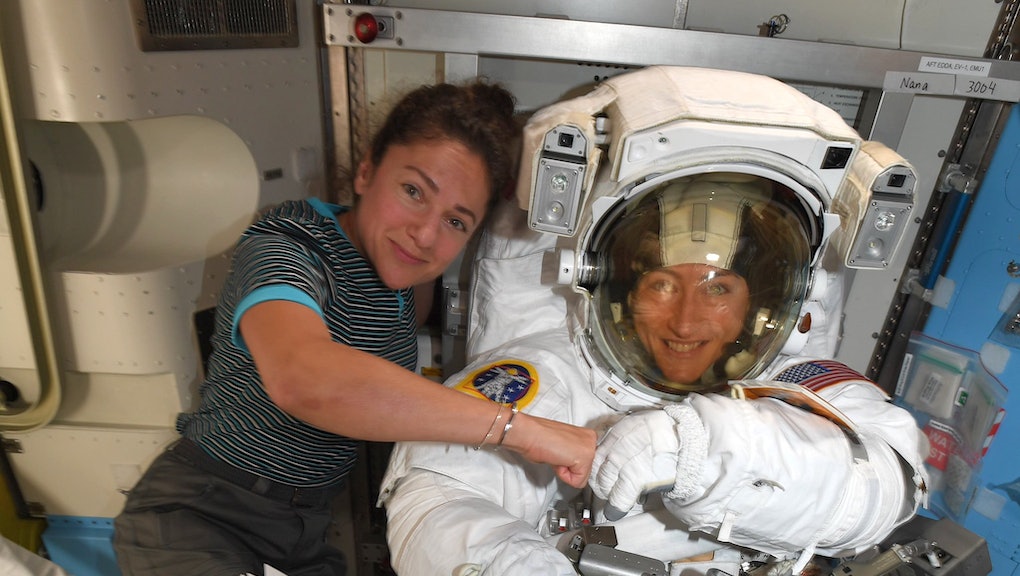 NASA’s all-women spacewalk is back on, following delay over spacesuits

Following a months-long delay, NASA's first all-women spacewalk is finally happening, and this time around, there's no bizarre reason like ill-fitting spacesuits to keep it from getting off the ground. The spacewalk was originally supposed to have happened back in March. However, it ended up being canceled in its original form, as two properly fitted spacesuits weren't available at the time.

Astronauts Christina Koch and Anne McClain were famously selected to take on the mission, but only one of them was able to participate. Both astronauts needed the same size spacesuit, and with only one available, the all-female walk was pushed back to a later date.

Instead, Christina Koch set out to complete the six-hour mission with astronaut Nick Hague. Anne McClain returned to Earth in June, but her activities in space came under public scrutiny after being accused of allegedly committing identity theft and improperly accessing financial records by her estranged spouse Summer Worden.

Now, another astronaut has been selected to walk alongside Koch. On October 21, Jessica Meir is set to join Koch on the first women-only trip past the bounds of the International Space Station. The pair have been tasked with installing lithium-ion batteries to ensure the power supply at the station is in prime condition. This particular mission will be the fourth of 10 spacewalks that have been scheduled over the next three months, with several other tasks planned to upgrade the space station's power systems. Other missions throughout November and December are meant to help repair the alpha magnetic spectrometer.

"I think it’s important because of the historical nature of what we’re doing and in the past, women haven’t always been at the table," Koch told NASA TV. "And it’s wonderful to be contributing to the human spaceflight program at a time when all contributions are being accepted."

Koch arrived on the space station in March, and is also hurtling toward a record-setting longest single spaceflight by a woman. This would put her out in front of Peggy Whitson, who just took the honor in April 2019.

"It’s an honor to follow in Peggy’s footsteps,” Koch said. “I hope that me being up here and giving my best every day is a way for me to say thank you to people like her, who not only paved the way through their examples, but actively reached out to make sure we could be successful." While Koch has been on the station for over six months, Meir only arrived in September.

"What we’re doing now shows all of the work that went in for the decades prior, all of the women that worked to get us where we are today," said Meir of the impending mission, also noting that the fact that there are two women on the space station total is "just normal," as they're "part of the team."

More like this
Scientists are potty-training cows in an effort to save the planet
By AJ Dellinger
Wind power is surging in the U.S., which means all sorts of good things
By AJ Dellinger
Biden's new office to fight for environmental justice already faces an uphill battle
By AJ Dellinger
Stay up to date