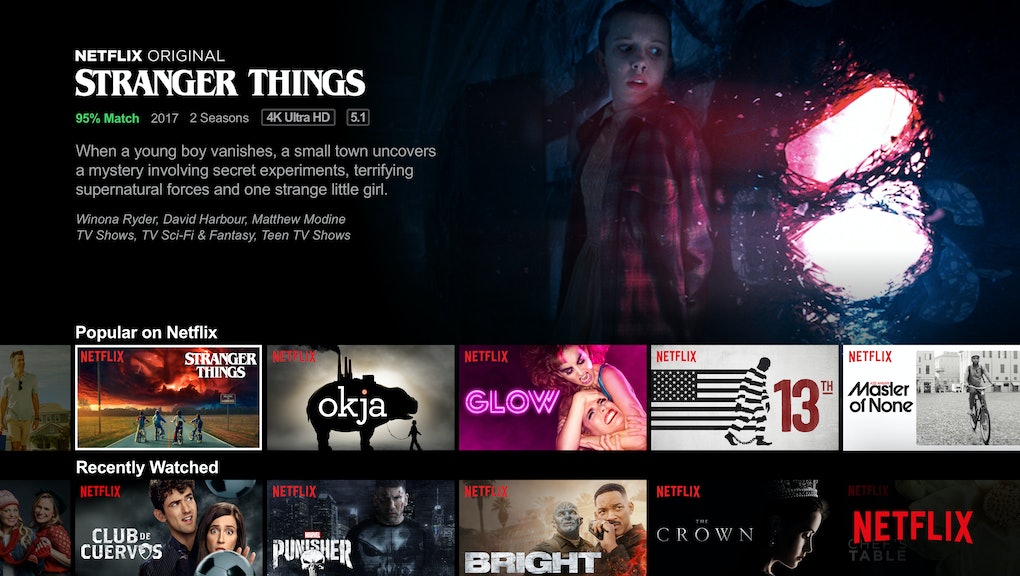 Netflix price hikes are still worth it as long as there are no commercials, survey finds

Netflix prices just keep going up. The company that started by offering streaming video and DVD rentals for just $8 per month now charges double that for its highest subscription tier. No one is thrilled about Netflix's price hikes, the latest of which bumped its standard subscription plan up by $2 per month back in May, but what's the alternative? Netflix could switch to an ad-supported model, but it turns out that may upset users more than any price hike would.

Decision Data surveyed more than 1,100 Netflix subscribers in the US about a hypothetical change in which Netflix ditches its current commercial-free streams and starts inserting advertisements during its shows. Nearly three-fourths of respondents said they'd rather just pay the higher price rather than deal with ad breaks. Just over one-in-four, 27 percent, strongly preferred paying the increased price to being served ads while 47 percent said they slightly preferred the higher subscription costs. Just 18 percent expressed any preference toward an ad-based model.

That doesn't mean people are exactly thrilled about Netflix's new prices, though. Decision Data found that 81 percent of people were at least somewhat unhappy with Netflix's recent decision to raise prices. Despite that, Netflix is extremely unlikely to pursue any sort of ad-supported model, much to the chagrin of the minority interested in subsidizing their subscription price with commercials. In 2015, Netflix CEO Reed Hastings said pretty definitively that there would be "No advertising coming onto Netflix. Period."

Netflix has gotten into the habit of tacking on a buck or two to its subscription price every other year. The company increased its standard plan from $7.99 to $8.99 in May 2014, then added another buck to bring the cost to $9.99 in October 2015. Two years later in October 2017, it bumped the price up another buck to $10.99 while introducing a pricier premium subscriber level priced at $13.99. Earlier this year, Netflix added another $2 to both its standard and premium tiers, bringing the monthly costs to $12.99 and $15.99 respectively.

Netflix is still adding new subscribers regularly — it landed 9.6 million new customers in the first quarter of 2019 alone, bringing it to just under 150 million subscribers globally. But it can't continue raising prices without expecting to see those numbers dip. There will be a breaking point, but according to a survey of Netflix subscribers conducted by investment bank Piper Jaffray, the company does still have some wiggle room. Nearly two-thirds of customers, 64 percent, said they wouldn't cancel Netflix until the cost of the standard subscription climbs above $15 per month. That basically falls in line with a recent poll conducted by Hollywood Reporter and Morning Consult that found most consumers view the "acceptable" price range for a streaming service to be between $10 and $16 per month.

Despite the apparent loyalty to Netflix from many customers, the streaming service has already started to see a drop off in subscribers among low-income households. Data from Earnin found that Netflix subscriptions have tapered off with each price jump while cheaper services like Hulu, which offers an ad-supported subscription option, have increased.

The resilience of Netflix's subscriber base will be tested soon. Disney's streaming service, Disney+, is set to launch this November for $6.99 per month — cheaper than any of Netflix's current subscription tiers. It will carry a huge library of Disney, Marvel, and Star Wars content that will make it a formidable competitor. Apple is also set to start offering original content through its Apple TV+ service later this year, though the price remains unknown for the time being. The emergence of those platforms may be a bigger threat to Netflix's dominance than any price hike.