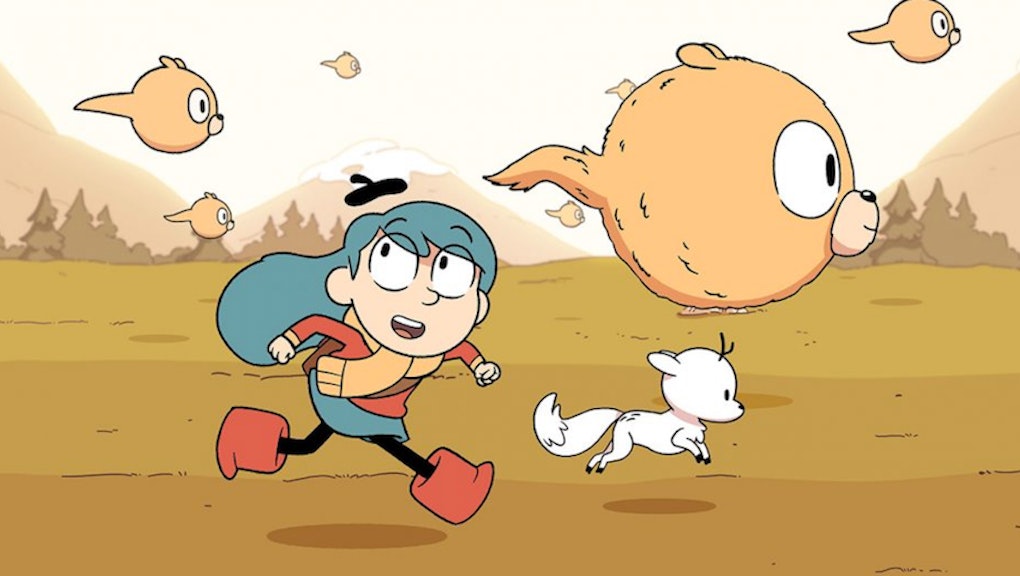 When animated series Hilda hit Netflix in 2018, it escaped many viewers’ notice. Season two, released in December 2020, has also flown under the radar due to scant marketing efforts from the streaming giant. Yet this cartoon about a blue-haired girl’s adventures through her whimsical world of mythical creatures and surreal landscapes is a hidden gem. Hilda embodies the Danish concept of hygge — a quality or feeling of contentment and comfort — inviting viewers into a story that is offbeat, heartfelt, and, above all, cozy.

But for all its fantasy and charm, the series is also relevant. Though Hilda offers viewers a magical alternate reality to explore, the show’s universe isn’t immune from the problems that also plague our own reality, like climate change and overreaching police. Just like the young people leading movements for climate justice and against police brutality IRL, Hilda isn’t afraid to resort to guerrilla tactics to protect the nature around her. In Hilda’s second season, the stakes are higher, the animation is more breathtaking, and, in 2021, the series’ environmentalist themes strike a chord.

The show, based on graphic novels by British cartoonist Luke Pearson, follows 11-year-old protagonist Hilda (Bella Ramsey, who also portrayed fan favorite Lyanna Mormont on Game of Thrones) and her deerfox, Twig, on their daily misadventures. In the first season, Hilda moves from the country to the walled city of Trolberg after a giant accidentally crushes her house. She initially struggles to adjust to life in the metropolis, which she deems “loud and crowded.” While living in the wilderness, she was no stranger to trolls and spirits, but she rarely interacted with humans besides her mom, Johanna (Daisy Haggard).

Her first night in her new home, Hilda laments, “You can barely see the sky, the trees are too small for climbing, and they built a wall to keep out anything interesting.” But Hilda often sees that which is invisible or banal to the adult eye — like marra, nisse, and other creatures inspired by Scandanavian folklore. Over time, she learns that even in the city, there is nature and magic all around. She also develops meaningful friendships with her classmates, overachieving Frida (Ameerah Falzon-Ojo) and timid David (Oliver Nelson), as well as Alfur the elf (Rasmus Hardiker), who, like the rest of his species, loves paperwork.

In season two, Hilda is confident in her relationships, more familiar with her surroundings, and eager to continue exploring the city. But as series head writer and co-executive producer Stephanie Simpson pointed out in a New York Comic Con roundtable, Hilda continues to be more wary of other people than she is of trolls and wild creatures. And she’s right to be. As in our own world, in Hilda, human adults — particularly those with power — are the greatest threats to the environment and themselves.

Like real-life youth climate activists, Hilda and her friends frequently take matters into their own hands, fixing adult mistakes and sabotaging grown-up plans to disrupt the natural life in and around the city. In the season one episode, “Sparrow Scouts,” the children hop a fence after dark to save hibernating vittra — turnip-like spirits — from an industrial mulching machine. Later in the first season, they face meteorologist Victoria Van Gale, who stole a baby Weather Spirit in an exploitative attempt to control the elements for human use. Hilda and David foil Victoria’s plans after discovering her intentions — but the meteorologist returns in a season two episode inspired by Disney’s 1937 short film The Old Mill, and, much like repeat climate offenders in the real world, it’s clear she hasn’t learned her lesson to leave nature alone.

Hilda is a gentle show, but as the aforementioned scenes make clear, the series’ writers, including Pearson himself, prioritize righteous fights over mindless rule-following in the stories they craft. This is more evident than ever in the second season, as Hilda encounters her first true foe: Chief of Safety Patrol Erik Ahlberg (John Hopkins), a blowhard intent on raising his public profile, regardless of the ecological cost. In the name of “securing the city’s borders” (sound familiar?), Ahlberg attempts to fill in the vittra tunnels underneath Trolberg’s walls and automate the city’s rarely-used bells to ring incessantly. The constant noise disturbs the elves and trolls, annoys the humans, and even awakens a kraken in Trolberg’s harbor. Hilda works to destroy the machine, with the help of her friends and a bell keeper whose job was made obsolete by the new technology.

The writers’ choice to introduce an incompetent but self-important policeman as Hilda’s main antagonist — and the face of environmental destruction — feels pointed, as does our protagonist’s guerrilla response. Like young climate activists today, Hilda’s sense of justice — rather than arbitrary and, at-times harmful, laws — guides her actions, and she refuses to respect authority when that authority is undeserved.

As quietly radical as Hilda is, it’s also just a joy to watch. The series retains the graphic novels’ soft style and gorgeous color scheme of muted teals, burnt reds, and olive greens. And — like fellow animated Netflix series Kipo and the Age of Wonderbeasts — Hilda boasts one of the best soundtracks in contemporary animation, with a theme song by Grimes and contributions by artists like Orville Peck, Dan Deacon, Frankie Cosmos, Kishi Bashi, and Stereolab. Ramsey herself even wrote and performed a song for the show, which plays during the end credits of a season two episode.

The show is at once melancholy and lighthearted; its spirit and tone exist somewhere between Lord of the Rings, Adventure Time, and a Studio Ghibli film. Ramsey leans into her role as strong-willed, well-intentioned Hilda, while voice actors like Ako Mitchell (as Hilda’s esoteric neighbor Wood Man) and Andy Serkis (as yule lad Kertasníkir) bring obscure creatures from Scandanavian lore to life. The series’ cast of characters are diverse. People (and elves) of all races, nationalities, and abilities live in Trolberg; there are citizens depicted wearing hijabs and turbans; and viewers will hear many different accents throughout the show’s two seasons. Hilda even received praise from the American Library Association for its positive, mold-breaking portrayal of Trolberg’s librarian, Kaisa (Kaisa Hammarlund), a young, queer-coded steward of knowledge who also happens to be a witch. As journalist Rafael Motamayor wrote last summer in Nerdist, we’re currently in a “golden age of fantasy animation.” Hilda is proof of that notion.

In a time marked by fear and tedium, Hilda offers viewers a welcome escape and holds up a mirror (albeit a rosy one) to some of our society’s biggest issues. While we may currently be stuck at home, Hilda reminds us that there’s a great big world full of wonder and mystery outside our quarantine bubbles — and we need to act to protect it.