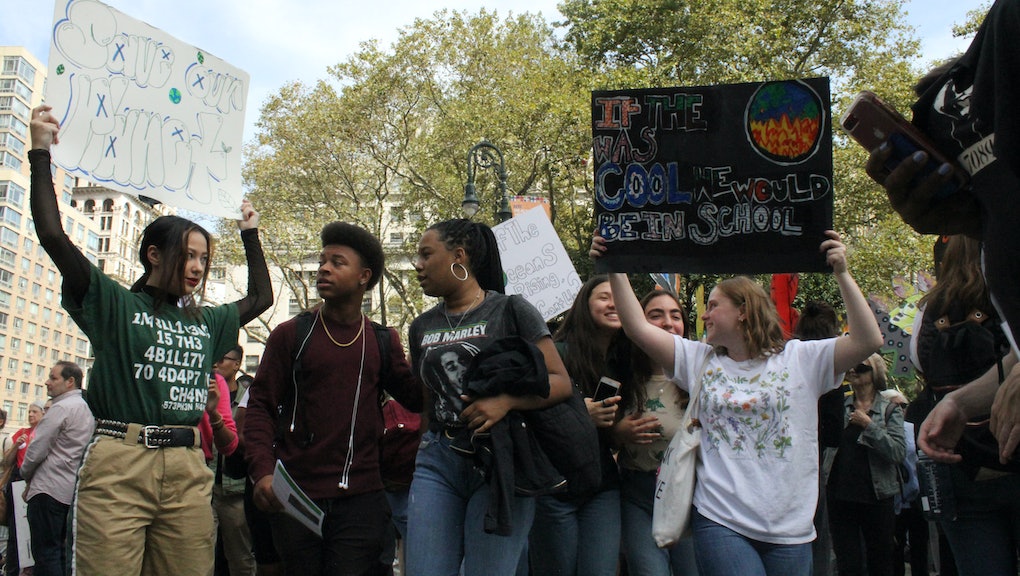 Five thousand events. One hundred and fifty-six countries. All seven continents. Between Sept. 20 and Sept. 27, there will be 5,225 demonstrations worldwide for the Global Climate Strike. Children, teens, and young adults will lead the way in demanding world leaders to act immediately and urgently towards addressing the climate crisis. Kids in the Solomon Islands showed up to strike by boat; in Sydney, more than 300,000 people flooded the streets. Similar scenes of protest could be found in India, Poland, and Germany.

In New York City, hundreds of thousands of teens and children gathered in Lower Manhattan. The city gave public school students students a pardon from classes if they were attending the strike, and some teachers offered extra credit for selfies from the event.

Police had to extend the barriers so that more people could fit inside the parameters of the rally twice. Chants like, “Hey hey ho, fossil fuels have got to go!” and “What do we want? Climate justice! When do we want it? Now!” echoed back and forth, and children as young as six years old carted their own signs.

In New York and beyond, those, these kids aren’t just striking for an ambiguous “end” to climate change. They’ve got a specific list of demands they’re asking for, and they’re serious about them.

“I hope that we strike with the whole world and the United States, and we shut down business as usual to send a clear message to fossil fuel billionaires and corrupt politicians that we need a Green New Deal,” Rose Strauss, an organizer with the Sunrise Movement, told Mic before the strike in New York City. “The Green New Deal is the solution we need to solve the climate crisis.”

The Sunrise Movement has been working on climate issues for some time, but the group was thrust into the public consciousness earlier this year when its members protested with New York Rep. Alexandria Ocasio-Cortez in support of the Green New Deal — an ambitious piece of proposed legislation that aims to address climate and social injustice through a series of economic and systemic reforms. The Sunrise Movement was also behind the push for a Democratic presidential debate focused specifically on climate change; while the group was unsuccessful in persuading the Democratic National Committee, their efforts did result in a seven-hour climate town hall moderated by CNN.

But for all its obvious momentum, there are still people who don’t take the youth climate movement seriously. The 16-year-old Greta Thunberg, who has become one of the most well-known individuals within the movement, has faced criticism and harassment from adults who are uncomfortable with her attitude, her age, or her ability to fearlessly demand more from her leaders. Plenty of adults — oftentimes prominent and powerful ones — have tried to discredit youth activists as too young, too entitled, and too idealistic to ever accomplish anything.

Yet at the strike, kids were perfectly articulate about what they wanted: a Green New Deal, a compassionate president who actually believes in climate change, a just and equitable future they can look forward to. Damilola, 16, said Friday that she wonders what the point of going to school is when her future is not guaranteed. “Between school shootings and climate change, I’m going to meet Jesus before I get my first kiss,” she said.

All of Damilola’s friends laughed at her answer — but she was serious. “I don’t understand why the government and corporations don’t find solutions,” she said. “Like, do you want your children to suffer?”

Meanwhile, adult climate experts are grateful — and unsurprised — that the most powerful advocacy has come from the younger generation. Robert Friedman, an environmental justice policy advocate at the National Resource Defense Council, believes that the youth climate movement has in fact redefined the way people talk about climate change altogether: Mainstream messaging is no longer about saving trees or recycling, but instead about intersectional justice. Friedman told Mic that based on history, it’s fitting that we’re seeing activism and leadership rise from the youth.

“Young people have been at the vanguard and forefront of social justice movements forever, honestly, and this is another [example] of young people using their moral authority to demonstrate leadership,” Friedman said. “Young people alive today ... are going to be living with this crisis.”

Katie Eder, 19, is taking a year off between high school and college to work full-time for Future Coalition, a youth-led organization that focuses on social change. Eder told Mic that adults trying to discredit young people doing work in the climate justice movement is unproductive — and “kind of uncool.”

It’s foolish for adults to “[say] ‘Oh, they're too young, they don't know what they're talking about, they haven't had enough experience,’” Eder says, “when in fact that is what gives us such a strong ability to bring about change ... the fact that we haven't had as much experience and we don't see necessarily all the obstacles. We see a problem, and we see solutions, and we see a path towards solutions rather than thinking of the challenges that we're going to face to get there.”

This kind of optimism can be found throughout the youth climate movement, but it isn’t a natural reaction. It takes continued effort to not feel overcome by the massive amount of work there is to be done, especially when the stakes couldn’t be any higher. Eder said that to combat despair, Future Coalition held a retreat where young people were given the space to talk about their fears in a constructive way.

“This concept is called ‘environmental melancholy,’ and essentially what it means is that the fear of the destruction of our world because of the climate crisis is so intense that people often feel completely overwhelmed by it and completely paralyzed,” Eder explained. “So how do you balance getting people to comprehend the scale and scope of the issue while ensuring that it's not so overwhelming that people are too paralyzed to do anything about it?”

That sentiment was repeated by many of these young activists: Yes we’re afraid, yes we’re angry, but we’re not going to let what we’re afraid of stop us from doing something about it.

“We know that the odds are against us, and we know that people in power are working every single day to try to stop us from having a livable future. But ... we refuse to be the last generation of human civilization,” said Strauss, the Sunrise Movement organizer. “We will not stand by while the future is destroyed.”

As the temperature rose in New York on Friday, the energy seemed to rise with it. Chants turned a bit more pointed, too. “Fuck Donald Trump! Fuck Donald Trump!” one group shouted as they all began their march down to Battery Park, at the southern tip of Manhattan. Phrases like “socialism,” “clean energy,” and “corporate responsibility” were being fluently discussed between the young activists, some of whom were still wearing braces.

“Whether it's the civil rights movement, the labor movement, or the environmental justice movement, it's always been led by young people,” Friedman said. “Young people have a unique ability to point out what is wrong and to speak truth to power. And I'm so grateful to these young people for their idealism, because it is their idealism that is actually supercharging the conversation around ... climate justice.”

Even the youths who were most scared and skeptical about the future weren’t ready to give up on the fight for it. While some were frustrated that they had to beg for change in the first place, on the whole the activists who gathered Friday in New York were mostly interested in getting something done.

More like this
Bernie Sanders simply does not care about your archaic Senate rules
By AJ Dellinger
Amid daily reports of catastrophe, Americans are finally starting to realize climate change is bad
By AJ Dellinger
This is what it looks like when a city floods in real-time
By AJ Dellinger
Stay up to date