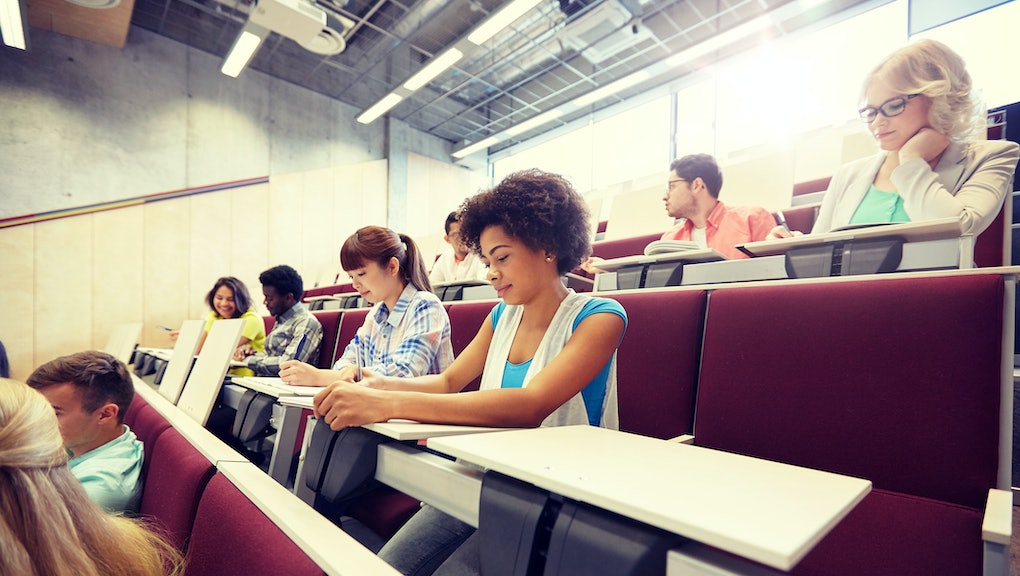 If you’re a New Mexico high school student with college ambitions, your future may have just gotten a lot less expensive. On Wednesday, New Mexico Gov. Michelle Lujan Grisham (D) announced a plan to eliminate tuition at all of the state’s colleges.

"We're going to deliver a major boost. F-R-E-E," Lujan Grisham said, speaking to a crowd at an education event at Central New Mexico Community College. "It's been a really long time since I crossed the stage for my diploma at the University of New Mexico, but ... I still know what F-R-E-E spells and I also know that free college for New Mexico students is the right thing to do."

The proposal still has to be approved by the state’s legislature, which is controlled by Democrats. But if it is, then the state would cover tuition for the 55,000 New Mexicans attending the state’s 29 public colleges and universities in the fall of 2020.

New Mexico’s plan will be paid for with money that’s been flowing into state coffers from oil drilling in the Permian Basin, home to large oil fields on the Texas border. Tuition for in-state students at the University of New Mexico is $7,556; the plan is expected to cost the state government between $25 and $35 million per year.

Lujan Grisham hopes that free tuition will encourage bright students to stay in the state, which is one of the poorest in the country, rather than go elsewhere higher education. The median family income in New Mexico is $46,744, as opposed to the national median of $60,336.

While Democratic presidential candidates including Sens. Bernie Sanders and Elizabeth Warren have proposed free college at the federal level, states have so far led the charge on tuition reform. In 2017, New York became the first state to eliminate tuition at both two- and four-year colleges under its Excelsior plan, aimed at expanding college access for middle-class students. In all, 17 states now offer some form of free tuition at public colleges for certain students.

But unlike those plans, New Mexico’s plan won’t just apply to low-income students. State college will be free for everyone at every school, period.

Some higher education experts believe that tuition money in plans like New Mexico’s would be better spent specifically on low-income students. “While the proposed free tuition plan makes a broad commitment to creating a college-going culture throughout New Mexico, it does not target aid in ways that would maximize college affordability for the students who most need the financial support,” said Mamie Voight, vice president of policy research at the Institute for Higher Education Policy, an nonpartisan organization dedicated to improving access to higher education for underserved communities..

“The proposal could be strengthened by targeting limited state resources to better serve the students who face the greatest financial barriers to college access and success: students of low- and moderate-income,” Voight added.

Voight explained that “free tuition” isn’t the same as “free college,” as tuition is only one in a series of costs required to send a student to school. Other financial burdens, like housing, books, and food, are often left uncovered by the trendy free-college proposals cropping up across the country.

“Our research demonstrates that non-tuition costs … are often the biggest expenses students must cover — and those expenses comprise the bulk of unmet need,” Voight said. “When faced with enormous expenses beyond tuition, students of low-income often must make difficult tradeoffs, including working long hours, forgoing meals, and taking pauses between semesters to be able to afford the next set of college expenses.”

In other words: Tuition-free college is a good start, but it may not be solving the most truly pressing need. And with a proposal like New Mexico’s, which extends to everyone, it’s worth exploring how exactly to best solve the student debt crisis that has plagued a generation of Americans.

In the meantime, though, New Mexico does deserve some praise for making a bold move on the power of state authority, rather than waiting for the federal government to come to the rescue. As Voight said: “The New Mexico plan is a step in the right direction toward promoting increased access to higher education.”