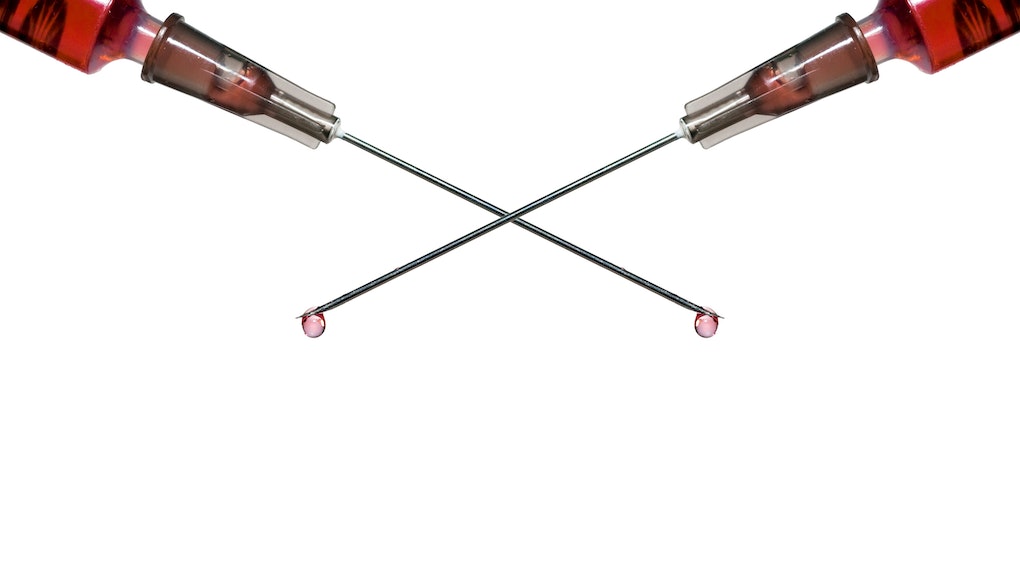 New research explains why anti-vaxxers think the way they do

The race to find a vaccine for the novel coronavirus is bringing up a lot of conversation about vaccinations in general — and of course, hesitation from anti-vaxxers. If you’ve ever found yourself debating an anti-vaxxer about the necessity and efficacy of vaccines, you may have wondered why they refuse to vaccinate themselves or their children when the preventative measure has been broadly proven to be medically sound. Their argument — that vaccines are dangerous — seem flimsy at best.

New research shows that anti-vaxxers are possibly, by nature, anti-a-lot-of-other-things that seem fairly safe too. Fearing unwarranted occurrences might just be built into their personalities. According to a small but revelatory study released yesterday in the journal Vaccine, anti-vaxxers may just think differently.

The study, which was conducted at the Texas Tech University, surveyed 158 participants in two experiments. In the first, researchers asked participants to rate the likelihood of mortality-related events (a.k.a. situations that could cause death). Of course anti-vaxxers would think that vaccine-related death or injury are likely, but, what researchers found was that the same participants also overestimate the possibility of death by things like fireworks and flooding.

Anti-vaxxers, then in theory, could have a sort of a Murphy’s Law approach, not just to vaccines, but to everything. Put reductively, they might have a tendency to think that if something can kill you, there’s a decent chance it will.

In the second experiment, the same people were asked to rate the likelihood of neutral or positive events. Researchers found that people who are skeptical of vaccines are more accurate in positive or neutral calculations than in negative ones. One could glean from that, that anti-vaxxers tend to overestimate the likelihood of negative events — but not positive or neutral ones. "My takeaway is that vaccine skeptics probably don't have the best understanding of how likely or probable different events are," Mark LaCour, a Ph.D. candidate in psychological sciences at Texas Tech and co-author of the study, told EurekAlert. Yikes. This makes sense.

Anti-vaxxers, then in theory, could have a sort of a Murphy’s Law approach, not just to vaccines, but to everything.

The first inclination — if you are one of the people perplexed by anti-vaxxers — is to assume they just don't understand how vaccinations work. But these findings show that some people’s fear of vaccines’ minimal risk is not about lack of education. Instead, they theorize that it is more likely that anti-vaxxers generally have more of an attention span for things that aren’t likely to hurt you but still have a sliver of a chance to.

"It may be the case that they are specifically seeking out biased information to confirm their skeptical beliefs," Tyler Davis, an associate professor in psychological sciences at Texas Tech and co-author of the research told EurekAlert. "Or it could be that they have more of an attentional bias to negative, mortality-related events.”

So it’s not that your anti-vaxxer friends aren’t listening to your pro-vaccine rants or that they don’t read credible articles advocating the necessity for cheap and easy virus protection. Davis says that, because anti-vaxxers aren’t notably less educated than other folks, strategies like these just may not change their minds. They see and hear the same facts that we all do; they just interpret them differently.

Anti-vaxxers might be more likely to believe the doomsday prophets on social media who appeal to their negative orientation than hopeful research, LaCour told EurekAlert. Finding this cognitive explanation that helps explain vaccine skepticism could be the first step towards understanding how to reach people who may choose to opt out of vaccination and put their communities lives in danger. Fingers crossed we figure this out by the time we get that COVID-19 vaccine.

More like this
Uncontrollable, weed-induced vomiting is on the rise, according to new research
By Tracey Anne Duncan
Anti-vaxxers have finally incurred the wrath of the celebs
By Kara Weisenstein
Delta might be the last COVID nightmare variant we get
By Ian Kumamoto
Stay up to date