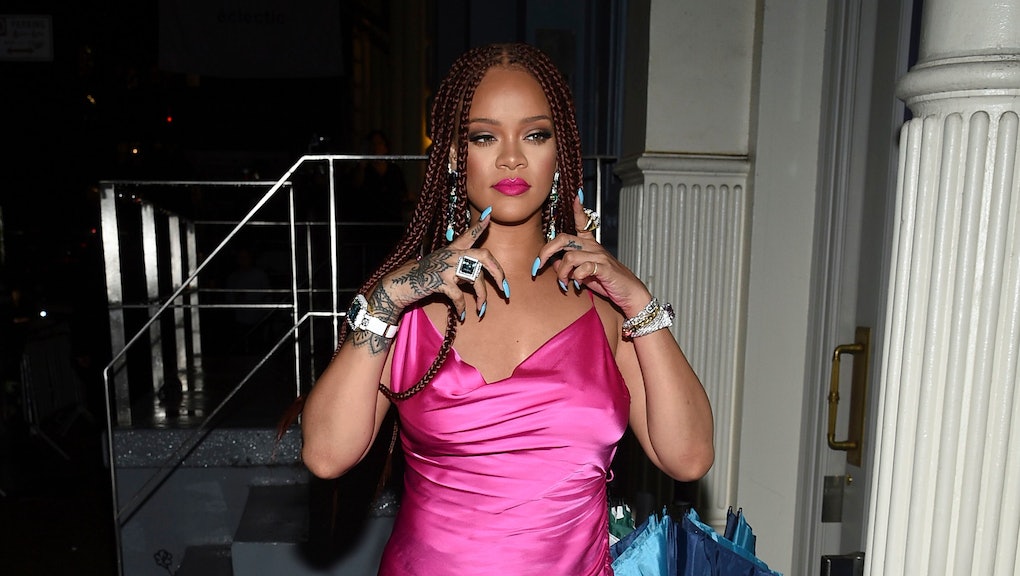 New Rihanna music is on the way, even if the singer's new T-shirts say otherwise

Rihanna, reigning goddess of music, makeup, fashion, and more, is mastering a new trade: the art of the troll. For many months, loyal fans have been begging for new Rihanna music to accompany the star's highlighter drops and lingerie designs. And for many months, she's used her Instagram comment section to tell us to be patient. But now, she's just laughing at us, as shown by the "No More Music" shirts being sold in her clothing line.

The Fader reports that during a June 18 pop-up event for Rihanna's new Fenty line in New York City, some of the merchandise available seemed to be particularly aimed at the unrelenting fans hoping for new songs — namely shirts emblazoned with the words "No More Music." Not only did these items suggest a nightmare scenario for fans, they also weren't cheap, selling for $230 each. But people happily bought them despite the price and mocking message, which really is proof that Rihanna has reached new levels of messing with her audience.

Although the shirts were only on display at the pop-up's Soho location, they're now available to be purchased on Fenty's online store if you, too, want to tell the world that Rihanna's making fun of you. Hey, the shirts are cute.

Of course, the "No More Music" message is meant to be a joke, as over the last few months, Rihanna has posted Instagram stories from the studio and has repeatedly told reporters that she does in fact, have new work on the way. The singer's close friend, Jennifer Rosales even posted a photo of her baby in the studio to Instagram in March, with the caption: "When tia @badgalriri gives you the first listen 😎. #newmusic"

Not too much is known yet about the upcoming songs, unfortunately. In May of 2018, Rihanna told Vogue that she was working on a reggae-inspired album, though she didn't give specifics on a release date or anything else. More recently, she told T Magazine in May that she doesn't know when the album will be released, but that it is a reggae record and definitely won't include features from Drake and Lady Gaga.

In a June interview with Interview, Rihanna revealed that she's not in any hurry to get the album out to fans, although she understands the impatience. “It really does suck that it can’t just come out, because I’m working on a really fun one right now," she told Interview. "I’m really happy with a lot of the material we have so far, but I am not going to put it out until it’s complete. It makes no sense to rush it, but I want it out. I’ve gotten to the point where I’m like, 'Even if I don’t have the time to shoot videos, I’m going to put an album out.'"

Many people suspect that the album will be released sometime in late 2019, but with Rihanna's busy schedule and many endeavors, there's no guarantee. She did tell Interview that she's rented out studio space for a month, which is promising, but whether that means the album will be completed this summer is unknown. Until then, listen to Anti on repeat and try not to take Rihanna's "No More Music" message to heart.