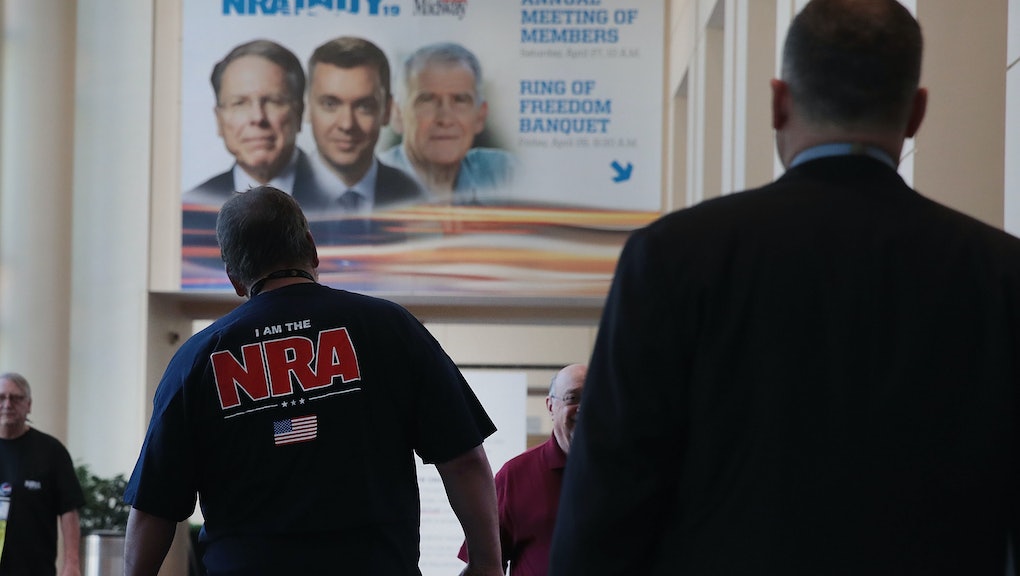 New York Attorney General Letitia James announced Thursday that she has filed a lawsuit against the National Rifle Association, accusing the organization of longstanding financial mismanagement and criminal conduct and vowing to dissolve the nation's most ubiquitous and powerful gun lobby entirely.

According to James, the NRA has spent "years" engaged in "self-dealing and illegal conduct" for the benefit of its senior leadership, including Chief Executive Wayne LaPierre, who last year was accused of lavish personal spending at the group's expense. The spending was exposed during a contentious intra-organizational struggle between LaPierre, former Board Chair (and erstwhile convicted felon) Oliver North, and the group's former advertising firm Ackerman McQueen.

James's lawsuit alleges the NRA's financial misconduct cost the powerful lobby approximately $64 million over the course of around three years, and specifically names LaPierre, general counsel John Frazer, former CFO Woody Phillips, and former chief of staff Joshua Powell as co-defendants along with the organization itself.

According to a summary of the lawsuit provided by the attorney general's office, the charges leveled against the group's executives include allegations of dramatic overspending and financial misappropriation, including:

[LaPierre] visited the Bahamas by private air charter at least eight times in an approximate three-year period with his family, at a cost of more than $500,000 to the NRA. On many of those trips, LaPierre and his family were gifted the use of a 107-foot yacht owned by an NRA vendor.

[LaPierre] secured a post-employment contract for himself with the NRA, without board approval, currently valued at more than $17 million.

Just before his retirement in 2018, Phillips obtained a contract for himself worth $1.8 million, purportedly for monthly consulting services to the incoming treasurer, even though the current treasurer knew nothing about this contract and has confirmed that "Woody [Phillips] never consulted for me."

A little over two years into the job, Powell’s salary more than tripled from the original $250,000 to $800,000, despite numerous complaints of abusive behavior and evidence of illegal conduct and inappropriate spending.

Although the NRA is headquartered in Fairfax, Virginia, the lobby was chartered in New York, putting it under James's legal purview. In seeking to fully dissolve the nearly century-and-a-half old group, James has taken the strongest course of action against the organization.

In addition to pursuing the group's dissolution, James also demands the defendants pay back the funds they allegedly misappropriated, and that they would be barred from serving on any charitable boards in New York State ever again.

"The NRA’s influence has been so powerful that the organization went unchecked for decades while top executives funneled millions into their own pockets,” James said in a statement. “The NRA is fraught with fraud and abuse, which is why, today, we seek to dissolve the NRA, because no organization is above the law."

When notified of the AG’s lawsuit, President Donald Trump on Thursday encouraged the NRA to simply relocate to Texas where, he claimed, the gun lobby could “lead a very good and beautiful life”