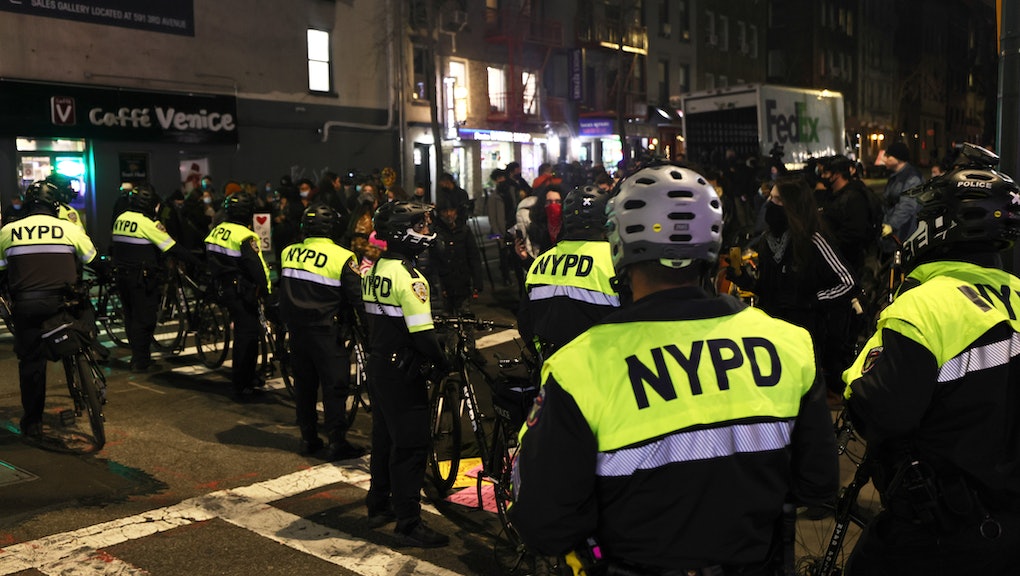 New York City investigated the NYPD after the George Floyd protests, and the findings are ugly

Following the Memorial Day police killing of George Floyd in Minneapolis, cities nationwide ignited in protest. Throughout the summer, protesters were met with physical violence from police, but also violence in the forms of chemical irritants like mace and "less-than-lethal" weapons. And now, a watchdog report has confirmed what protesters in one major city already know: that the New York Police Department's response to protests included "unjustified excessive force" alongside a slew of other issues.

On Friday, the city's Department of Investigation released its 115-page report on NYPD's response to the Floyd protests. The report stated that NYPD officers were undertrained and unprepared and that their actions often contributed to or escalated tension. The report found police's reliance on certain crowd-control tactics "produced excessive enforcement" and signaled out the department's use of "kettling".

Kettling involves police forming walls and basically trapping protesters into alleys, on sidewalks, and in other areas. The Human Rights Watch reported on a June incident where the NYPD utilized kettling in a low-income neighborhood in the South Bronx, trapping them in place until the city's 8 p.m. curfew went into effect. Then, the HRW report said, "police moved in on the protesters, unprovoked and without warning, whaling their batons, beating people from car tops, shoving them down to the ground, and firing pepper spray in their faces."

Overall, the Department of Investigation's report criticized the city for "lack[ing] a clearly defined strategy tailored to respond to the large-scale protests of police and policing." It also said "some police officers engaged in actions that were, at a minimum, unprofessional and, at worst, unjustified excessive force or abuse of authority."

However, the report noted that the issue extended beyond individual officers. It went on to add that the police department "itself made a number of key errors or omissions that likely escalated tensions, and certainly contributed to both the perception and the reality that the department was suppressing rather than facilitating lawful First Amendment assembly and expression."

In response to the report, New York City Mayor Bill de Blasio (D) released a videotaped statement on Twitter. "I read this report and I agree with it," he said. "It makes very clear we've got to do something different, and we've got to do something better. I look back with remorse. I wish I had done better. I want everyone to understand that. And I'm sorry I didn't do better."

Unfortunately, de Blasio's statement is a little lackluster. While de Blasio expresses remorse now, he defended the NYPD after a video showed police driving their vehicles into protesters. While he called the video "upsetting," de Blaiso ultimately blamed the protesters for being run over. NBC News reported he said he "understood [police] didn't start the situation" and it was "started by a group of protesters converging on a police vehicle."

However, the report itself should not be seen as exposing anything new. The abuse of protesters over the summer was well-documented — by protesters themselves. Besides, the NYPD's violent tactics did not originate with mass protests in response to Floyd's murder. In fact, there is a long history of protests against policing in NYC, where protesters have been met with similar violence before.

Ironically, the report seems to ignore history and context in reviewing the NYPD's actions. For example, it notes that the NYPD used the same tactics and specialized units it would to combat terrorism. However, this is neither new nor surprising, and is in fact a function of policing. Historically, Black liberation movements have been classified as terroristic. This was seen most recently with the FBI's "Black Extremist Identity" category. The label of domestic terrorist has been used to justify the surveillance of and any violent action against Black communities and those who stand in solidarity with their movements.

Per The Wall Street Journal, NYPD Commissioner Dermot Shea acknowledged that “in general terms the report captured the difficult period that took place in May/June of 2020 and presents 20 logical and thoughtful recommendations that I intend to incorporate into our future policy and training." And perhaps this is the largest issue with the report: While condemning some police actions, it did not condemn policing as an inherently violent institution. In direct contrast to protesters' demands to defund and, ultimately, abolish police, the report frames the NYPD as a department that can be redeemed with more training, which would require money, resources — and perhaps most evasively, the will to do so.

More like this
The Chauvin trial is incapable of delivering real justice
By Vanessa Taylor
The DOJ will investigate the Minneapolis Police Department for "systemic policing issues"
By Rafi Schwartz
Daunte Wright would be alive "if he would've just complied," Minnesota police bigwig says
By Rafi Schwartz
Stay up to date