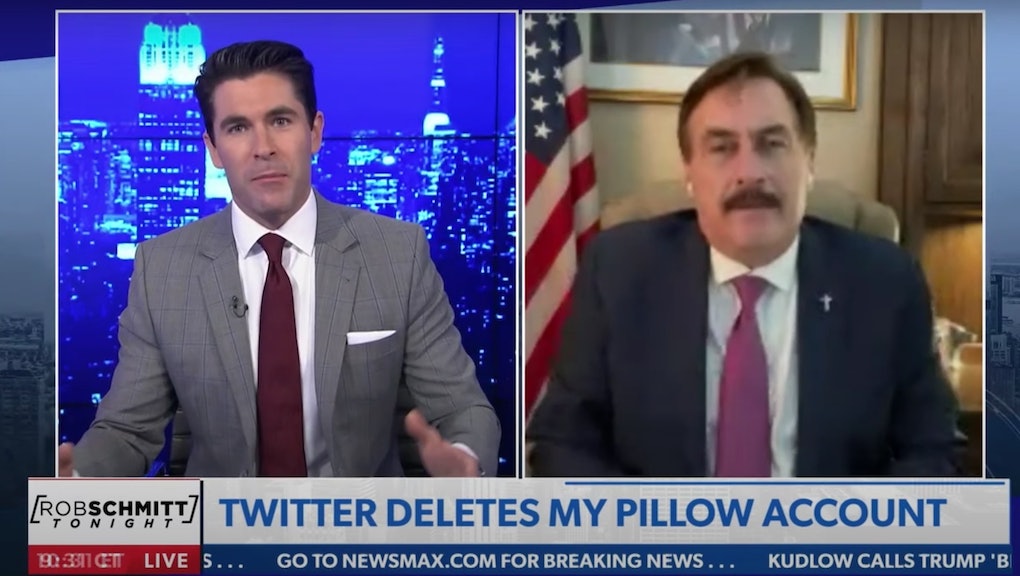 Let's talk about Newsmax. Specifically, let's talk about the incredible run the upstart ultra-ultra-conservative network has had over the past few days.

Newsmax, you might recall, is one of the larger outlets in the growing "we're gonna out-Fox Fox News" ecosystem of far-right propaganda outlets that former President Donald Trump endorses each time he gets mildly annoyed that Fox & Friends host Steve Doocy hasn't kissed his butt quite hard enough. But with Trump no longer in the White House, Newsmax has made the editorial decision to plow right ahead with their sycophantic coverage of all things MAGA — including seeking expert political insight from Mr. MyPillow himself, Mike Lindell. You may recall Lindell as the Minnesota businessman who insists he has "100% evidence" (what does that even mean? This phrase is meaningless) that Trump actually won the 2020 presidential election, only to have it stolen out from under him by a nefarious plot to hack Dominion brand voting machines.

This, of course, is total bullshit, not that that was enough to keep Newsmax's Bob Sellers and Heather Childress from inviting the clearly reality-adjacent Lindell onto their show this week. The segment was ostensibly to discuss "cancel culture" which, much like Lindell's repeatedly debunked election conspiracy theory, is also a thing that doesn't exist.

His appearance was not a smashing success.

You see, while Newsmax's hosts were hoping Lindell would talk about being booted off of Twitter (why that would make for interesting television, I don't know), the MyPillow mogul insisted on literally yelling about his nonsense voting machine investigation. The problem was, however, that Dominion had already threatened to sue Newsmax for airing those very same conspiracy theories, and scared the network so badly, that they issued a rare — and extremely hilarious — full walk-back of their earlier coverage. The network was so scared, in fact, that the moment Lindell began ranting about Dominion and voting machines and election fraud, Sellers began reciting that same walk-back live, on air, which he just so happened to have on hand for moments like these. How convenient!

It's hard to pin down my favorite moment in these two minutes of comedic brilliance. It might be at 0:24 when Sellers begins to realize things are headed south, and tries to cut Lindell off; it might be Lindell's weird serpentine tongue movements while Sellers reads his network's "please dear God don't sue us into oblivion" statement; it might be Childress's pained chuckle when Lindell stops screaming for a second and asks "... what?" when pushed about his actual reason for being on the show (which, again, was Twitter); it could very well be Sellers's plea to the production booth to "get out of here, please?". It's really an embarrassment of riches — and richly embarrassing for everyone involved.

Lest you think Newsmax somehow evolved something akin to a human spine, rest assured the network was eager to have Lindell back on air just a few hours later, where he was slightly less agitated and more willing to discuss being banned on Twitter, which, again, who cares?

The network's indignities continued apace Wednesday, when host Grant Stitchenfeld tried very hard to interview Texas Republican Rep. Brian Babin, only to suffer what could either be called a catastrophic technical failure, or simply an encounter with some sort of Lovecraftian horror beyond the limits of time and space. Decide for yourself:

Look: I know Newsmax is one of the bigger fish in the still-growing pond of gently fascist post-Trump outfits. But they're still relatively small potatoes compared to networks like Fox News and CNN. I would imagine that Newsmax is consequently hungry for the sort of viral moments that could help spread its name and reputation as a legitimate source of news and opinion to the broader media consuming world.

But if it were me, and these were my two major viral moments — one right after another — I'd start wondering whether the adage "no such thing as bad press" still applies.