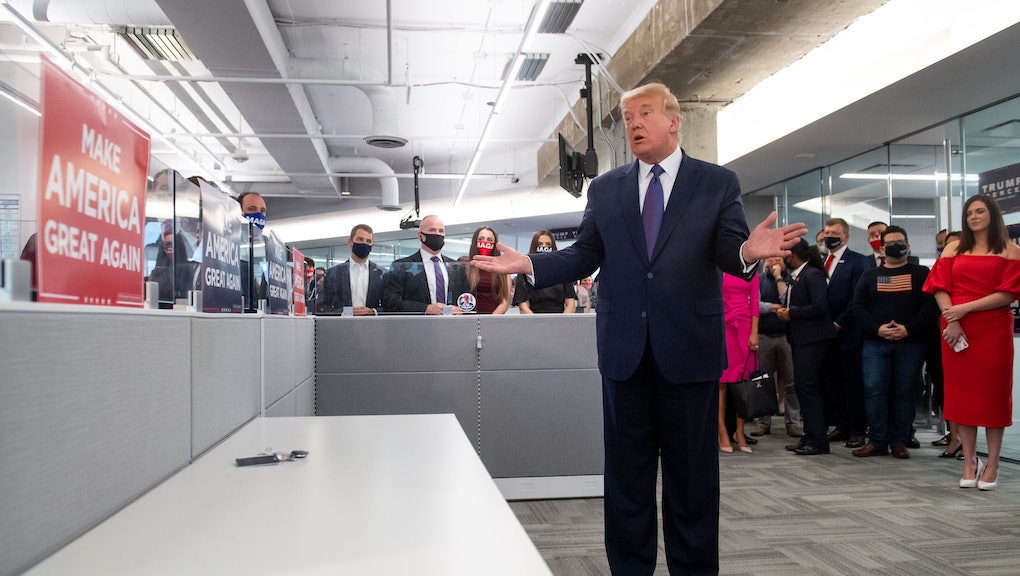 Like a dying bullfrog croaking its final gravelly "ribbit" as it topples off a lily pad and sinks slowly into the swampy muck, a dejected-sounding President Trump spent the morning of Election Day retreating to his safe space of Fox News for a decidedly downbeat peek into his political psyche.

"Fox has changed a lot," a haggard-sounding Trump said. "Somebody said, ‘What’s the biggest difference between this and four years ago?’ And I say, 'Fox.' It’s much different. You still have great people ... but Fox is a much different place in terms of politics."

While Trump — who, incidentally, was nearly an hour late for his scheduled call-in — has attacked Fox News before, his Tuesday morning blindside against the network prompted some uncharacteristically strident(-ish) pushback from the morning hosts. In response, Trump, perhaps realizing that it's a bad look for a guest to clog their hosts' metaphorical toilet with an excessive amount of BS while people are literally casting their votes, quickly pivoted back to his more characteristic fawning over the network's prime-time heavyweights.

"You have great people,” he continued. “When you have Sean [Hannity], and you have Laura [Ingraham], and, you know, yourselves, and you have some incredible people."

"I’m just saying, Tucker [Carlson]’s been great" he added, notably shouting out the network's cast of opinion-show hosts, rather than the anchors associated with the news side of things.

The interview, which also included a healthy dose of Trump's well-worn complaints against Joe Biden, Kamala Harris, Barack Obama, and the voting process itself, was hardly the sort of enthusiastic closing argument you might expect from a president who has gone out of his way to spend the past few weeks predicting a landslide re-election victory — although he did halfheartedly claim at one point that while "my number last time was 306," he expected "we'll get better" on Tuesday night, referring to votes from the Electoral College.

The interview ended with both Doocy and co-host Brian Kilmeade exclaiming "that was pretty awesome."

Incredibly, the Fox & Friends call was not the end of the president's Election Day downer. Speaking with campaign workers at his headquarters outside D.C., Trump continued to bang the drum sadly, lamenting to his supporters how hard it is for him, personally, to lose, before saying "it was an honor." While he nevertheless predicted a "great night," the tangents about the agony of defeat and his use of the past-tense "was" are hardly the stuff of the sort of rah-rah-rally-the-troops speech you'd expect to hear from someone confident about an impending victory.

Of course, the president has made clear that he expects that any re-election success might come not from the voters themselves, but from his stacked judicial branch, including if necessary the newly hard-right Supreme Court. Still, based on his demeanor Tuesday, it's clear that Trump is starting to feel the strain.