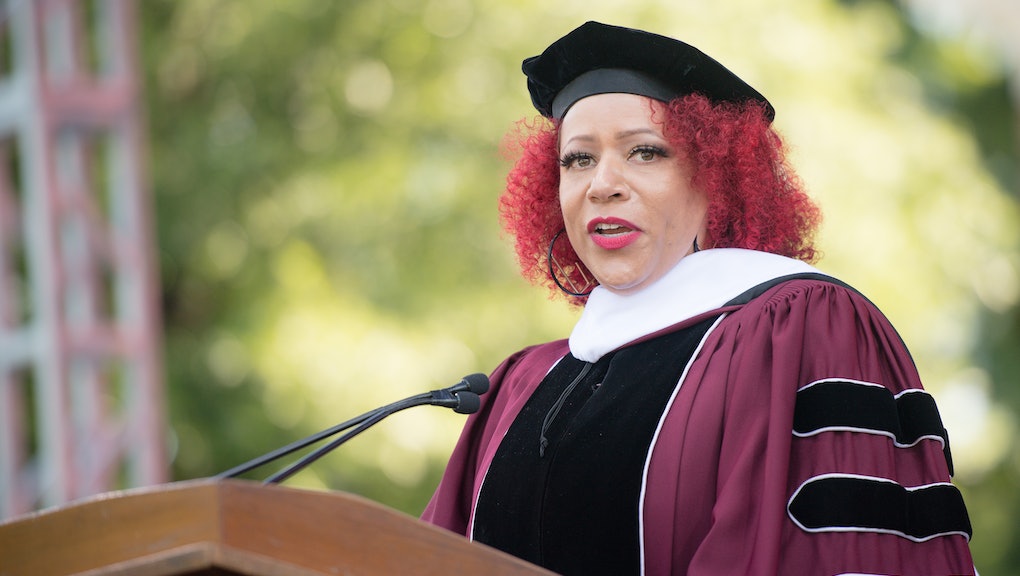 Nikole Hannah-Jones refused to be blinded by white prestige

Everything that glitters isn't gold, and racism isn't negated by awards.

During a sit-down interview on “CBS This Morning” with Gayle King, Pulitzer Prize Award-winning journalist Nikole Hannah-Jones announced her decision to decline University of North Carolina (UNC) at Chapel Hill's offer of a teaching position and tenure — the latter of which UNC only offered after months of backlash and public pressure. Instead, Hannah-Jones — who created The 1619 Project — will take her talents to Howard University, where she will serve as the school's first Knight Chair in Race and Reporting, a position endowed by the Knight Foundation.

Hannah-Jones's choice comes after UNC announced in April that the journalist would be joining the Hussman School of Journalism and Media as the Knight Chair in Race and Investigative Journalism — but without tenure, a job-security designation granted to all previous people holding the position, who all happened to be white. In May, UNC-Chapel Hill's Board of Trustees Chair Richard Y. Stevens told reporters that white trustee Charles G. “Chuck” Duckett raised questions about the Hannah-Jones' tenure appointment, thus delaying a vote scheduled to take place in January. The vote never happened, and Hannah-Jones was offered a five-year contract without tenure instead.

While Hannah-Jones initially accepted the position, Black students and faculty derided and protested the lack of a tenure offer — and in June, Hannah-Jones shoved the consolation prize right back in UNC's two-faced grill. In a letter sent to the school, Hannah-Jones' lawyers stated that, "since signing the fixed-term contract, [she] has come to learn that political interference and influence from a powerful donor contributed to the Board of Trustees’ failure to consider her tenure application" and that she would only move forward in the role if it came with tenure.

In her interview with King, Hannah-Jones further expressed the belief that conservative opposition to The 1619 Project was at the root of the issue. "It’s pretty clear my tenure was not taken up because of political opposition because of discriminatory views against my viewpoint and I believe my race and my gender,” she said.

UNC ultimately reversed its decision — on the last possible day to hold a vote, following a three-hour session that took three hours too long to come to a common sense conclusion — but by that time, the damage had been done. What was once a prestigious designation was now sullied by racism. If it takes student protests, Black faculty members resigning, and a national scandal to offer a Black Pulitzer Prize Award-winning journalist what every white person before her received, then it was no longer an award — it was an excuse.

Following Hannah-Jones' rebuff of UNC's too-late tenure offer, members of the journalism school's faculty shared their support via a Medium post, leaving no room for misinterpretation. "The appalling treatment of one of our nation's most-decorated journalists by her own alma mater was humiliating, inappropriate, and unjust," the statement, titled "Racism and Reactionary Politics Kept Nikole Hannah-Jones from joining UNC," read. "We will be frank: It was racist."

Hannah-Jones' experience reaffirms an insidious truth: Black greatness is seen only as equal to white mediocrity. In 2015, the Economic Policy Institute reported the unemployment rate for college-educated Black people was the same as for white people who had not finished college. And this issue has plagued UNC for years. Last week, Dawna Jones, chair of the Carolina Black Caucus and assistant dean of students at UNC, told CNN Black faculty members have long been overworked, denied promotions, and tasked with additional responsibilities without additional pay. “We feel as though we are being treated much differently than our (White) counterparts,' Jones told CNN.

Outside of UNC, in the past couple years, a Black U.S. Air Force pilot, a Black doctor at Seattle Children's Hospital, and a Black global manager of diversity at Amazon all quit for the same reason: racism. In cases like these, quitting isn't a sign of failure, but a defiant reminder of an individual's worth. Companies like Amazon, which have publicly supported Black Lives Matter, mask their diversity issues by parading around a select few of their high-ranking Black employees as a sign of progress — but a prestigious title is pretty meaningless if it's covering up racism and inequitable treatment of employees of color.

In Hannah-Jones' case, her decision to join Howard University instead of UNC is a sign that she refuses to be blinded by white prestige and bail out a university that has allegedly routinely treated its Black faculty as lesser-than. On paper, Hannah-Jones may have gotten what she wanted from UNC, but at this point it's not enough — because there's no price you can put on self-respect.