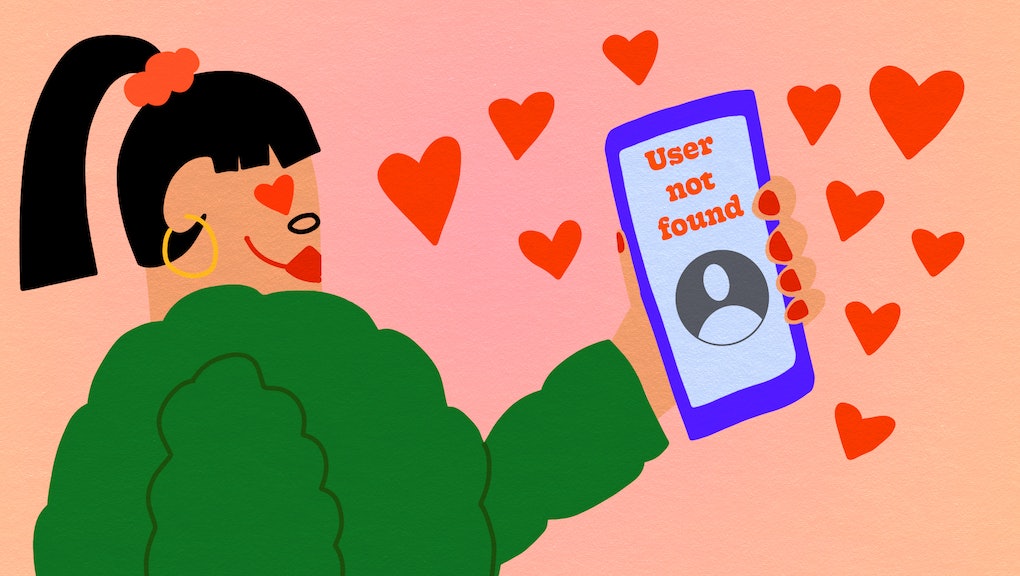 The first thing I do when I match with someone on a dating app is google them. It feels important to know from the jump if someone is, say, a raging psychopath or — worse — a vocal conservative. If they’re on social media, though, I opt not to troll because I’m not interested in seeing someone’s awkward “pick me” selfie face before we even kiss. If they’re not on social media at all, I am instantly intrigued. Just the idea of a person being so confident that they don’t need to be validated by likes is like a magic boner pill to me. It’s hard for me to explain why I think dating someone with no social media is hot, so I decided to search for a little clarity on it.

“It can seem very mature to make a decision to avoid the often shallow, hyper-commercialized, internet echo chamber,” Stefani Goerlich, a Detroit-based psychotherapist. I agree; it seems like if someone isn’t wasting their time looking interesting on the internet, they may actually be interesting people IRL. That interpretation may be partially based on how rare social media abstinence is right now.

“People who make this decision may be seen as iconoclastic and exceptionally self-confident, since they are choosing to forego the instant gratification of upvotes, likes, and gif reactions,” Goerlich explains. There is, indeed, nothing hotter than a self-assured person. The correlation between self-confidence and attractiveness is not just folk wisdom. Recent studies suggest that women find men who appear more confident more romantically desirable, and social scientists are hard at work to decode exactly what role confidence plays in attraction.

Another reason why a Instagram-less person is hot to me is that social media can feel like a real barrier to getting to know someone. “People are recognizing that the internet is a false reality — even when we fill it up with snapshots of our actual, day to day realities,” says Goerlich. When someone opts out of that virtual world, you aren’t forced to wade through pages and pages of potentially inaccurate representations of them to figure out who they are. In other words, when someone doesn’t do social media, it makes them seem more “real.”

Goerlich says that abstaining from social media might not just be an initial point of interest, it can also help people in relationships maintain interest. “Some people might feel closer to their partner as well, since they are better able to dedicate their time and attention without the distraction of ‘pocket friends,’” says Goerlich. “In the same way that putting down a video game controller or closing a book creates opportunity for eye contact and connectivity; it can feel very attractive to know that our partners are prioritizing their relationship with us over the latest viral TikTok trend.” Basically, someone who isn’t social media obsessed might seem more able to pay attention to the person they’re dating.

It’s not just me who thinks it’s hot when someone keeps a low (or non-existent) social media profile. Recently, a slew of celebrities have come out as dating “normcore” folks, and the Twitterati is demanding that mixed clout relationships be honored. Bella Hadid and Issa Rae are both boo’d up with mysteriously not famous folks who don’t do the socials. You can probably imagine why powerful and iconic figures like Hadid and Rae might be seduced by the idea of being with someone who isn’t spending time with them just to show them off on IG.

It’s also partially a safety and privacy issue, says Goerlich. “Threats such as identity theft, revenge porn, and brigading by online trolls when one expresses an opinion online are all motivating factors in the move away from living such an exposed online life,” she explains. If someone isn’t active on the internet, they also may be less likely to lash out publicly if things go awry. As a person who has suffered through several very public-on-the-internet breakups, I can confirm that ensuring that someone won’t cyberbully me or try to get people to cancel me feels pretty important to my emotional well-being.

Having a “low clout” partner may not be for everyone, but Goerlich can see why it’s appealing for young people. “[They are] very much aware of the fact that their lives are being commodified and sold- and choosing to opt out of this process is a principled stance for many,” Goerlich says. Laying low on social media, then, may demonstrate not just confidence, but values. These days, sitting out on social media is a way of standing up for real life. And, as Goerlich says, “Let's be real: People who are willing to stand up for what they believe in, even when it means sacrificing some convenient benefits, is sexy AF.”

More like this
What is sploshing, the food fetish that's taking over TikTok?
By Melissa Pandika
How to save your skin from climate change
By Melissa Pandika
'Nine Perfect Strangers' is a deranged portrait of psychedelic wellness retreats
By Erin Qualey
Stay up to date