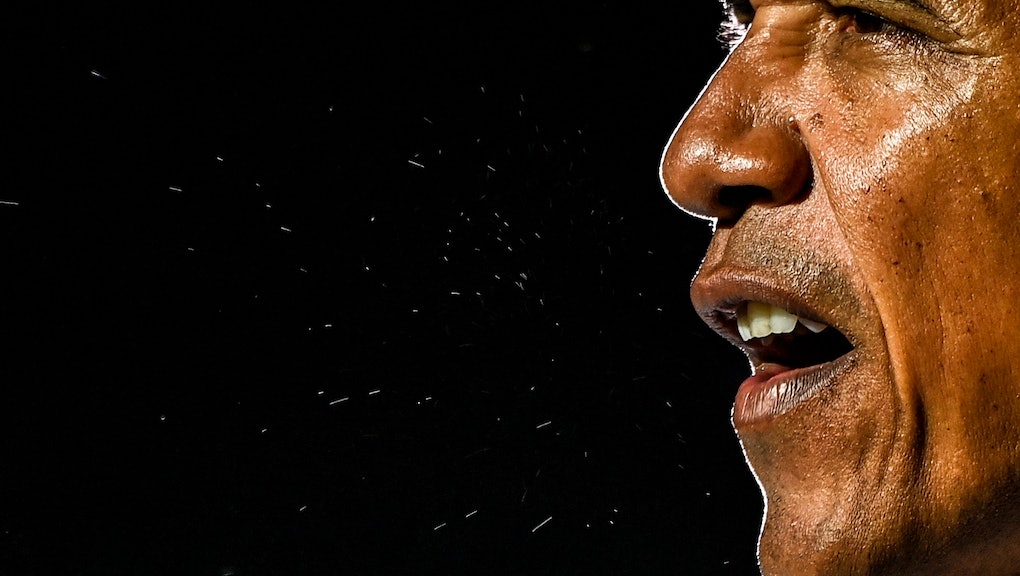 Obama is the last person who should be dissing "snappy slogans"

It feels as if the press tour for former President Barack Obama's A Promised Land memoir has lasted years, and not the scant few weeks it's actually been. Perhaps that's because each media appearance and newly excerpted selection from the book has been a splash of cold water in the face of those who — after four years of the Trump administration — look back at the Obama years as high water mark in modern progressive politics.

From seemingly defending the Boston-area police officer who infamously arrested Harvard Professor Henry Louis Gates for trying to enter his own home ("I could easily picture [Gates] cussing out a cop to the point where even a relatively restrained officer might feel his testosterone kick in") to claiming he "took no joy" in ordering killer drone strikes but had to because he couldn't afford to look weak to Republicans, the past few weeks of Obama's re-emergence into public life are a stark reminder of his decidedly centrist streak that is often lost in the rose-colored nostalgia for the pre-Trump era.

It is in this spirit of committed status quo-ification that Obama spoke with Vanity Fair's Peter Hamby for the latter's Good Luck America Snapchat show. There, he was asked about activists who have led the growing "defund the police" movement, and what advice he would give them.

In response, Obama seemed eager to decry the "snappy slogan" and instead pushed for a more incrementalist, unassuming approach to criminal justice reform.

If you believe, as I do, that we should be able to reform the criminal justice system so that it’s not biased and treats everybody fairly, I guess you can use a snappy slogan, like defund the police, but, you know, you lost a big audience the minute you say it, which makes it a lot less likely that you’re actually going to get the changes you want done. But if you instead say, Hey, you know what? Let’s reform the police department so that everybody’s being treated fairly. And not just in policing, but in sentencing, how can we divert young people from getting into crime? And if there was a homeless guy, can maybe we send a mental health worker there instead of an armed unit that could end up resulting in a tragedy? You know, suddenly a whole bunch of folks who might not otherwise listen to you are listening to you.

Oh boy. Let's unpack this, shall we?

First off, it's worth noting that the man worried about losing a big audience over a "snappy slogan" is the same person who quite literally came to power thanks in no small part to his own glib one-liners and catchy mottos. YES WE CAN remember when a time Obama himself seemed perfectly willing to HOPE people would gravitate toward his campaign on the strength of a political shibboleth.

But the superficial and almost embarrassingly un-self aware optics of someone whose major political achievement is almost universally referred to as "Obamacare" slamming "catchy slogans" aside, there's a deeper issue here with the former president's critique. Like House Majority Whip James Clyburn's recent insistence that "sloganeering" hurt Democrats on Election Day, Obama's derision of the defund the police movement ignores two important truths.

First, it seemingly operates on the assumption that any electoral losses for Democrats from the "defund" (to say nothing of the "abolish the police") movement were entirely self-inflicted. In fact, Republicans have spent years smearing opponents as being "soft on crime" and, in this past election cycle, wielded criminal justice reform as a cudgel against Democrats regardless of whether or not they'd actually supported some sort of defunding or abolition in the first place.

"[Joe] Biden has vowed to defund the police, do all sorts of things to law enforcement that are bad," Trump told supporters during a campaign rally, later following up his attack by sharing a doctored video purporting to show Biden playing NWA's "Fuck tha Police."

In fact, Biden campaigned explicitly on the promise to give law enforcement a $300 million raise. Same goes for Georgia Senate candidate Rev. Raphael Warnock, who has been repeatedly attacked by Republicans for allegedly wanting to defund the police — despite the fact that he expressly does not. Obama's position that "defund the police" as a motto hurt Democrats simply glosses over the fact that conservatives were going to use it as an attack line whether it was real or not. Could progressives have defended themselves against those attacks better than they did? Probably. But assuming the slogan was off-putting as a neutral statement of policy and not because it was used as a bad faith assault on Democrats by a party that has wholeheartedly embraced authoritarianism is either disingenuous, or just dumb.

But there's another truth here that Obama seems to be willfully ignoring: Despite some successful efforts at criminal justice reform during his time in office, the Obama administration presided over a massive increase in police militarization, pushed tens of millions of dollars toward putting more police in schools, and famously invited the "relatively restrained officer" who arrested Gates for a cringe-worthy "beer summit" at the White House.

The issue here isn't whether the Obama administration made policing better or worse — although that's absolutely a worthwhile debate to have. Instead, it's that Obama clearly doesn't believe in defunding the police as a policy to begin with! And that's fine. There's a legitimate case to be made there. But it's not legitimate to make the case that a slogan is to blame for the alleged failures of a movement he doesn't seem to agree with in the first place — especially given what is ultimately at stake.

"It’s not a slogan," incoming Missouri congresswoman Cori Bush explained in a tweet pushing back on Obama's statement. "It’s a mandate for keeping our people alive."

Another incoming representative, New York's Jamaal Bowman, took even sharper aim at Obama's remarks, placing blame for the stagnating debate over defunding police on "America's comfort with Black death — not discomfort with slogans."

Ultimately, if the Biden administration attempts anything even resembling criminal justice reform, it will likely look much more like Obama's vision than that of the activists in the streets calling for radical change. In part that makes a degree of sense: The goals, tactics, and language used by professional politicians, and grassroots activists are often divergent, even if they're pushing in the same general direction. But if the past four years under the Trump administration have shown us anything, it's that the need for new paradigms and ambitious reimaginings of entrenched power structures has never been as urgent as it is today.

More like this
Why grand jury proceedings are so secretive
By Vanessa Taylor
The police killing of Daunte Wright inflames existing anger in Minneapolis
By Rafi Schwartz
Derek Chauvin's former boss, the Minneapolis police chief, just testified against him
By Rafi Schwartz
Stay up to date