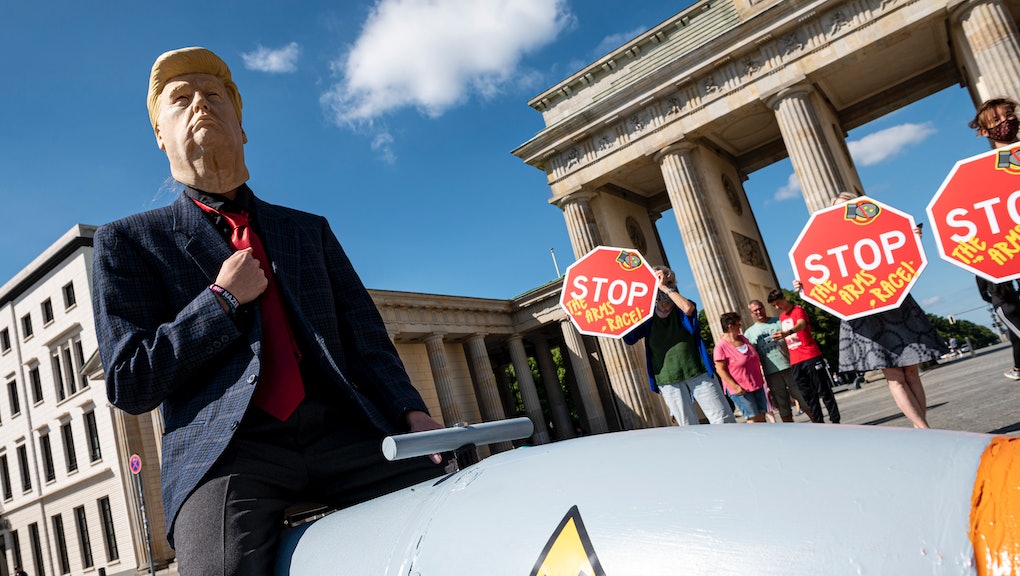 Oh God, do we have to worry about nuclear war now?

These are scary times, what with President Trump's attempted terrorist coup in Washington, D.C., and the tacit (and sometimes enthusiastic) approval thereof by an alarmingly large portion of the GOP. That there are already rumblings of a second insurrection planned for Joe Biden's inauguration only highlights just how dangerous our current precarious position truly is.

In and of itself, that should be enough to terrify even the most cynical among us. But because this is 2021, and despite our naive optimism, things do not really seem to be improving on the previous year, there's a new existential threat to worry about now: atomic warfare.

In a "dear colleague" letter to the Democratic caucus Friday, House Speaker Nancy Pelosi raised — seemingly out of the blue — the specter of a nuclear war instigated by the reportedly increasingly unhinged president of the United States.

"This morning, I spoke to the Chairman of the Joint Chiefs of Staff Mark Milley to discuss available precautions for preventing an unstable president from initiating military hostilities or accessing the launch codes and ordering a nuclear strike," Pelosi wrote, after a paragraph summarizing the ongoing attempts to remove Trump from office by way of impeachment or the 25th Amendment.

"The situation of this unhinged president could not be more dangerous," she continued. "We must do everything that we can to protect the American people from his unbalanced assault on our country and our democracy."

Shortly after Pelosi's letter was made public, a spokesman for Milley confirmed that the general had "answered [Pelosi's] questions regarding the process of nuclear command authority" — seemingly to Pelosi's satisfaction, as she then went on to reportedly tell her colleagues that Milley had assured her there were indeed safeguards in place.

Sooooooo, what the hell does this all mean?

It's entirely possible that Pelosi is simply posturing here, and there's no real, immediate threat that Trump is actually discussing a specific nuke launch. If that's the case, Pelosi's public admission that she spoke with Milley is likely just a move to underscore both her position as being "in charge" while also lighting a fire under the asses of her colleagues who may be slow to get on the "gotta get this guy out now" bandwagon.

That said, if she truly believes there is a legitimate need to immediately begin some nebulous process of securing America's nuclear armaments, then why has she not raised every single alarm available to her and her office? Why would she not fast-track impeachment this very second?

Indeed, Trump does have a longstanding — and certainly alarming — fascination with nuclear weapons and atomic war. "I believe the greatest of all stupidities is people's believing it will never happen. Because everybody knows how destructive it will be, so nobody uses weapons," he mused in an interview with Playboy magazine back in 1990. "What bullshit," he concluded.

Even over the course of his presidency, Trump has hinted at his obsession with atomic weaponry. He's boasted of America's nuclear arsenal on Twitter, and he reportedly pressed campaign advisers in 2016 about using atomic bombs.

Meanwhile, there is growing concern that Trump could end his presidency by starting a war with Iran, in which there's no telling what measures he would deem appropriate for use. And this past fall, Trump tweeted that any Iranian hostility toward the United States would be met with "an attack on Iran that will be 1,000 times greater in magnitude!"

Which leaves us with one more thing to worry about for the next two weeks. As if we weren't scared snotless already.