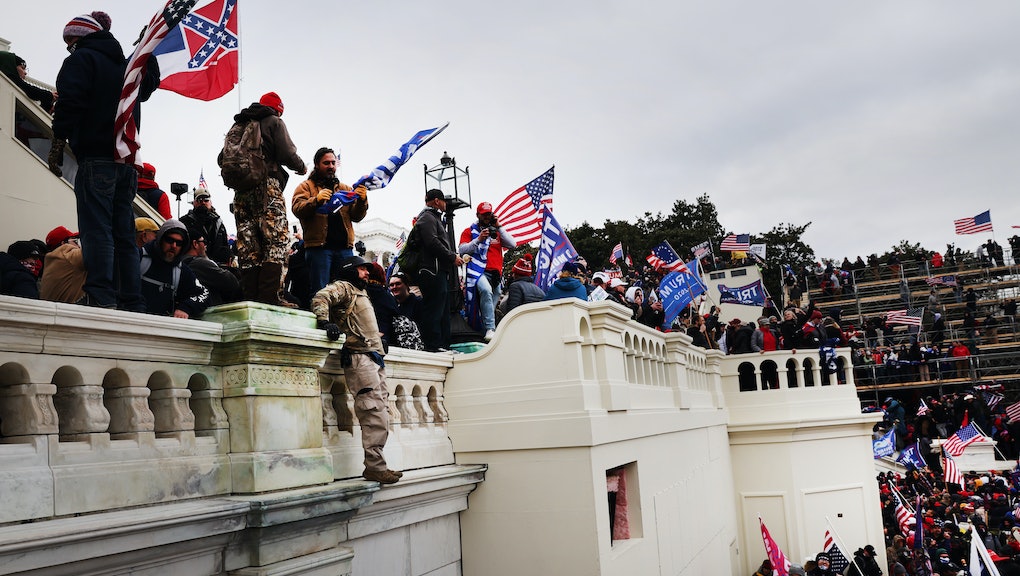 Probably bad that nearly half of Republican voters support the coup attempt, right?

At the time I'm writing this, we're less than 24 hours out from President Donald Trump's brazen coup attempt, in which he incited and encouraged his most fervent supporters to storm the United States Capitol in a blatant attempt to hand him a second term in office — if not more.

There's a lot we don't know about our current free-fall into truly uncharted territory. We don't know how this will end; we don't know if anyone will actually be held accountable; we don't even fully understand what, exactly, took place during Wednesday's siege on the halls of Congress. What is becoming abundantly clear, however, is that a sizable portion of the Republican Party is absolutely fine with the president's militia-powered putsch.

In a just-released poll conducted by YouGov in the immediate aftermath of Wednesday's coup attempt, nearly half of registered GOP voters (45%) approved of what occurred in Washington, compared to fewer than 5% of Democrats. Taken in aggregate, just over 1 in 5 voters overall approved of the siege on the Capitol.

The same YouGov poll, which drew from 1,397 respondents, also found that a majority of Republicans — 52% — believed President-elect Joe Biden was either "a great deal" or "somewhat" to blame for Wednesday's insurgency. Biden on Wednesday was home in Wilmington, Delaware, not inciting a riot.

"The partisan difference in support could be down to differing perceptions of the nature of the protests," the poll's authors explained. "While 59% of voters who are aware of the events at the Capitol perceive them as being more violent than more peaceful (28%), the opposite is true of Republicans. By 58% to 22%, Republicans see the goings-on as more peaceful than more violent."

That could also explain why 50% of Republican respondents opted to describe the MAGA-addled mob that stormed and vandalized the Capitol as simply "protesters," while another 30% went with "patriots," just like Ivanka Trump.

While an overwhelming majority of Republicans rejected the idea of removing Trump from office after Wednesday's events, there is a sliver of good news in the poll. Half of all registered voters do say it's appropriate for the president to be pulled from power, with another 7% unsure. With the new push to either impeach, or remove Trump from office through the 25th Amendment, already well underway, it remains to be seen how long those last few holdouts somehow without an opinion can stay comfortably on the fence.