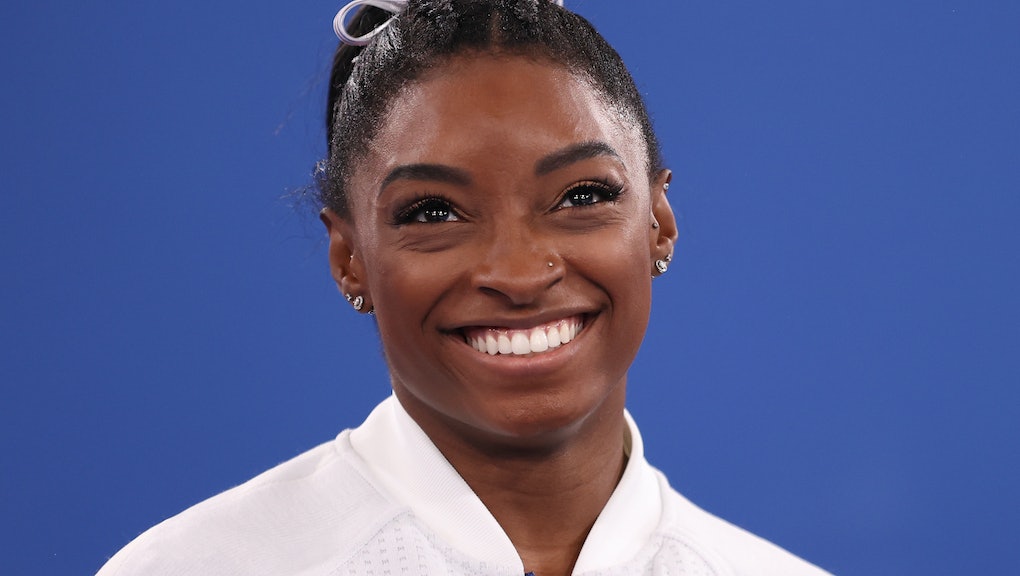 Olympics or not, Simone Biles will always be gold

The American women's gymnastic team won silver at the Tokyo Olympics on Tuesday, even after their star athlete pulled out of the competition. Simone Biles shocked the sporting world by withdrawing from the final after it had already started, later explaining she wasn't in a good place mentally to execute her signature difficult and dangerous moves. The greatest gymnast in history cheered on her teammates in their remaining events from the sidelines, while Jordan Chiles took her place on the balance beam and uneven bars.

At 24, Biles faces challenges that didn't plague her five years ago, when she won four gold medals (and one bronze) at the 2016 Rio Olympics. A month ago, after a couple of uncharacteristic errors at the U.S. gymnastics trials, some speculated she was injured. "I’m just old," she explained. "I’m always in pain. Something always hurts." Biles might be "getting old" for a gymnast, but she's still incredibly good at the sport. Even on a bad day, she outstrips the competition. At the U.S. trials, she was heard saying "those sucked" and "I want to die" after subpar performances on the vault and the balance beam. She placed second anyway. But Biles is under immense pressure to maintain G.O.A.T. status, and it sounds like she's really hard on herself.

It's impossible to understand what that must feel like, but the superstar has given us glimpses. "I truly do feel like I have the weight of the world on my shoulders at times," Biles wrote on Instagram, after a shaky qualifying round at the Olympics. She still made it to the finals, placing first in all-around competition and first in vault, but she finished second on the floor routine, normally one of her strongest events. "I know I brush it off and make it seem like pressure doesn't affect me, but damn, sometimes it's hard," she confessed. "The Olympics is no joke!"

When Biles botched her vault in the team final on Tuesday, she decided to prioritize her physical and mental wellbeing. "No injury thankfully," she said after competition. But she recognized she wasn't in the right mindset to go for gold: "I didn't want to do something silly out there and get injured. So I thought it was best if these girls took over and did the rest of the job," Biles told press. "They should be really proud of themselves for how well they did last minute, having to go in."

Seeing her sidelined at the Olympics was heartbreaking, and Biles said she feels "super frustrated" about how things played out. But there is so much to praise about how the world-class gymnast made her exit. Biles was a class act explaining her decision to her teammates: "I'm sorry. I love you guys, but you're gonna be just fine," she was heard saying. "You guys have trained your whole entire life for this, it's fine. I've been to an Olympics, I'll be fine. This is your first — you go out there and kick ass, okay?" That's real leadership.

It's also revolutionary to witness one of the world's most famous athletes prioritize her mental health above all else. The Games' other superstar, Naomi Osaka, suffered similar Olympic heartbreak on Tuesday when she was knocked out in the third round of competition. It's been a rocky year for her. She's been radically transparent about the anxiety she grapples with as a tennis superstar, and she took drastic steps to protect her mental health, skipping two Grand Slams this season. She hadn't played in a while and didn't seem to be in top form at the Olympics, however. No doubt she's disappointed, but I really hope she's gentle with herself.

When you're as good as Biles and Osaka, the competition is with yourself, really. It's a mental game perhaps more than a physical one. But it's also really necessary for athletes to admit when the pressure isn't motivating, just debilitating. And we, the fans, need to give them the space and support to heal and rise to dazzle us with their talents again someday. I'll be cheering for them again when they're ready.

More like this
How many times must victims relive their trauma in the Larry Nassar case?
By Chloe Stillwell
Colin Kaepernick's new Netflix documentary highlights the man behind the icon
By Keith Nelson Jr.
The moral of Nicki Minaj and the Tale of the Giant Balls? We need to explain vaccines better
By Kara Weisenstein
Stay up to date