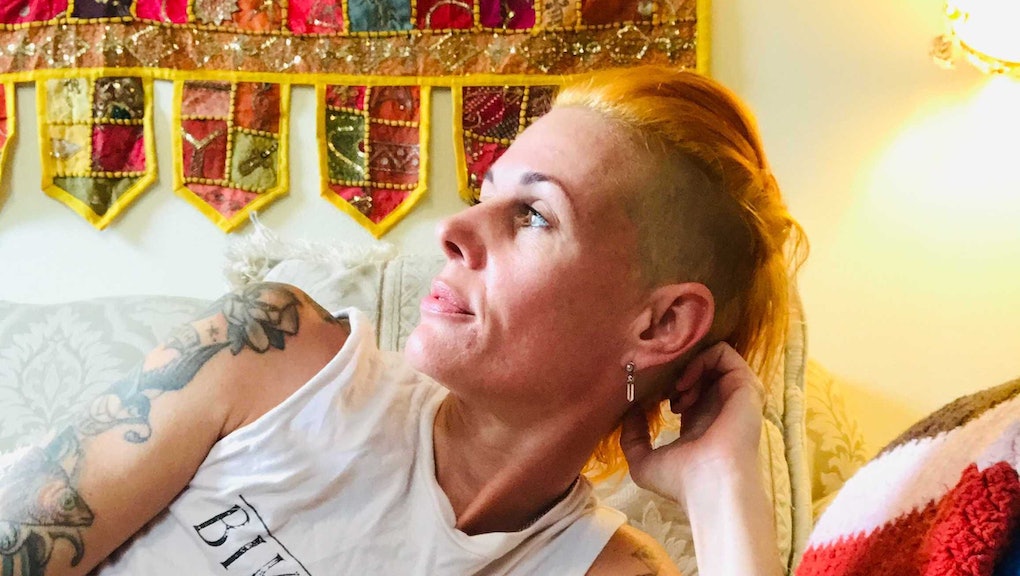 On unlearning gender norms: Will I ever stop acting like a girl?

Early last year, in the Before Times, I was at a small party with a guy I was considering dating. We were having a healthy debate about I-don’t-remember-what that started to get heated. His voice got louder and louder. At first, I pushed back and raised my volume to meet his. I was in the middle of a sentence when he yelled, “Men aren’t even allowed to talk anymore!” The room went entirely still and everyone in it looked at me. I took a breath, smiled coquettishly, and said in a low tone, “You seem to do okay.” I think I may have even batted my eyelashes. Ugh.

What the actual fuck happened there? Instead of calling this guy out on his mainsplaining bullshit, I did exactly what I have been trained to do as a person assigned female at birth (AFAB). I flirted.

What was I thinking? Well, honestly, I wasn’t thinking. I was scared. I have a tendency to freeze when men raise their voices in anything that could be anger. But I wasn’t in any actual danger — I was in a group setting full of friendly folx and even the dude in question wouldn’t have actually harmed me. If I had called him out, he probably would have even apologized.

But that’s not what I did, and I have been thinking about that moment ever since. I crafted and recrafted replies ad nauseam. I vague-posted about him. I finally blocked him from my numbers so that I would just stop the endless cycle of writing texts that I would never send. And then I hated myself. I mercilessly berated myself for my unfeminist behavior. I have vowed to unlearn my own very gendered behavior, but I don’t know how. So, I asked a psychologist to help me figure out how to stop “acting like a girl.”

For context, I'm a queer non-binary feminist. Growing up, I was a rebellious punk riot grrl, so I have never bought into the idea that people born with dicks are superior on any conscious level. I’m also unabashedly feminist, intellectually confident, abundantly educated, and generally quick to speak my mind. You might assume that I am exactly the kind of person who is always ready to call men out. I wish that were the case.

Unfortunately, my habit of making men comfortable runs pretty deep. “The way internalized misogyny starts is through explicit and implicit messages we’re inundated with from birth, so they do get embedded quite deeply by the time we’re aware of it,” Dulcinea Pitagora, a psychotherapist who specializes in working with people of marginalized sexual and gender identities in NYC, explains. So, then, while I am aware of the moments in which I am acting like a “bad feminist,” as an AFAB person raised in patriarchal misogynist culture, I learned a lot of habits of thought and behavior that aren’t actually that easy to change.

The reason these gendered habits aren’t easy to change is part culture, but it’s also part physiology. “During early developmental stages, our brains are meant to absorb everything, and we learn by mirroring others around us,” Pitagora says. In other words, we start mirroring gendered behavior that we see around us even before we have the language to understand the very notion of gender.

This is not because children are unquestioning automatons, though. It’s because our developing brains are innately intelligent and they develop in concert with the social structure. Basically, we learn how to be part of the social world by watching how other people in it behave and then we mimic those behaviors.

The good news is that just because we learned gendered behavior as children doesn’t mean that we can’t do anything about it. “As adults — specifically by our late 20s — our brains have developed to the point of being able to grapple with complex and complicated concepts like internalized misogyny,” Pitagora says. “We have internal and external resources we didn’t have as children and adolescents, so we’re better equipped to resist it and to unlearn it.”

Becoming aware of this internalization is the first step toward exorcising it, Pitagora tells me. They recommend taking a trauma-informed approach to unlearning internalized misogyny. “Dealing with misogyny is traumatic,” they explain. “One of the important things to realize—and this is also part of the trauma-informed approach—is that this was not your fault, you didn’t create misogyny, and you were defenseless against it as a young person.”

In other words, we all learned that AFAB folks are lesser and we learned to behave accordingly. It feels important to note that acknowledging the reality of the patriarchy is not the same as accepting it or agreeing with it. You have to acknowledge that you are part of an oppressive system in which you were unwittingly complicit in order to start unlearning compliance, and unlearning the violence of misogyny requires self-compassion.

“Blaming yourself and giving yourself a hard time are not going to help, in fact they’re counterproductive, because when you’re engaging in negative self-talk, you are engaging in a misogynistic act,” Pitagora explains. So, for me, that means letting go of the idea that because I haven’t always spoken up to men, I am a “bad” feminist. Yes, says Pitagora. “The best antidote is leaning into self-compassion and self-love,” they say. “These are the opposites of misogyny, which teaches AFAB people to belittle and hate themselves.”

All the obsessive overthinking I’ve been doing, then, is actually a symptom of existing in a patriarchal system that expects me as an AFAB person to behave perfectly, but the key is not to try to shame myself out of it. That’s another misogynistic move. “Realize that the guilt and shame are not coming from you, those thoughts and feelings are part of what you internalized,” Pitagora suggests. For my part, I’m going to let go of that “bad feminist” feeling and accept that I am not going to be able to perfectly revolutionize my behavior overnight or in every single moment.

Misogyny is embedded in the world we live in. When we are engaging with people who have more social and structural power than we do, our brains respond. “Part of our brain understands that there may be someone in the room who has incidental power over us through institutional patriarchy,” Pitagora says. “If it feels dangerous to our sense of stability, we are more likely to hang back, and find a different way or wait for another day when we feel stronger, more able to disrupt and interrupt systemic misogyny.”

There is a difference between being complicit, and picking our battles, however. We absolutely can create new feminist ways of being, but we have to be strategic.

The way to create new feminist patterns in thought and behavior to replace the old misogynist ones then, is to replace shame with care. That creates a new kind of neural feedback loop. “If we know we’re going to be kind with ourselves when we find ourselves engaging in a misogynistic behavior, we will be more likely to engage with ourselves on undoing and correcting it,” Pitagora says. “Lean into self-love and compassion.”

If compassion seems like a flaccid response to misogyny, well, that perception is a phallic symptom of patriarchal thinking. Self-compassion can be seen as inherently radical when it isn’t reduced to a performative beauty regimen. As Audre Lorde said, “Caring for myself is not self-indulgence, it is self-preservation, and that is an act of political warfare.” Lorde saw the work of self-love as a necessary component of living a meaningful life — both personally and politically. And, as it turns out, her perspective aligns with science.

More like this
How to support Black and Asian American friends without exhausting them even more
By Melissa Pandika
The skin benefits of oat oil, explained
By Joseph Lamour
4 signs you're done with therapy for now
By Melissa Pandika
Stay up to date