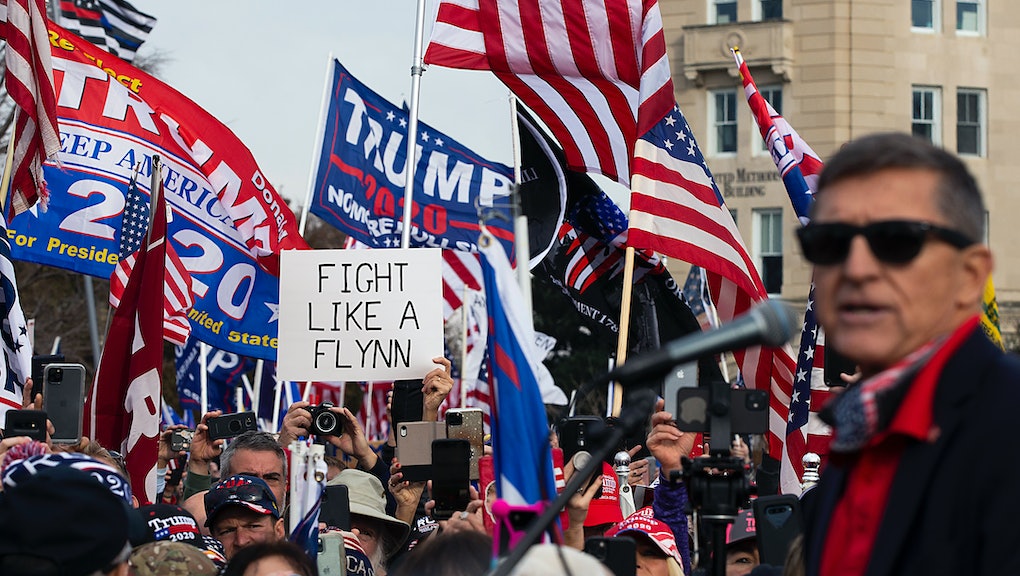 You would think that in the hours leading up to Memorial Day, a retired three star general, former head of the Defense Intelligence Agency, and onetime national security adviser would be a little more circumspect about encouraging a full-blown military coup against the United States government. Alas, when it comes to admitted felon Michael Flynn, the day before Memorial Day was evidently the perfect time to do just that: insist that the U.S. is ripe for an overt takeover of our civilian government by the armed forces.

Speaking Sunday at the QAnon-infused "For God and Country Patriot Roundup" conference in Dallas, Texas ("three days of incredible speakers, awesome entertainment, and pure patriotism!"), Flynn was asked, "Why what happened in Myanmar can’t happen here?" by an audience member who identified himself solely as "a simple Marine."

"No reason," an enthusiastic Flynn responded. "It should happen."

In fact, what Flynn is insisting "should happen" in the United States is an ongoing military junta in which hundreds of protesters have been shot and killed, the democratically-elected head of state has been charged in a secret court, and political prisoners describe routine torture as a means to coerce false confessions.

While this is not Flynn's first foray into the seditious world of conspiracy theorizing (he's an avowed QAnon adherent) or advocating martial law in order to rig a national election ("[Trump] could take military capabilities and he could place them in those states, and basically rerun an election each in those states" he insisted in the weeks following the 2020 presidential race), his comments Sunday mark a significant escalation from his previous martial enthusiasm. Gone is the qualifying "could," and in its place, the imperative "should" — all delivered shortly after declaring that "[Trump] won the popular vote, and he won the Electoral College vote." Taken together, it's easy to see how Flynn's comments serve as a de facto call for armed violence the likes of which we were given a taste of on Jan. 6.

Incredibly, despite having admitted to lying to the FBI (the Trump administration subsequently dropped the charges), Flynn reportedly still enjoys his retired rank of lieutenant general, and his military pension. However, as his comments became public, Lt. Col. Yevgeny Vindman, the twin brother of key Trump impeachment witness Alexander Vindman, tweeted that Flynn remains subject to the Uniform Code of Military Justice, and could feasibly be recalled to active duty in order to face a court martial.

"As a JAG I’m qualified and also happy to prosecute this case," Vindman added.

More like this
Donald Trump's blogging days are over
By AJ Dellinger
Here's a chilling peek into just how close Trump got to running a police state
By Rafi Schwartz
Turns out the feds had a pretty good idea what was coming well before Jan. 6
By Rafi Schwartz
Stay up to date