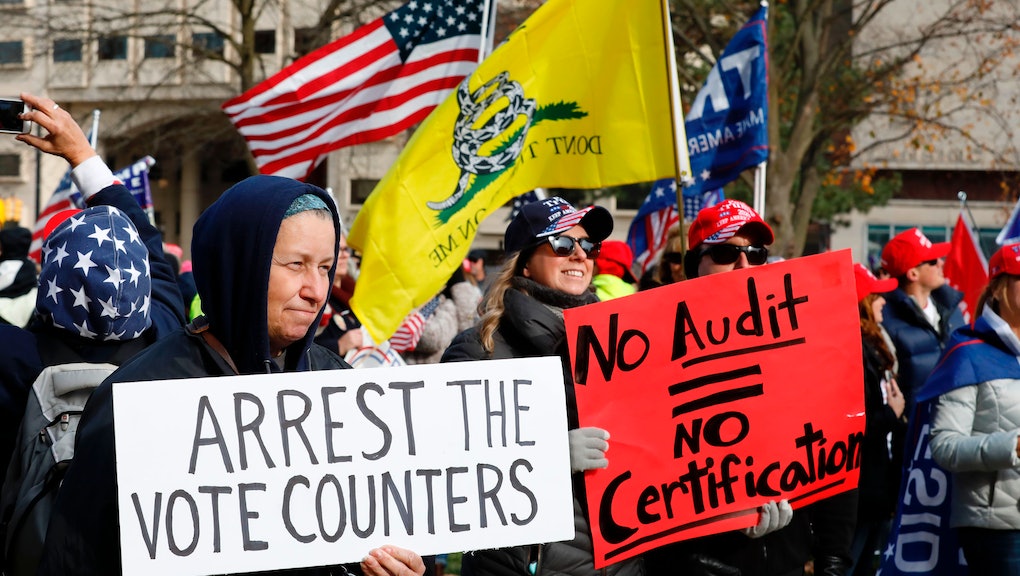 Only 3% of Trump supporters believe Biden won the election, per a new poll

The votes have been counted (and recounted) and the results have been announced. The bushel of hail Mary lawsuits have been filed, appealed, dismissed, and all but laughed at. Countless elected officials, including Republican politicians at every level of government, have been urging the Trump administration to concede and allow the Biden-Harris administration to begin the transition process. The Trump administration finally agreed to hand over the reins to the White House on Monday — and yet, voters still appear to be confused. According to a recent CNBC poll, an alarmingly small portion of people who voted for Donald Trump — a measly 3% — actually believe that Joe Biden won the 2020 presidential election.

That means that of the millions of voters who participated in this record-breaking voting year — millions and millions and millions of them — either believe Trump won the election or aren’t sure who the winner is. CNBC polled 1,203 Trump voters, and 73% of them consider Trump the winner of the presidential election. Another 24% are unsure who won. In the same poll, nearly a third of respondents (31%) want Trump to fight the election results in court, and about two-thirds (66%) say that the president should never concede to Biden, despite losing the election by more than 6 million votes.

Though the president still hasn’t conceded, he has announced that he’ll allow the transition process to get underway. It still remains to be seen how people who voted for Trump will make sense of politics in a post-Trump D.C., but CNBC’s survey shares some insights there, too. Unfortunately, 81% of Trump supporters said they wouldn’t give Biden a chance as president — though that statement is vague enough to seem like a purely emotional answer. On a more interesting note, 75% of the respondents said they’d support expanded rural health care options. Seven in 10 said they’d support the creation of jobs through fixing infrastructure and investing in sustainable energy projects and initiatives, while just under a quarter of respondents support increasing taxes on corporations and people making more than $400,000 a year. And only 13% of respondents support a living wage of $15.

The survey was conducted last week, before Trump allowed his administration to go ahead and begin the transition process. It has a margin of error of 2.83 percentage points.

For issues like a living wage, there’s an entire, vibrant movement and thousands of people working to move and organize people, regardless of who they voted for, to support raising the federal minimum age for $15 an hour. But for the election results, there’s really just … the announcement of the result and then Inauguration Day. There’s no concerted, organized effort to convince voters that Donald Trump lost the election because in any other election, all of the numbers, counts and recounts, data, reports, confirmations from election officials, and dismissed lawsuits from judges would be more than enough.

Instead, this president has successfully gotten his base to give up on the democratic process — well, regarding the presidential election specifically (I suppose the other elections, which went surprisingly well for Republicans, are legitimate?) — and somehow simply refuse to believe the millions upon millions upon millions of completely legitimate ballots cast by Americans earlier this year.

More like this
Trump kept a Gitmo prisoner detained for 5 extra years. Biden has finally freed him
By Rafi Schwartz
As Biden nears an elusive infrastructure deal, Trump is saltier than ever
By Rafi Schwartz
Nancy Pelosi took a stand on the Jan. 6 committee, and it left Republicans whiny as hell
By Rafi Schwartz
Stay up to date