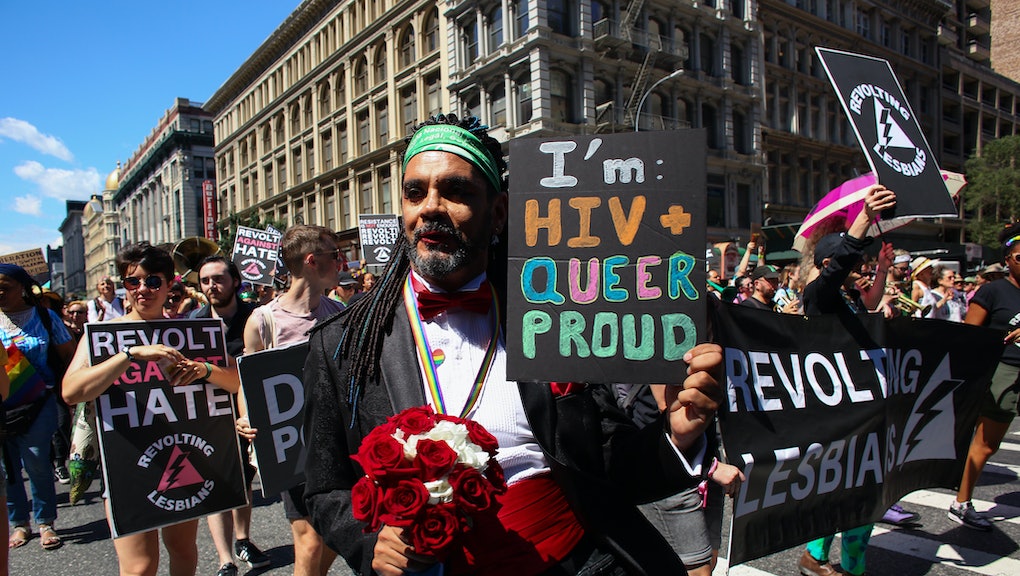 People know even less about HIV than they used to, according to new research

This week, Moderna is starting human trials of an HIV vaccine, which uses the same mRNA technology the company used for its COVID-19 shot. This trial is the first of its kind since the first case of AIDS was recorded in the U.S. exactly 40 years ago, when people so sensitively called HIV “gay cancer.” But while it seems like science has taken a giant leap forward, our culture, somehow, remains several steps behind.

A new survey seeking to find out how much HIV-awareness Americans have yielded some pretty disheartening stats. The research, done by Gilead Science, GLAAD, and the Southern AIDS Coalition, showed a dip in the number of Americans who feel like they’re knowledgeable about HIV — from 51% in 2020 to 48% in 2021.

It's been known for decades that the virus cannot be spread through skin-to-skin contact. In fact, it isn't airborne and is not even spread through saliva or non-penetrative sex, which is really something everyone should know by now.

Also, through really cool medical development, many HIV-positive folx on medication called anti-retroviral therapy (ART) that brings the level of virus in their blood to undetectable levels, according to the CDC. This helps them live totally normal lives as doctors, teachers, barbers, or anything else they want.

Also, it's *super* unlikely for people who are on ART to spread the virus to others, even through penetrative sex. But the Gilead study found that most Americans — 58% — have no idea that this is the case. Even if someone does have an HIV-positive partner, they can take PrEP, which reduces their chances of contracting HIV by 99%.

The study, of course, also found differences in awareness between queer and heterosexual respondents. Half of cishet respondents said they would not be okay with having an HIV-positive partner, compared to 38% of LGBTQ people, as reported by to NBC News.

In some ways, the findings are not surprising. A lack of awareness about HIV permeates the air in the way ignorant people think HIV does. After all, it’s only been one month since rapper DaBaby spewed homophobic misinformation about HIV to thousands of people at a music festival. He's not a one-off, clearly.

But getting rid of stigma around HIV is extremely urgent, considering that infections are going up among adults aged 25-34 and most of those new cases are among Black and Latinx people, according to the CDC. This survey shows that no matter how much the scientific community achieves, the HIV epidemic can’t be eradicated through medical progress alone. It will take a massive cultural shift that will require us to stop other'ing people who are HIV-positive. Hopefully this study is a wake up call to keep educating ourselves and to call out misinformation wherever we may see it.

More like this
Uncontrollable, weed-induced vomiting is on the rise, according to new research
By Tracey Anne Duncan
This anxiety study is a really passive-aggressive reminder that wealth equals happiness
By Ian Kumamoto
Brain scans revealed how racism weighs on Black women's health
By Sierra Carter
Stay up to date