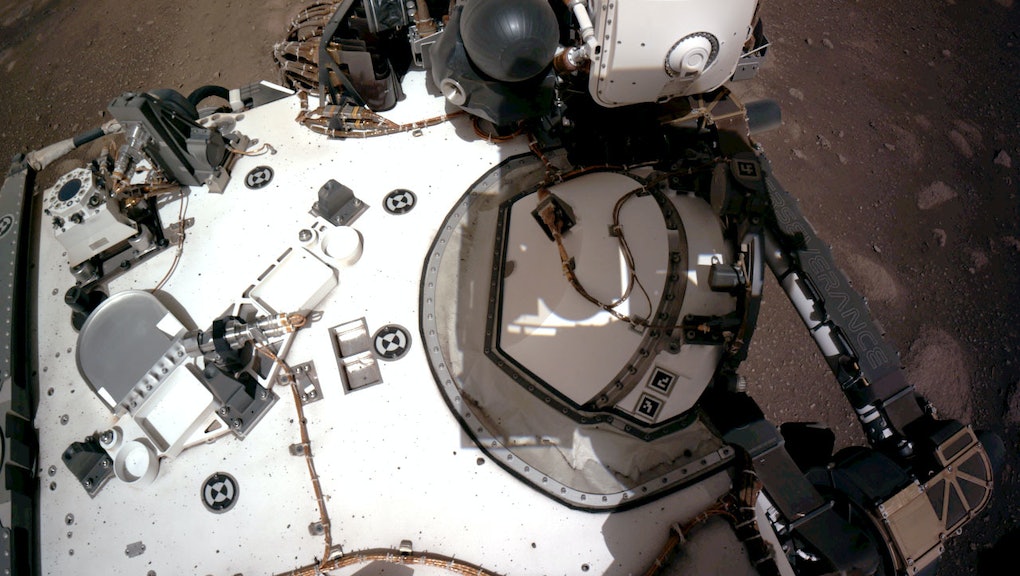 Perseverance, the Mars rover, just made oxygen out of carbon dioxide

There is oxygen on Mars. Well, kind of. NASA announced this week that the Mars rover Perseverance successfully converted some of Mars's carbon dioxide-rich atmosphere into breathable oxygen. It is the first ever successful attempt at producing oxygen on another planet, and could be the first step toward eventually making it possible for humans to live on Mars.

The on-site science experiment was made possible by the Mars Oxygen In-Situ Resource Utilization Experiment, or MOXIE. According to NASA, it's a toaster-sized instrument that contains 3D-printed nickel alloy parts that heat and cool gases that flow through it. This allows MOXIE to convert carbon dioxide into oxygen. It does this by using capturing and heating the CO2 molecules at extremely hot temperatures — approximately 1,470 degrees Fahrenheit. An aerogel holds in the heat, and a gold coating on the outside of the box reflects any infrared heat that could radiate outward and damage the rover. By the end of the process, MOXIE creates oxygen that can be stored, breathed, or used for a number of purposes that will be essential to bringing human life to the red planet.

MOXIE's first test took place on April 20, and was just a small example of what could be a potential breakthrough achievement. Perseverance used its unique instrument to create 5 grams of oxygen, which would be enough to keep an astronaut breathing for about 10 minutes, according to NASA. MOXIE is capable of generating up to 10 grams of oxygen per hour. If you do some quick napkin math, you'll find that conversion rate is probably not going to keep anyone alive for very long, so it's a good thing that MOXIE has a significant head start on any human counterpart.

Of course, Perseverance's main mission is not to serve as an oxygen factory. It's on the planet to explore, seek out evidence of microbial life on the distant red rock, and run experiments to determine if the planet can eventually support life. The oxygen conversion test falls into the last category, but given that atmosphere of Mars is comprised of 96% carbon dioxide, any chance of humans spending time on the planet hinges on being able to create oxygen.

It's not just an important achievement for living on Mars though — it's necessary to return from the planet, too. "Oxygen isn't just the stuff we breathe," Jim Reuter, associate administrator for NASA’s Space Technology Mission Directorate, said in a statement. "Rocket propellant depends on oxygen, and future explorers will depend on producing propellant on Mars to make the trip home." Rockets must have oxygen in order to burn fuel. According to NASA, a return trip from Mars for four astronauts would require 15,000 pounds (7 metric tons) of rocket fuel and 55,000 pounds (25 metric tons) of oxygen. For those same astronauts to live on the planet for a full year, they would require just one metric ton of oxygen to breathe.

"This is a critical first step at converting carbon dioxide to oxygen on Mars," Reuter said. "MOXIE has more work to do, but the results from this technology demonstration are full of promise as we move toward our goal of one day seeing humans on Mars."