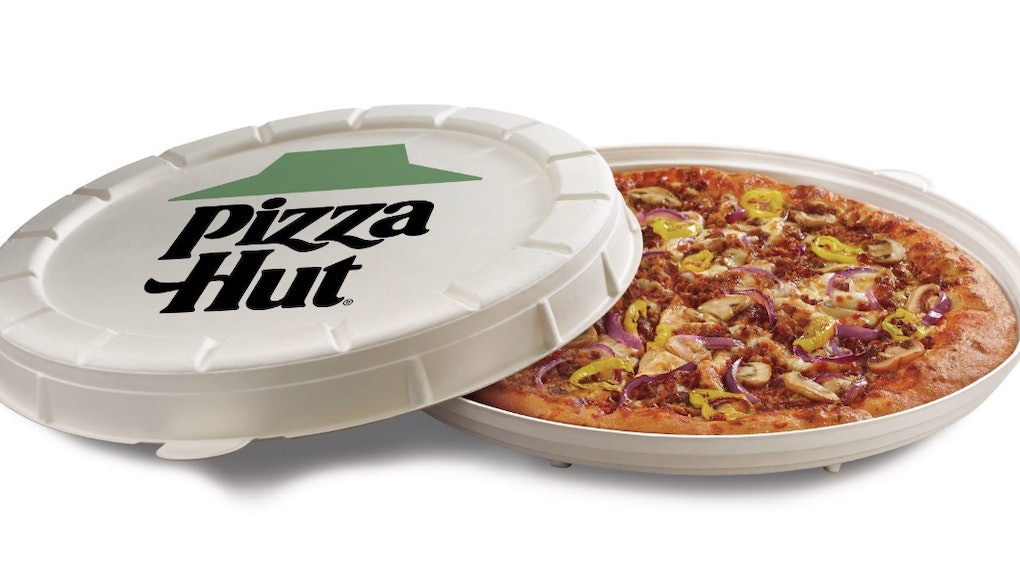 Pizza Hut is the latest chain to hop on the fake meat bandwagon, in an attempt to sate what I perceive as a public demand for eco-conscious junk food. Starting tomorrow, a single location in Phoenix will feature a limited edition Garden Specialty Pizza topped with onions, peppers, mushrooms, and Incogmeato, a plant-based Italian style sausage made by fake meat kingpins, Morningstar Farms.

The unfortunately named plant-based faux meat is made of non-GMO soy, so it’s more akin to Impossible Burger than it is to its own traditional meatless breakfast sausages, which are made of TVP (textured vegetable protein). Like the Impossible Burger, Incogmeato bleeds when you cook it. No one seems to have tasted it, yet, but Morningstar Farms, which is owned by Kellog, is playing defense on questions about why the market needs yet another fake meat offering.

Sara Young, the general manager of MorningStar Farms said in a press release, “We know the number one barrier to trying plant-based protein is taste. These consumers are still seeking the amazing taste, texture, and sizzling qualities of meat but want a better alternative for themselves and the planet."

Only taste will tell and we’ll all have to wait until tomorrow for the inevitable reviews, but honestly, fake meat has come a long way and it seems a little disingenuous to suggest otherwise. Flexitarians and veg heads aren’t really looking for “better alternatives,” anymore. Yes, sure, we can just order pizza without meat on it, but the reality is that we just want to have all the cheese-covered and fast-fried choices that meat-eaters have.

The Incogmeato pizza at Pizza Hut will cost $10, and come in a round, environmentally-friendly box. The new box, compared to the usual square, uses relatively less packaging and is made using sustainable materials, The Verge reported. All the proceeds from the sales of the test market pizza product will go to Arizona Forward, a local sustainability non-profit, per the press release.

While this all sounds like progress, critics and competitors are already expressing their doubts about Incogmeato’s quality and the impact products like it could have on the entire plant-based meat market. "Every time someone uses one of those products and it sucks, it's a setback,” Pat Brown, the CEO of Impossible Burger told Business Insider. Shots taken.

I stopped eating meat when I was 14. Since then, I have stomached every possible veggie trend. I have eaten fakin (fake bacon) that tasted like corrugated cardboard, fermented soy products that smelled like vomit, and every possible kind of soggy lame fake meat burger. So, my message to the naysayers is: Just let me enjoy this fake sausage pizza in peace. Fast food comfort and being really late to trying to save the earth is the American way.

More like this
What is sploshing, the food fetish that's taking over TikTok?
By Melissa Pandika
Delta might be the last COVID nightmare variant we get
By Ian Kumamoto
Studies suggest that Pfizer is no longer the cooler vaccine
By Ian Kumamoto
Stay up to date