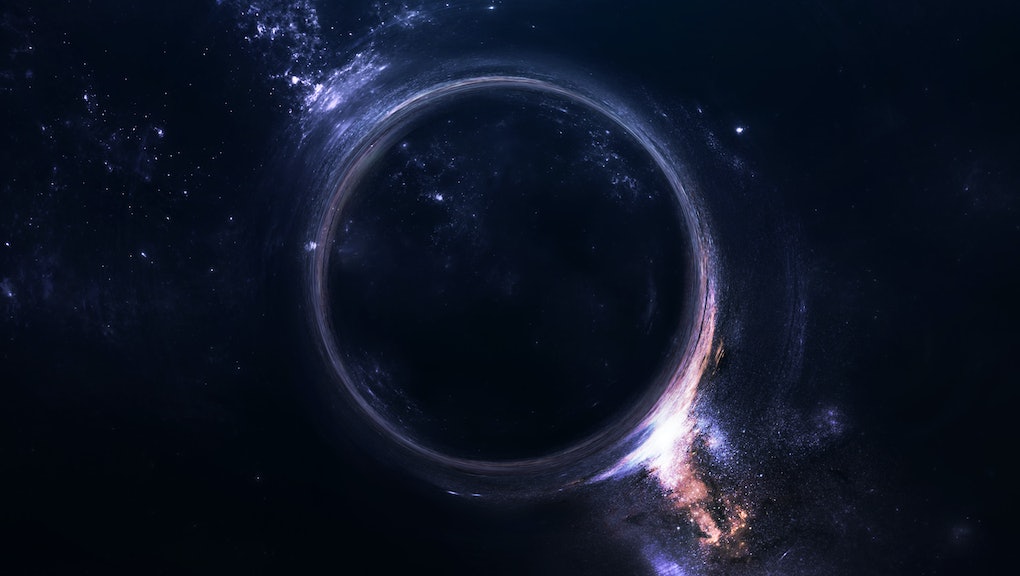 Scientists believe there's another planet out in our solar system. Before you make the joke, no, it's not Pluto. It may not even be a planet, actually. Scientists have been hard at work over nearly five years trying to determine what it could be. Something out there has an extremely large mass out beyond Neptune, and researchers have long thought it could simply be "Planet Nine," or "Planet X."

However, a pair of physicists looking into the enigmatic anomaly have proposed another theory entirely: Suppose it's not a planet at all, but a smaller black hole instead?

A new study published September 24 via the online archive arXiv refers to the object as a potential "primordial black hole." These are relatively (to other black holes) smaller black holes that ended up forming following the "Big Bang" — yes, the incident that supposedly started everything. These "smaller" black holes were thought to have evaporated.

Astronomers Jakub Scholtz of Durham University and James Unwin of University of Illinois at Chicago believe that their potential black hole theory is more than viable, as far-fetched as it may sound.

"Capture of a free-floating planet is a leading explanation for the origin of Planet Nine, and we show that the probability of capturing a primordial black hole instead is comparable," the pair wrote in their research paper.

In the past, studies have shown that "Planet Nine" has a mass around 5 to 15 times of Earth's and is sitting at around 45 to 150 billion kilometers from the sun. This item, black hole or not, wouldn't be getting much light from the sun in that case, and wouldn't be very visible from telescopes. Given that black holes are nearly invisible, it would be difficult to detect anyway.

Scientists are able to look for signs that black holes exist (as well as planets) thanks to "bends" of light around these objects. They would show up as strange visions of light that would change often, as the object orbits and changes its trajectory. But if the item ends up being a black hole, physicists suggest that instead of light, it would instead be surrounded by a massive stretch of dark matter up to around 1 billion kilometers on every side.

Dark matter is a type of matter that scientists believe takes up about 85% of matter in the entire known universe. It's called "dark" because it doesn't seem to interact with light and is as such invisible to the electromagnetic spectrum entirely. For this reason, it cannot be detected using typical instruments researchers use to investigate phenomenon in our universe.

The types of interactions in the band of dark matter that would presumably surround said black hole would include flashes of gamma rays that might give away the object's location. This would be a viable clue for scientists to figure out if a black hole is indeed what they're seeing or if it's a planet after all.

Physicists plan to begin going through multitudes of data that's already available via the Fermi Gamma-ray Space Telescope that's been orbiting Earth and covering sky events since 2008. They'll be looking to find and define gamma ray flames that could be moving across the sky, which could in fact be seen from Earth.

Whatever the object ends up being, whether a planet or a primordial black hole, perhaps the most interesting aspect of this mystery will be solved once and for all when that data is finally analyzed. It's important information, of course, to know whether there's a black hole in our universe just, you know, hanging out.