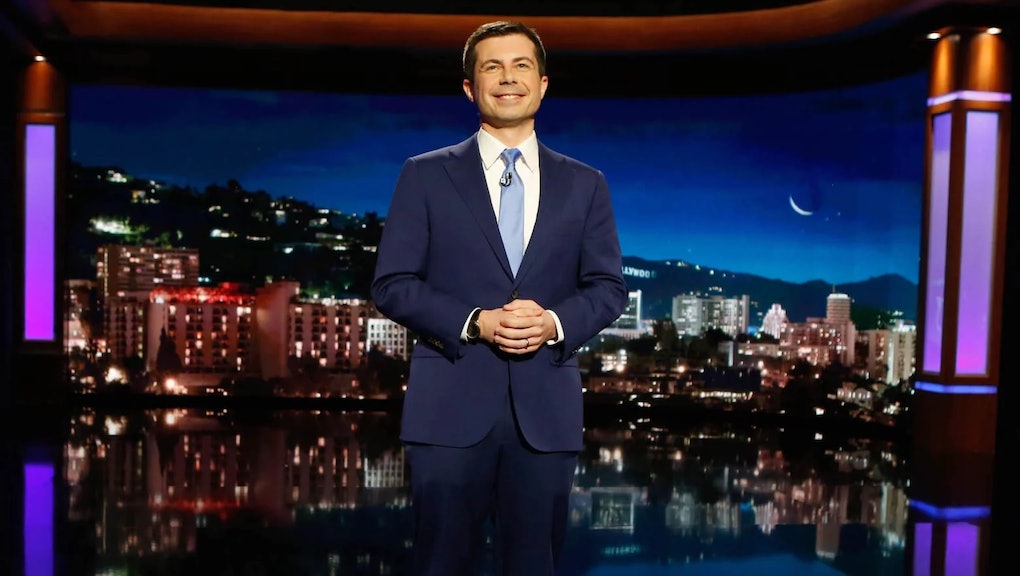 When Pete Buttigieg announced that he’d be filling in for Jimmy Kimmel Live, it didn’t seem like there could be a stranger late night story this week. Evidently “Pete Buttigieg hosts Jimmy Kimmel Live with no public audience due to the coronavirus outbreak” would top it in just a matter of days. On Thursday night, Buttigieg took the stage to a skeleton audience consisting of only Kimmel staff members, close friends, and his husband Chasten, many of whom were wearing his campaign shirts.

This would be somewhat bleak on its own, to have a past presidential candidate with no entertainment credentials assuming a national spotlight in this way, but the finished product went to another level of surrealism. During a 12-minute monologue, Buttigieg addressed our panicked national moment by calling on viewers to bug their representatives to pass emergency relief legislation.

But when it came time for the jokes, his makeshift audience cranked up the volume and, in order to avoid another “please clap” moment, the show edited in crowd footage and reaction gifs after almost every zinger. “When you don’t have a real audience, you have to fake one,” Buttigieg said. “Just like Trump’s inauguration.” Got him!

He also explained why Kimmel asked for a break — he’s apparently off filming the revamped Who Wants to Be a Millionaire?, which does that even have a studio audience? Then, it led to a sketch where the newly unemployed Buttigieg gamely vied for a job at Wetzel’s Pretzels, leaning on his hyper-qualifications for just about everything but normal human stuff. After this, there was a pretty amusing rendition of democratic primary Unnecessary Censorship.

Every other late show but James Corden debuted the audience-less reality before suspending production indefinitely. Meanwhile, over on NBC, Jimmy Fallon was interviewing Dr. Oz about coronavirus in front of an empty studio. Despite his dubious credentials and past bouts of misinformation, he’s somehow become NBC’s go-to medical expert for the coronavirus. Just earlier this week, he relayed his advice to the elderly William Shatner, part of the age group most at risk from the virus. “He can go anywhere he wants. Do not make decisions based on fear… We’ve gotta live our lives.”

Later that night on NBC, Seth Meyers, for his part, attempted to wade through the morass of misinformation during the public health crisis. In casual clothes, he explained that original plans for the show that night were scrapped, with guests canceling their appearances, but Meyers still went on with the Closer Look segment they’d prepared the previous day.

While much uncertainty and dread linger about how much worse this could all get — most every indication points to exponentially worse — what’s becoming clear is that this combination pandemic-global recession will also feel a lot like the 2008 writer’s strike.